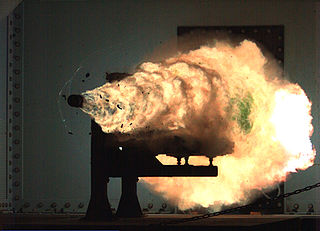 Military.com reports the Navy has finally ended the railgun program. What caught my eye was a reference to other services’ abandoned futuristic weapons. What each had in common was strong support over many years from the military-industrial complex: a uniformed proponent, Congressional support, and defense contractors. I started my military career in the 1980s just as the Sergeant York air defense gun system collapsed under spectacularly bad testing results, so can sympathize.

Railguns were supposed to be the new super cannon, a system in which you impart energy to a projectile at launch, then have it go ballistic the rest of the way to a target. Notionally, this is more efficient than packing propellent into the projectile, in the form of a rocket or missile. However, the big guns of World War II battleships set the peak for traditional cannon “tube” artillery. Railguns were supposed to be a revolutionary next step in rank and energy delivered to a target. They involve no combustion, instead relying on a set of rails electrically charged like one polarity of magnets, with the projectile holding the opposite charge being flung down the length of the rail, repelled by the rails’ charge.

Unfortunately, they have proved unworkable. The basic construction fails under single or repeated shots, destroyed by the energy imparted at initiation. At the same time, the energy budget for each shot is far beyond all but a handful of ships in the fleet. It just takes far too much electricity to charge capacitors to deliver the sudden burst of energy to the rails.

The railgun will now join the ranks of other costly, yet never implemented weapons programs like the Future Combat Systems, Comanche helicopter, and Next Generation Cruiser projects.

The end of the railgun program was foreshadowed last month when a White House fiscal budget for 2022 revealed the Navy pulled funding for the Gun-Launched Guided Projectile — a meter-long projectile first developed exclusively as a round for the experimental railgun.

“The decision to pause the EMRG program is consistent with department-wide reform initiatives to free up resources in support of other Navy priorities [and] to include improving offensive and defensive capabilities such as directed energy, hypersonic missiles and electronic warfare systems,” the Navy’s statement said.

The Future Combat Systems and Comanche helicopter were both Army dreams. The FCS was supposed to save lots of money by a common core platform on which everything from the successor to the M1A1 Abrams tank to infantry and self-propelled artillery vehicles would be built. It was doomed from the outset, but held out year after year as the Army’s mechanized future. The Comanche helicopter concept came along as the Soviet threat was crumbling. It was supposed to the Army’s stealth aircraft, a light scouting and attack helicopter that could survive in a Soviet technology high threat environment. A stealthy helicopter is still perfectly visible and slow enough for all manner of ground and air countermeasures. Still, the idea hung on from 1991 to 2004.

The Navy railgun advocates, like the “gun mafia” in the Army Air Defense Artillery community, wanted a futuristic gun, a 21st Century super battleship delivering hard science fiction style performance in competition with the aviators and missile crews. It appears, for now, that tubes or rails are just not going to outrange missiles, rockets, and air-delivered munitions. Yes, tube artillery will still have an important place, but will not really be the king of the battlefield or the seas. Further, the Navy will either have to accept the risk of pulling in closer to shore with naval guns or rely entirely on missiles and aircraft, facing enemy missiles and aircraft in a battle of range and lethality.