Charles Murray has a new book out, which I completed a couple of weeks ago.  The full title is Facing Reality: Two Truths About Race In America.  I recommend the book to all of you.  I will attempt a relatively brief review.

I doubt that I can improve on the brief summary at the website of the publisher, Encounter Books (here):

The charges of systemic racism and White privilege that are tearing the country apart float free of reality. Two known truths, long since documented beyond reasonable doubt, need to be acknowledged and incorporated into the ways we approach public policy: American Whites, Blacks, Latinos, and Asians have different rates of violent crime and different means and distributions of cognitive ability. These two truths drive the problems in policing, education, and the workplace that are now ascribed to systemic racism. Facing Reality lays out the evidence clinically and in detail, without apologies or animus.

I.  A Note on Terminology

For the bulk of the book, Murray adopts non-standard terminology, in an effort to avoid the political and social baggage associated with common terms for racial and ethnic groups.  He refers to American whites as Europeans, American blacks as Africans, Hispanics/Latinos as Latins, and Asians as, well, Asians.  He refers to American Indians as Amerindians, though there is no detailed analysis of this group (which is very small in percentage terms).

When using the common terminology, Murray refers to Hispanics/Latinos as Latinos (while I typically use Hispanics).  The terms are used interchangeably by the Census department.

According to Murray’s data, the racial or ethnic groups that comprise 1% or more of the US population are:

These groupings total 94.2% of the population.  Other groups, ranging from Native American to Southeast Asian to various mixed race/ethnicity categories make up the remaining 5.8%.

Murray lacks data to determine precisely what a person might mean when he self-identifies as a Latino of an “Other Single Race.”  There are two possibilities, at least.  One possibility is that the person is identifying with a specific American indigenous group, such as Mayan.  Another possibility is that the person simply considers Latino to be a racial or ethnic category in itself, and such a person might be from a variety of racial or ethnic backgrounds, including pure European ancestry or mixed ancestry. 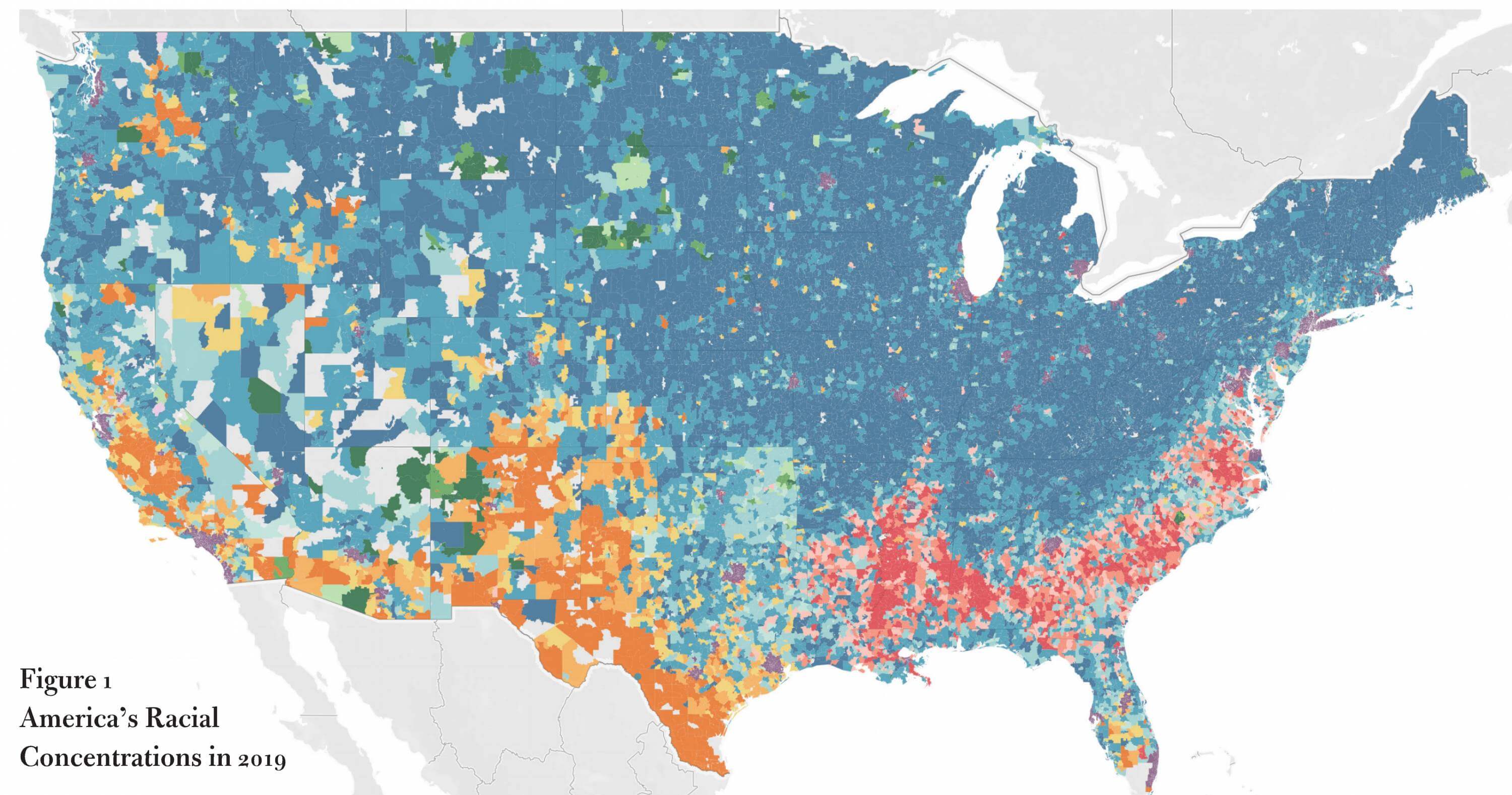 The blue portions are regions that remain very heavily European.  The red areas have a large African population (25% or more), and the yellow areas have a large Latin population (25% or more).  The purple areas, which are a bit hard to see, are the multiracial big cities.  Green represents areas with a high proportion of Amerindians (reservation areas).

Murray presents many further, interesting details, but if you want to know more, buy the book!

I do have one comment about this demographic issue, specifically about Latins.  Most Latins — two-thirds — turn out to be European.  The black proportion is tiny, and the remainder seems to be mostly Amerindian or mixed.  My suspicion is that, as time goes on, most Latins will be viewed as just another bunch of European folks (or, in common parlance, white folks).  Just like Italians, or Poles, or the Irish, or many others.

If correct, this would indicate that the majority-minority talk is bunk.

Chapter Three sets forth the facts regarding the IQ distributions of the various racial groups in America, and Chapter Five discusses the first-order effect of these differences, especially in employment.  There is a great deal of interesting information in these chapters.

On the black-white gap — what Murray calls the European-African gap — I feel rather vindicated.  I did a detailed post on this issue, in early May, using data from the NAEP (National Assessment of Educational Progress).  This is Murray’s principal data source, as well, and his methodology is essentially identical to mine.  His book does have the advantage of including a number of additional data sources, which tell the same story.

Here is the comparison of my graph of the European-African IQ gap, and Murray’s.  Note that I use IQ units, while Murray uses standard deviations, but this is just a matter of scaling (1 sd = 15 IQ points). 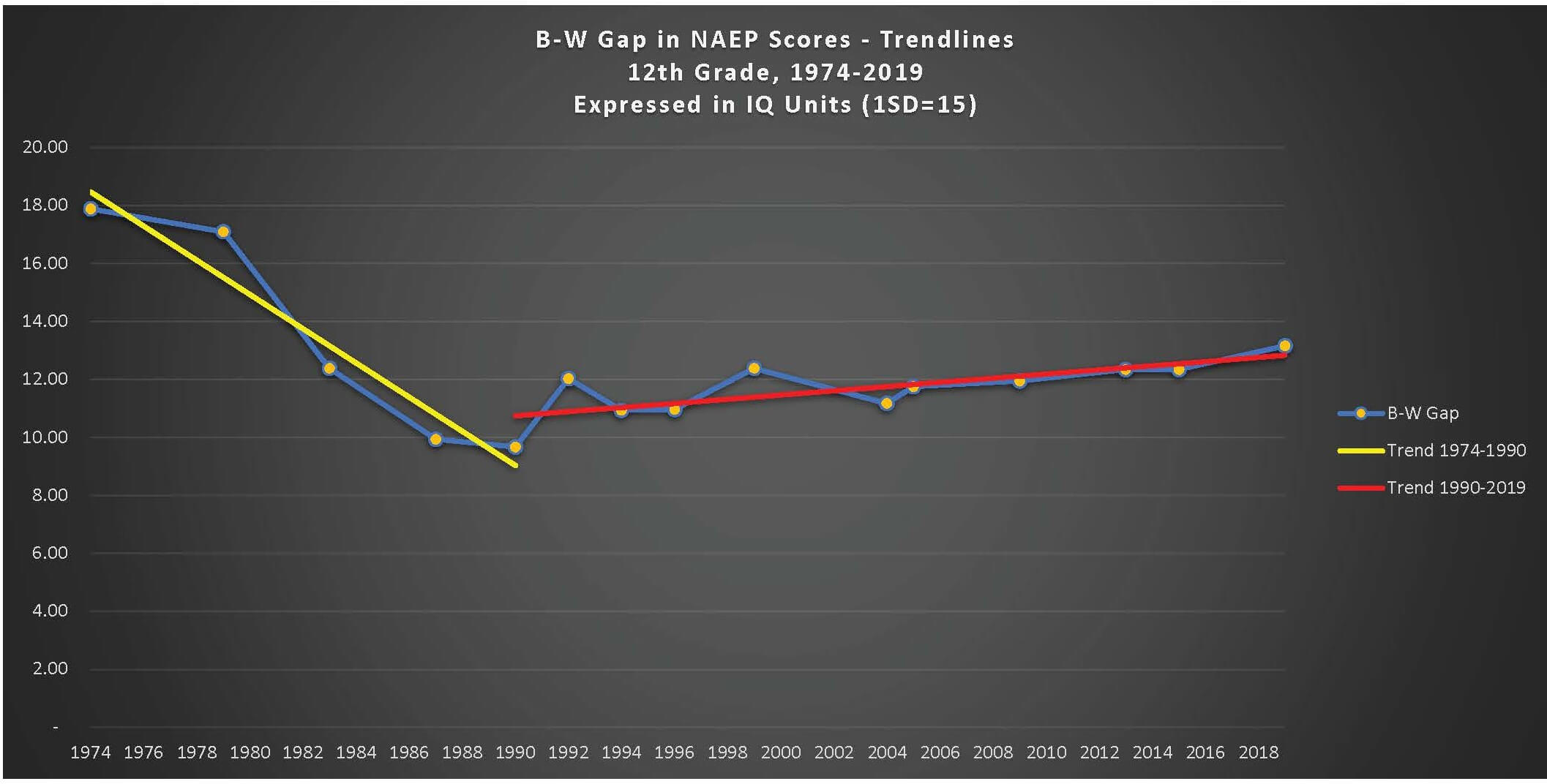 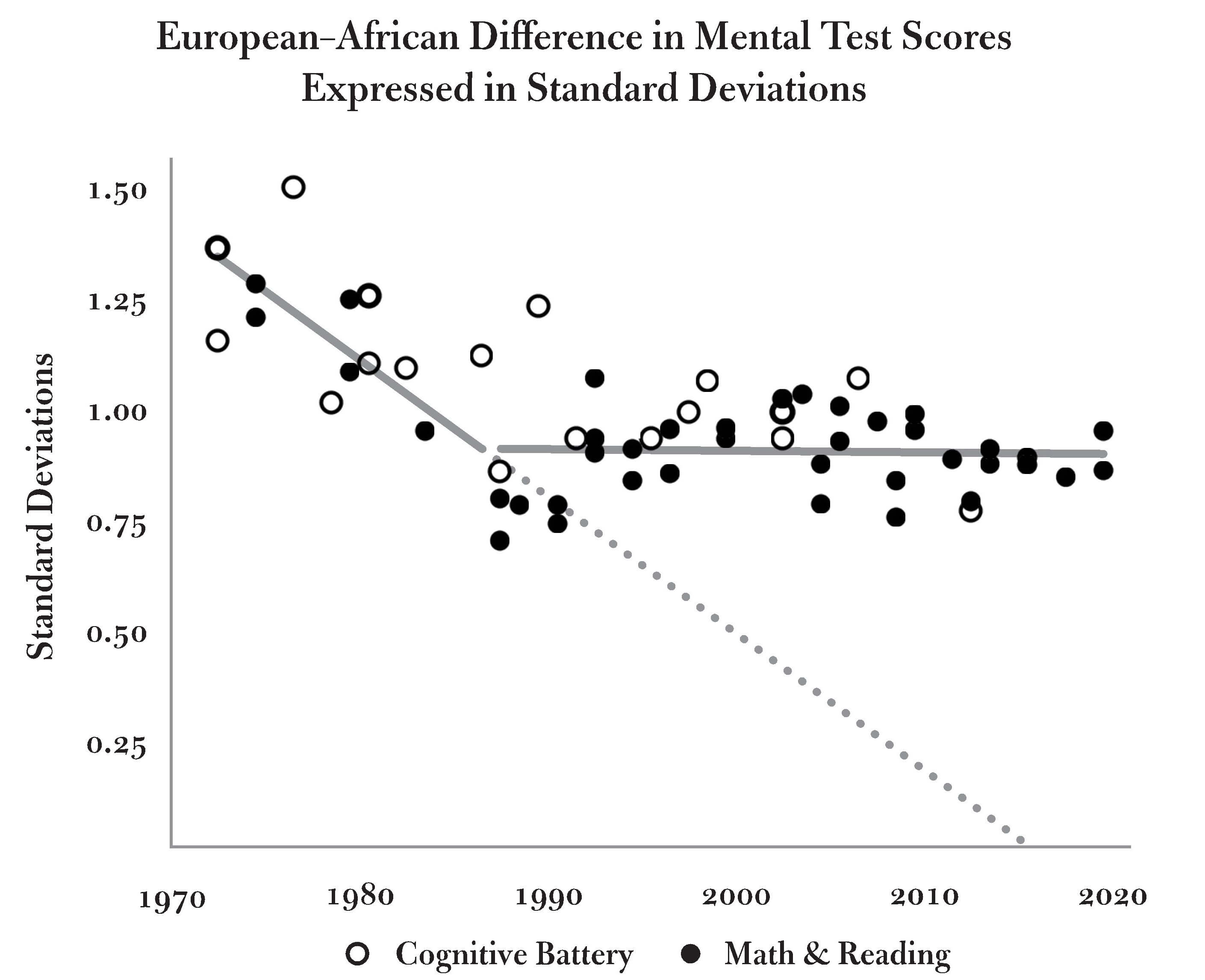 As a technical note, the open circles on Murray’s graph indicate the results of a formal IQ test, while the closed circles are estimates derived from the math and reading portions of academic achievement tests (almost all from the NAEP).  Murray has many more data points than I used, even for the achievement tests, because he included results for both the 13-year-old (or 8th grade) and the 17-year-old (or 12th grade) NAEP tests.

The similarity between my graph and Murray’s is striking.  Murray, like me, noted that the European-African IQ gap narrowed through approximately 1990, and calculated two different trend lines.  Murray used 1987 as the transition year, while I used 1990.

My post contemplated that I might follow up with a calculation of the European-Latin and European-Asian gap.  This may be unnecessary now, as Murray’s book demonstrates the facts.  Here are the other two graphs: 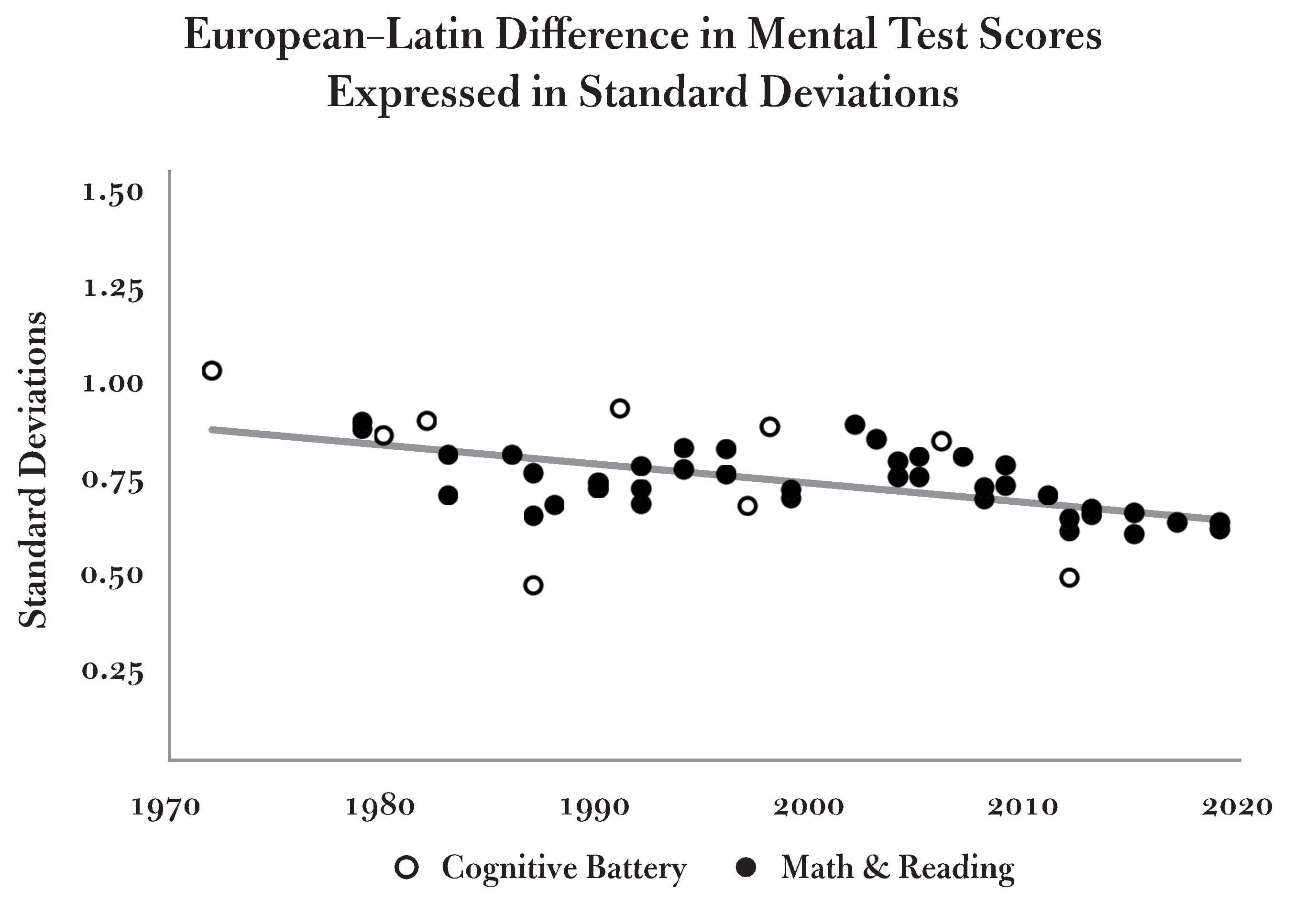 This is the graph of the European-Latin gap, which has been gradually narrowing.  Murray notes that there was a widening in the 1990s, and reports that he has not determined an explanation for this, though it may have to do with the specific demographics of different Latin immigrant groups arriving at different times. 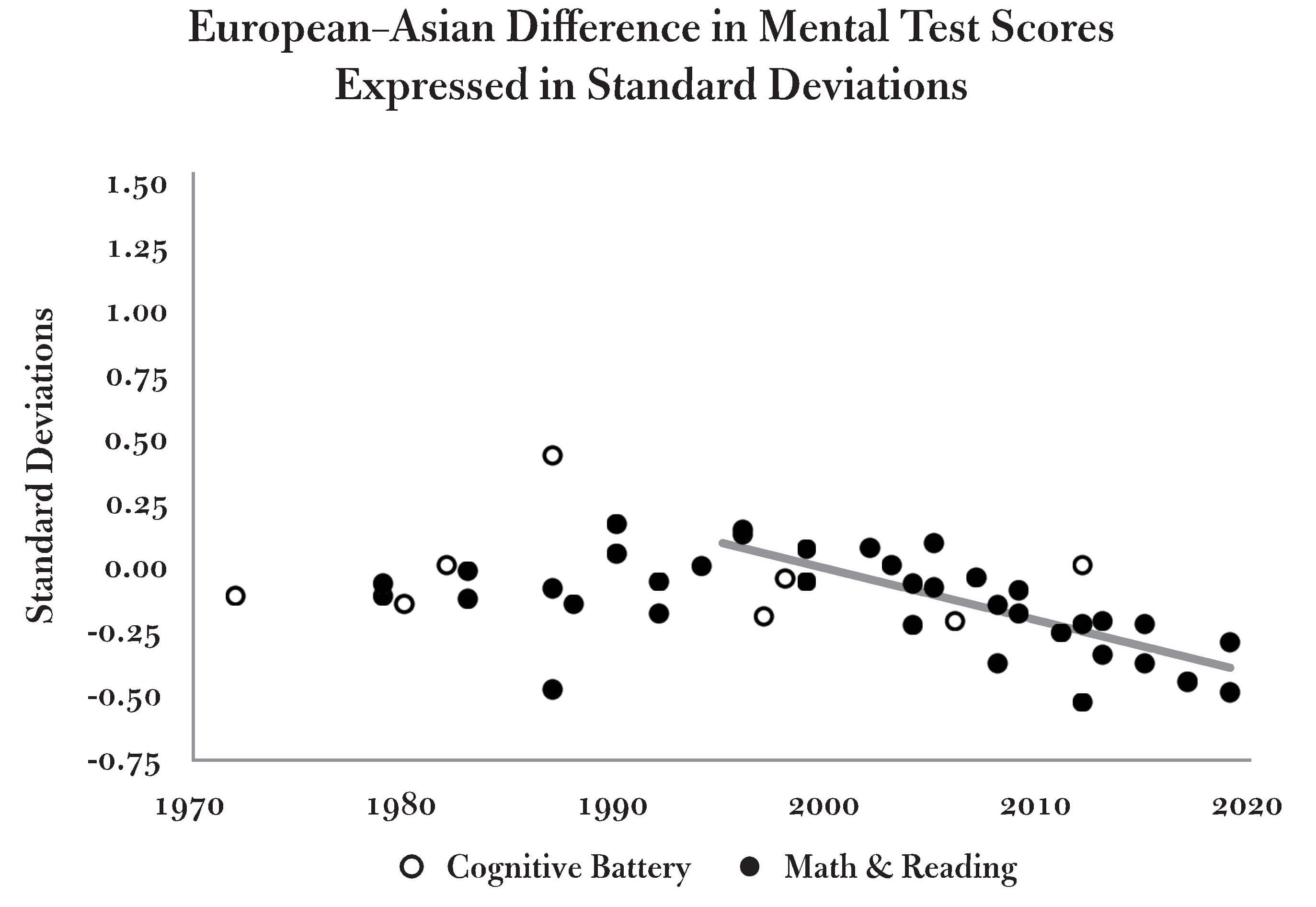 This is the graph of the European-Asian gap, which has been shifting in favor of Asians (mostly students).  Note that the “gap” is now negative, indicating that Asian IQ is higher than European IQ.  Note that the trend toward higher Asian IQ principally appears in the achievement score data (the closed circles), while there is not a consistent difference evident in the few data points involving full IQ tests (the open circles).

Murray’s Chapter 5 presents a detailed analysis of the effects of these IQ differences, especially on different professions, and notes that the gaps exist even within various occupations.  For example, among accountants, average European IQ is 111, average African IQ is 100, and average Latin IQ is 104 — a European-African IQ gap of 0.96 standard deviations and a European-Latin IQ gap of 0.60 standard deviations.  This difference exists across a wide range of occupations, even janitors.

Chapter Four sets forth the facts regarding differences in violent crime rates among the various racial groups in America, and Chapter Six discusses the first-order effect of these differences.

For violent crime, the mean African/European Ratio for the 13 cities in Murray’s data set was 9.0.  The mean Latin/European Ratio was 2.4 (though this was based on data for only 9 cities).

Crime rates were so low among Asians that Murray didn’t specifically report them, explaining that they led to an almost comically huge ratio, even when compared to Europeans (meaning that even the European crime rates were very high compared to Asians).

Chapter Six, which addresses the first-order effect of these differences in violent crime rates, focuses on the negative effect of such crime on business and economic opportunity in minority neighborhoods.  For example, many businesses have disincentives to locate in minority areas, as they are placed in a catch-22 situation.  Due to higher crime, they have a higher cost of doing business.  If they nevertheless decide to locate in such neighborhoods, they can either charge the same prices as elsewhere (and therefore earn less profit or even operate at a loss) or charge higher prices (and be accused of racism).

Murray also notes that it is rational, and proper, for police to adopt different tactics and behavior when working in high-crime areas.  These areas tend to be disproportionately African and Latin (especially Latin).

V.  What Murray’s Book Does Not Address

Murray’s book carefully avoids expressing any opinion, or even presenting any data, regarding the cause of the racial differences in cognitive ability and violent crime.  His argument is that, at least in the short run, the cause does not matter for purposes of many policy issues.

For example, even if we found a way to narrow the European-African IQ gap — say by improved education or strengthening families — such a change would take a very long time to have any effect.  Such changes would not change the cognitive demographics of the current American workforce.

Murray’s Chapter Seven is principally a warning against white identity politics.  His general tone is not anti-European.  Rather, it is concerned that with the growth of identify politics demands by Africans and Latins, the Europeans may adopt the same tactic, quite understandably.  Murray thinks that this would be catastrophic for America, and will destroy what he has long called the “American Experiment.”

Maybe Murray previously meant that American ideals were only mostly dead.  Or maybe he means something different by “American Experiment” than the term that he used previously, “American Project.”

Even if Leftists and centrists accept the facts presented by Murray about the existing, large differences in these two areas, I do not think that they will respond in a productive way.  To the contrary.  I think that Murray’s data will throw more fuel on the fire, sadly.

Because I think that we know what many people will say.  They will say that the European-African IQ gap is proof of racism.  Ditto for the extraordinarily high crime rates among Africans.  They will simply say that this is more proof of white racism.

As usual, the narrative will be that it’s all Whitey’s fault.

Despite this reservation, I do highly recommend the book.  If you’d like to watch a good summary of this latest work, I recommend two interviews available on YouTube:

I hope, and expect, that Peter Robinson has an Uncommon Knowledge episode in the works on Murray’s new book.