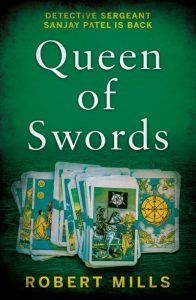 The British police procedural is one of the most popular forms of detective fiction. The twentieth century brought Colin Dexter’s Inspector Morse and P. D. James’s Adam Dagliesh. There are many others, including some set in the nineteenth century.

“Queen of Swords,” by Robert Mills, brings the genre into the twenty-first century.

Senior nurse Jenny Butcher is found strangled in her London flat. Detective Inspector Sanjay Patel, a British-born Indian is the case’s first investigator. He is assigned as deputy to Chief Inspector Tracy Taylor, and an important part of the investigation.

It soon becomes apparent there many possible suspects. Butcher is an unattractive character. She is promiscuous and self-centered, using men as sex toys. When men became serious about her she dumps them. There is no shortage of embittered ex-lovers as well as wives furious at having marriages ruined by Butcher. Even Butcher’s daughter and sister are alienated from her.

Patel is a newly-promoted detective inspector, and considered a rising star. He is being undercut by a jealous rival, a detective inspector bumped from the Major Investigation Team in favor of Patel. The other officer was replaced because of his own shortcomings, but blames his replacement instead of his own bad behavior. He manipulates events to get Patel suspended, and replace Patel in the investigation.

Patel was going slowly. The many clues and many suspects concern him. Patel’s rival wants a quick solution, before Patel returns. To get a quick resolution, he latches on to one suspect to the exclusion of others. Patel suspects the authorities, under pressure to solve the case quickly, may be focusing on the wrong suspect.

Adding to Patel’s worries is his family. His parents, old-school immigrants to Britain and successful business owners, disapprove of Patel abandoning medical school to become a police officer. They also disapprove of his marriage – for love – to a white, Christian Englishwoman.

Patel perseveres professionally and personally. He untangles a set of obscure clues to come to a final, and correct, conclusion.

“Queen of Swords” is a classic police procedural updated to the twenty-first century. Patel is someone who could not have been a policeman in Morse’s day, proves a kindred spirit to Morse or Dagliesh. New tools are available including DNA matching and security cameras. The ultimate solution is discovered through correct interpretation of the clues and patient procedural police work.  Mills leave you looking forward to Patel’s next adventure.