This weekend, I traveled to the city of Findlay, Ohio, to see an old friend. I expected to find beautiful buildings and good conversation, and I did. What I didn’t expect to find was a corporo-civic woke propaganda campaign being waged on its streets. 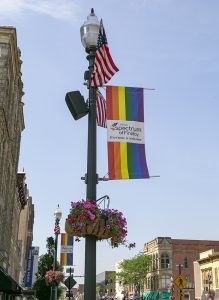 First, I wandered around the older residential neighborhoods and saw a few of the usual yard signs and rainbow flags. This is to be expected. But downtown surprised me. Rainbow banners festooned the lamp posts along Main Street, and a rainbow blob (intended to be a rainbow Ohio, I gather) had been painted at the center of the main intersection, in front of the county courthouse. A large flag mounted to a coffee shop read “HATE HAS NO HOME HERE,” and a bulletin board at the local deli was covered with posters advertising a marijuana dispensary and various LGBTQWERTY clubs and activities. Two activists of some kind roamed the streets in their Pride Month shirts, handing out business cards, while a local eccentric, also clad in rainbow attire, muttered to himself and occasionally yelled indecipherable words at the joggers and dog-walkers going to and fro.

Findlay, set amid northwestern Ohio’s flat and fertile farmland, has a population of just over 40,000 — not too shabby by any reasonable standard, though a flyspeck by the standard of the coastal elite. Findlay owes its prominence to the oil and gas industry, and especially Marathon, which maintains its corporate headquarters in the city’s downtown. The place navigated the post-industrial transition well enough, and its economy is at least functional. Findlay is like most smaller Midwestern cities, and on paper, it has a reasonably conservative culture. In 2020, the county gave Trump 68 percent of its vote, and Trump likewise won all of Findlay’s urban precincts (narrowly, in a few cases). The city does have a university, but it is small and Christian, and therefore not enough to pollute the water. 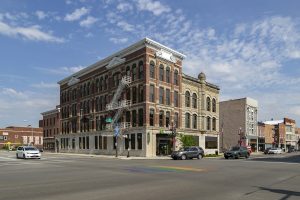 Yet wokeness is omnipresent in Findlay, just as it is omnipresent everywhere. This is because Findlay, like all places, has an elite, and its elite aspires to cosmopolitan greatness. Businesses in and around the city, large and small, pump money into Spectrum of Findlay, the slick non-profit organization responsible for sponsoring the banners along Main Street. A Toledo news station just profiled Findlay’s burgeoning drag scene. Findlay’s mayor — a young, female Republican elected in 2019 — seems to have a pet interest in sex and gender politics, having signed a Pride Month proclamation and promoted the related festivities on her Twitter feed. Meanwhile, the Findlay City School District (80 percent white) has decided to build a diversity bureaucracy and “[i]mplement quality and effective diversity programming and training for all FCS staff and students.” Its website’s “Equity, Diversity & Belonging” page includes links to all the usual nonsense, as well as a TED lecture titled “No Such Thing as ‘Not Racist.'” And last summer, Findlay resident Amanda McClellan self-flagellated before the city council, decrying her own “racial bias” and begging the council to “step up, speak out, [and] learn to unlearn history.” (Findlay’s own police knelt during protests last summer.)

Given all this, there is no reason to believe that Findlay — or any other city in Ohio, America, or the west — will be able to maintain anything remotely resembling a Christian or traditional culture for more than a decade or two. The children of Findlay’s Trump voters and Biden voters alike will declare themselves polyamorous, pansexual, and transgender, dye their hair blue and magenta, and drug themselves into oblivion, just as everyone else has. Findlay’s professional class, like the professional class in general, offers nothing except therapeutic platitudes and corporate babble — all part of an ethic defined by a pathological fear of giving offense. Because when social cohesion breaks down, and all cease to agree on the terms of the social contract, the easiest thing to do is to believe nothing.

A society that believes nothing cannot survive for long.