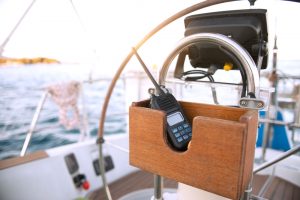 You probably do not imagine yourself making a Mayday or SOS call, but it is good to know how to do so in an emergency. In an amazing act of government reasonableness, anyone can call on any band in a real, life- or limb-threatening emergency. I could use my handy-talkie on a military or police band, or the dedicated marine radio band regardless of my license. If you are asked to call in a distress signal by a pilot or ship captain in an emergency, you are in the clear.

Before you start calling on the radio, make sure any emergency distress beacons are activated. Ships should have an EPIRB available – never go on open water without one. Planes can set their transponder into distress mode. If you are going into the wilderness, it is probably a good idea to carry a personal distress beacon and familiarize yourself with other distress signals.

The first thing to understand is that radios are not like phones. You need to select the frequency/channel. For marine radio, you want channel 16 (156.8 MHz), for an airplane you want 121.5 MHz. If you are on a distress channel, do not talk over another person. Once you get a hold of someone, they will likely ask you to change to another channel if you can, just in case you are not the only one having a really bad day.

Now, you need to follow protocol. This is similar to the information to relay on a 911 call: Who, What, and Where.

Now wait a minute and listen for a response. Do not hold down the transmit switch. You can repeat the message if you do not receive a response in a minute or two.

Hopefully, this is news you don’t end up using. However, experience taught me that it is better to be prepared than not.