I usually associate puckish or somewhat risqué headlines with organs such as the Daily Mirror in the UK, and the New York Post in the United States.  Newspapers that no-one in my family would have been caught dead reading, at least in public.  (Excuse me for a moment; just clearing my Internet cache, LOL….)

So imagine my surprise this morning, when The Telegraph, one of Britain’s staid old newspaper ladies and the only one my family would read (after the servants had ironed it, of course), emblazoned the following headline across its webpage:

Rebel baron undressed the Cerne Abbas Giant to get a rise out of Oliver Cromwell.

Well, look at that. This respected former British newspaper descended into the realm of lewd Internet clickbait.

Some background:  The Cerne Abbas Giant is one of those chalk hill figures that dot the British countryside, many of whose origins and original purpose are still cloaked in mystery.  Its first recorded mention occurs at the turn of the seventeenth century, and its age has long been unknown, although it’s been generally accepted that he’s an ancient fertility symbol (for reasons which will be revealed in a moment).  However, modern science does not love a mystery, and a relatively new technique in soil and mineral dating (this particular one called “optically stimulated luminescence (hmm, there’s another joke hiding in there somewhere, methinks)),” together with 3D laser scanning (LiDar) has revealed that he’s somewhere between twelve and fourteen-hundred years old, and that he was probably decently clad when he was first etched into the Dorset hillside next to a community of devout Cerne Abbey monks.  (The abbey was founded in 987 by Æthelmær the Stout. Lord.  I do love me a nice historical rabbit-hole to get lost in.)  There’s speculation that the Giant may have been a representation of the pagan Saxon deity Helith or Heil, but the figure’s original purpose is still unknown.)

Today, though, the 180-foot high Cerne Abbas Giant (colloquially known as “The Rude Man,”) looks like this: 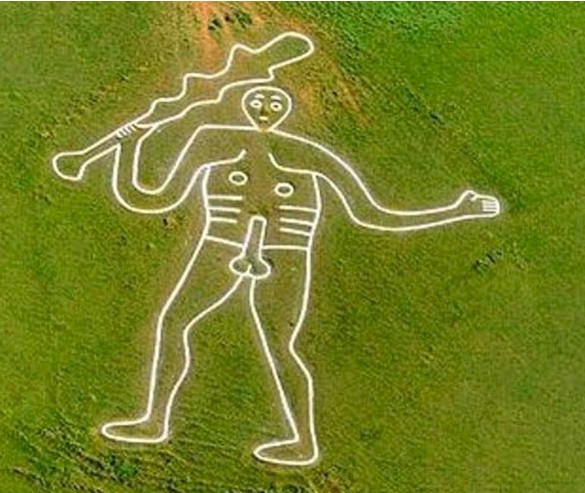 So perhaps you can see why he’s been associated with the idea of fertility and elemental “maleness” since Victorian times, and why he’s become something of a shrine for childless women, who’d erect(!) a maypole(!!) around which they would dance to increase their chances of conceiving.  Rituals (I’ll leave you to speculate on which sort) have been conducted on his midsection by newlywed couples, and women who sleep near him are said to be blessed with increased fertility.

Lest you scoff, I’ll just point out that, apparently, all that works.  As of July 2010, the ladies of North Dorset, with an average of three children each, had the highest reproductive rates in Britain.  Go figure.

But their faith in their hero is about to be severely tested.

The modern dating techniques indicate that the Giant’s club, and his…umm…appendage, date from much later that the rest of him–in fact, from the time of the English Civil War.

In the mid-seventeenth-century, that portion of the Dorsetshire hillside and the Cerne Abbas Giant himself, were owned by Denzil, 1st Baron Holles, a British Parliamentarian who favored treating with the King rather than armed revolt, and who over the course of the war and its aftermath, became Oliver Cromwell’s bitter foe.  During Cromwell’s protectorate, Holles was forced into exile, and there are contemporaneous accounts of the Giant being carved into the hillside at his instigation and as a protest.

Those reports are now known to be false.  But it does appear that the Giant was altered in two important ways at this time, ways which are now thought to be that protest against Cromwell, one which took the form of adding a club to indicate Cromwell’s cruelty and despotism, and the other, a phallus to mock his Puritanism.

So that’s a mystery solved.  However, the Giant’s original purpose, like that of a few of the many other chalk hill figures in Britain, remains one.

And may it ever remain so.  Some things are best left to the imagination.