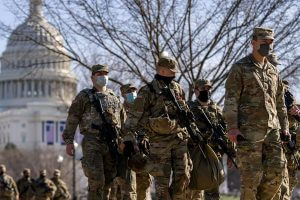 My daughter is active-duty Air Force and she is currently deployed overseas. She works in a direct mission career field which requires a top-secret clearance. Her work schedule on deployment is much more intense than it is when she is stateside. She works with all sorts of people: ages 19-50, all races, all genders, officers, NCOs, and enlisted. Her field is highly technical and competencies are more important in some aspects than how many stripes you may have. Her unit was tapped for the required “Extremist Briefing” recently and this is her report.

There was about 90 personnel in attendance. The briefing was two hours in length, despite their tight mission schedule. The briefing room required masks and chairs were positioned two feet apart. The briefing started with a video on the big screen with speeches from the SecDef, a four-star, the Chief MstSgt of the USAF, Commander of Air Combat Command, and on down the command structure until the video featured my daughter’s immediate command. She said that the way it drilled down to a face she knows made it feel very personal. The talking heads kept using the term “extremists” and “extremism” but the terms were not specifically defined, and that the terms were used very generally. (Kind of a “we all know it when we see it” kind of way). She said the video was creepy and made her feel uncomfortable. As a “Hunger Games” book fan in middle school, she said that she felt like it was a scene out of a Hunger Games book where the “Capital District” was telling everyone in other districts what the reality was, but that the ones out of touch with reality were on the screen.

After the video and some PowerPoint slides (can you have a briefing in the military without PP slides?), my daughter said they were broken up into smaller groups and a “facilitator” (another military person) then asked questions of the group members such as “Tell me about a time in your military career that you saw or experienced extremism.” The groups were told that the facilitators were required to write down their responses and would be sending them back into the SecDef. One group member tried to pin down the facilitator about what did they mean by “extremism?” (Still no clear definition.) One group member, a black airman, stated that he may have experienced a couple of jerks during his AF career who were racist, but when were they going to be asked about the thousand other incidents of his colleagues going out of their way to support him professionally and personally? Another group member wondered why they were not talking about extremism in the context of Antifa and Portland. Another black female airman said that the AF was a melting pot and, although she came from an all-black neighborhood, she had met and worked with great people of all walks of life. No one in the group offered any examples of “extremism” despite the lack of definition.

At the end of it, my daughter said that she had previously ignored all the talk of this and focused on her job and her life. She said this briefing crystalized to her that, in her words, s&*t just got real. She said that she felt like the term “extremist” was being used as a euphemism for “conservative” or “libertarian” but they couldn’t come right out and say that. She is not a big user of social media but she said that she “likes” and “follows” several conservative voices so, even though she doesn’t say anything herself, she’s worried about her “follows” being used against her. My daughter said that no one had ever had any issues with “extremism” that she is aware of, but she said that her job/unit is very mission-centric and she wondered about other areas of the service that were not so primary-mission focused such as finance/dining services/medical which would harbor disgruntled airman with a laundry list of extremism examples to share. No doubt we will later see a “report” issued by SecDef about all the problems with extremism as reported from these active-duty wide briefings since they were taking all these answers down.

My daughter’s conclusion is that it was very poorly focused, creepy, and a waste of time. But yet, illuminating as to the direction of the service branches. She said that she will be even more mindful of herself in her workplace and even out of the workplace due to this.