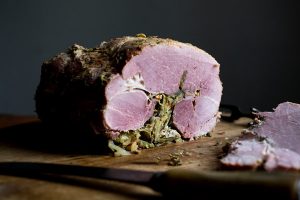 When I was in my late teens, I found an old purse that had belonged to my grandmother and in it was a shopping list. Among other items, she had written “spigety” and I showed it to my mother and had a little chuckle over how it was spelled. My mom was also amused, but then she smiled at me and said, “And you know–she did not mean “spaghetti”–she would have been buying macaroni noodles for mac and cheese. My mom would have never made spaghetti.”

Well, that was a surprise to me, because we had Italian spaghetti at our dinner table regularly. But, when my mother was a child, she grew up in a home where her parents were first-generation Americans. Her father’s parents had emigrated from Switzerland, and her mother’s dad was Swedish and the mom was born and raised in Scotland. There was no spaghetti served in those homes. Both families were dairy farmers, so cheese was a major food group.

I began to think about my food journey for this post and I’m so lucky that I had the opportunity to broaden my culinary horizons throughout my adult life. Don’t get me wrong: my mom was a phenomenal cook! She had Skills. She created three meals a day for our family (which ultimately numbered 10) and it was a rare dinner in the summer (farmer dinner: mid-day) that didn’t have us setting another place for a guest/guests who just “happened” to drop by right then. Every meal was balanced: nutritionally, colors, textures, flavors. She was a kitchen genius. Practically all of it made from scratch. In the winter we ate from the bounteous canned, bottled, frozen storehouse in our cellar that she had spent all summer packing away.

When we married, my husband was in the Navy and we got to live in San Diego. My husband and I were both Wyoming kids…his family ranched, mine had a dairy farm. We found ourselves in a whole new world. I had–literally–not eaten Mexican food until I moved down there. It’s a good place to be introduced to the world of tortillas, chilies, and all the amazing things you can do with them. I had experienced Asian cuisine because once or twice after high school, I’d gone with a friend to a Chinese restaurant there in our college town. In California, the Peking Café became our special occasion destination.

The real life change is that I began to cook in a whole new way. There were a couple of reasons for this.

#1: I discovered how much food cost! I’d never been aware of the cost of milk, cheese, eggs, beef, poultry, pork, etc. Those foods were produced on our farm, and appeared in our fridge and on our table due to the labor of our family. When I went to the Navy commissary to buy groceries, I admit I was astonished at the cost of all those foods. I had to relearn how to cook. My helpful neighbors taught me the art of delicious tacos, enchiladas, and rice and beans. I found I could take a very small serving of meat and get great flavors anyway.

#2: I found a wonderful vegetarian cookbook and sometimes I’d put in a little chicken or pork, and sometimes we’d just eat the non-meat version. I learned how easy it was to cook in a wok and how great Chinese food was, and how tasty it was with just a bit of that pricey flavor from the pig or cow or chicken. I was also now living where I could garden all year round, so fresh vegetables were always available.

Then, we moved again! This time we went back north. Mr. CowGirl was a civilian again, and he took a job at an Air Force base that enabled us to live hundreds of miles closer to our extended families. We could visit the grandparents more often, and that was a good time of our lives to be in that spot. We also discovered Basque food! There is a sausage flavor, and some spices and crazy delicious stew that we ate at a 4-H potluck. We found a restaurant in Boise. We had discovered a new world of culinary splendor I had never known before. Yes…I bought a cookbook before we left that area!

Our next adventure in Foods I Wish I’d Met Sooner occurred when we headed to a new job back in Southern California. At church, we made the acquaintance of a family whose teens befriended ours, and their mom and I just hit it off. Sushila Prasad was born and raised in Fiji, but was of Indian descent, and when she was a teenager, her family emigrated to America. Her arranged marriage didn’t work out, but she was a hard working woman who appreciated how I helped her with her teens (and here I was thanking them for welcoming us…) because she had a shift at the store where she worked that kept her away from home in the evenings. She insisted on inviting our whole family to her home one night for dinner to express her gratefulness, and that is when I discovered the astonishing flavors of Southeast Asia. Where was this food my whole life?? How had I gotten old enough to be the mother of teenagers and not know about curry, tikka masala, chutney, naan?? I was amazed! Yet again, a whole new world! She ground her own spice mix that she’d learned from her grandma. She’d grown up as a vegetarian, but she cooked meat dishes as well. The whole experience changed my life.

Inevitably, we had to move to another location. It was the hazard of being a Field Service Engineer. This time we landed in Southern Maryland–oyster boats, Amish farmers, lots of trees, blue crabs, and a Naval Air Station. And…stuffed ham.

Unless you’ve eaten it, you won’t understand. I’ll just let you go to the link and read all about it because I don’t have room here. And after you read about it, if you don’t find a reason to travel to Leonardtown and have a meal of stuffed ham and fried oysters then your life will never be complete. Another thing about Southern Maryland food is that when I discovered how simple it was to catch blue crab, and, although picking the meat from them was a lot of work, it was worth it for me to have “free” crab cakes all winter to go to the trouble of being a crabber.

So, now I live in Las Vegas. Not only is it “Sin City,” it is a dining mecca. You can find among the restaurants here one that will serve just about anything you can imagine! I don’t know what new tastes are out there for my tongue to discover, but I am always eager to find them! So if you have a regional delicacy or standard where you live that I’d like to try, let me know in the comments. I can also recommend a restaurant in Boise ID, Washington D.C., Malibu CA, or Solomon’s Island MD for you!