Despite the concerted efforts to place the stain on others two days earlier, it will be Friday, January 8, 2021 that history should rightfully record as the moment “The End” went hot.

Consider that the very strained Union now stands at the edge of, not being governed, but being ruled by the completely corrupt and demagogic troika of Biden, Schumer, and Pelosi in the elected seats of power, a joke of a Supreme Court, a compliant and reliably incurious “watchdog” media, and the big tech overlords who, if not wholly “owned” by hostile foreign interests, are at least overtly anti-American to the core.

We didn’t get here by accident and there is clearly an agenda at work. I suspect this is not going to end well. 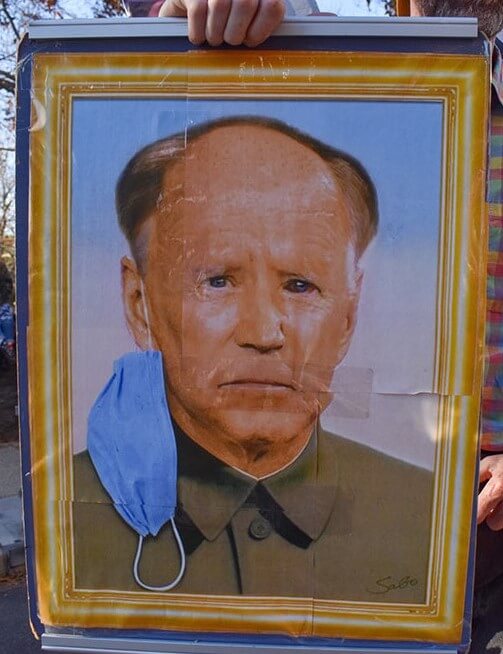 Over the top? Conspiratorial? Fear mongering? Well, both signals and noise late this Friday evening have not been promising:

[Glenn Greenwald]: Biden has said he plans to make a priority of passing a law against domestic terrorism … [to] fight against ideologically inspired violent extremists and increasing funding to combat them.

[Glenn Greenwald]: Liberals who are behind the Biden/Harris plan to initiate this new War on Terror, this time with a primary domestic focus, won’t need to study what neocons did with the first War on Terror to learn those old tactics against critics. Neocons are their full allies in all of this.

[James Woods]: Twitter, the “public forum” for free speech, has deleted 15,000 followers from my account in the last few hours. There is no point engaging in a national conversation on a “forum” that is in actual fact a propaganda organ. God bless America.

(Much of this information filtered in today in Ricochet comments…I apologize for not digging those up for a proper “hat tip.” These links were much easier to find.)

There is much in all three of those links to scare you. Earlier: Apple Has Threatened To Ban Parler From The App Store.

Very clearly an orchestrated attempt not simply to silence one man, but to silence millions of people in one fell swoop. … They think you’re the enemy.

And this charge from the still-sitting President:

“As I have been saying for a long time, Twitter has gone further and further in banning free speech, and tonight, Twitter employees have coordinated with the Democrats and the Radical Left in removing my account from their platform, to silence me — and YOU, the 75,000,000 great patriots who voted for me,” Trump wrote. “Twitter may be a private company, but without the government’s gift of Section 230 they would not exist for long. I predicted this would happen. …”

And I will add in the attacks on elected Republican officials:

HERE COMES PERSECUTION: The Left is moving into position to suppress all dissident voices.

(Note: Some real Grade A demagoguery if you follow that link to the source.)

…and Clarence Thomas (I’m sure Fraudulent Joe remembers him):

The Left Is Now Targeting Clarence Thomas for Destruction

So much is coming so fast. None of it good.

Finally, I do not believe this would be done lightly: Of course, this chaos will also serve to memory hole the real story of the stolen election of 2020 and ensure nothing is done to disrupt their finely tuned controls on the system:

Mark Levin: January 6 is the day we learn whether our Constitution will hold and whether congressional Republicans care

… After the 2016 election, the Democrat Party, its various surrogate groups, and eventually the Biden campaign unleashed hundreds of lawsuits and an unrelenting lobbying campaign in key states that had previously been won by President Trump, taking unconstitutional measures intended to stop President Trump from winning these states in the 2020 election, thereby literally undoing this critical constitutional provision. What had been carefully crafted at the Constitutional Convention and clearly spelled out in the Constitution was the main obstacle to defeating President Trump and winning virtually all future presidential elections. The problem for the Democrats was that in several of these battleground states, the Republicans controlled the legislatures, while the Democrats controlled state executive offices. The Constitution was not on their side. Therefore, they used the two branches of government that were to have no role in directing the appointment of electors to eviscerate the role of the Republican legislatures.

In Pennsylvania, considered the battleground of the battleground states, the Democrat governor, attorney general, and secretary of state made and enforced multiple changes to the state’s voting procedures, all of which were intended to assist the Democrats and Biden. The Pennsylvania Supreme Court, whose seven justices are elected, has a 5-2 Democrat majority. (In 2018, there was a big push by the Democrat Party to fill three of the seats with Democrats, and it succeeded.) Just months before the general election, that court rewrote the state election laws to eliminate signature requirements or signature matching, eliminate postal markings that were intended to ensure votes were timely, and extended the counting of mail-in ballots to Friday at 5:00 p.m. (state law had a hard date and time — election day on Tuesday, which ended at 8:00 p.m. ET), thereby fundamentally altering Pennsylvania’s election laws and nullifying the federal constitutional role of the Republican legislature.

In Michigan, among other things, the Democrat secretary of state unilaterally changed the state’s election laws with respect to absentee ballot applications and signature verification. Indeed, she sent unsolicited absentee ballot applications by mail prior to the primary and general elections. State law required would-be voters to request such ballots. She intentionally circumvented the Republican state legislature and violated the federal Constitution by issuing over 7 million unsolicited ballots. Furthermore, a court of claims judge, appointed by a Democrat, ordered clerks to accept ballots postmarked by Nov. 2 and received within 14 days of the election, the deadline for results to be certified. The ballots would be counted as provisional ballots. The state legislature had no role in these changes.

In Wisconsin, the Elections Commission and local Democrat officials in the state’s largest cities, including Milwaukee and Madison, changed the state’s election laws. Among other things, they placed hundreds of unmanned drop boxes in strategic locations in direct violation of state law. Not surprisingly, the locations were intended to be most convenient to Democrat voters. In addition, they told would-be voters how to avoid security measures like signature verification and photo ID requirements. These bureaucrats and local officials bypassed the Republican legislature in altering state election procedures.

In Georgia, the secretary of state is a Republican. Regardless, as explained in the Texas lawsuit brought against Georgia and the three other states mentioned above, “on March 6, 2020, in Democratic Party of Georgia v. Raffensperger, Georgia’s Secretary of State entered a Compromise Settlement Agreement and Release with the Democratic Party of Georgia to materially change the statutory requirements for reviewing signatures on absentee ballot envelopes to confirm the voter’s identity by making it far more difficult to challenge defective signatures beyond the 22 express mandatory procedures set forth at GA. CODE § 21-2-386(a)(1)(B). 71. Among other things, before a ballot could be rejected, the Settlement required a registrar who found a defective signature to now seek a review by two other registrars, and only if a majority of the registrars agreed that the signature was defective could the ballot be rejected but not before all three registrars’ names were written on the ballot envelope along with the reason for the rejection. These cumbersome procedures are in direct conflict with Georgia’s statutory requirements, as is the Settlement’s requirement that notice be provided by telephone (i.e., not in writing) if a telephone number is available. Finally, the Settlement purports to require State election officials to consider issuing guidance and training materials drafted by an expert retained by the Democratic Party of Georgia.” Georgia’s Republican legislature had no role in these electoral changes resulting from consent decree.

Consequently, in each of these four battleground states — and there were others — whether through executive fiats or litigation, key, if not core, aspects of state election laws were fundamentally altered in contravention of the explicit power granted to the state legislatures and, therefore, in violation of the federal Constitution and the process set forth for directing the selection of electors. And this is before we even get to the issue of voter fraud. That said, in many instances, ballots that would have been rejected or, if counted, evidence of fraud, were now said to be legal — not by state legislatures but by those who unilaterally changed the election laws. …

Go read the whole thing. (Better yet, print a hard copy for safekeeping.)