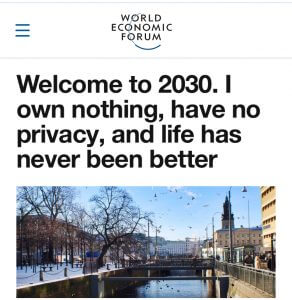 This article was penned by a member of the Danish Parliament to promote discussion about just where we are headed.

To some, it’s a utopian goal … the desired endpoint of our current big tech, big government, Marxist cooperative. To others, it’s a totalitarian hell to be avoided at all costs. But it was published by the World Economic Forum, proponents of the “Great Reset.”

Is this where they really think we could end up? It seems amazingly economically naive for something put out by an economics organization. Free clean energy? Free telecommunications? Free … everything? Without some analog to the Philosopher’s Stone, scarcity will be with us always. And with it, nothing is free. Some method must exist to ration scarce goods. Prices, determined by the free choices of free people, seem to be the best way we know to do this. But it’s not the only way. All the others depend on varying degrees of authoritarian fiat. Surely the WEF knows this. So why pretend that there is a “free stuff” possible future? They certainly seem to know there is a downside to the “free stuff” future…

Once in a while, I get annoyed about the fact that I have no real privacy. Nowhere I can go and not be registered. I know that, somewhere, everything I do, think and dream of is recorded. I just hope that nobody will use it against me.

The downside is very real. But the “free stuff” future is a physical impossibility. Yet they dangle it out there as if it were a real choice. It would seem to be an attempt to get the gullible to trade their liberty for a chimera that can’t be delivered. Fortunately for them, the ranks of the gullible are large and growing. Unfortunate for us.