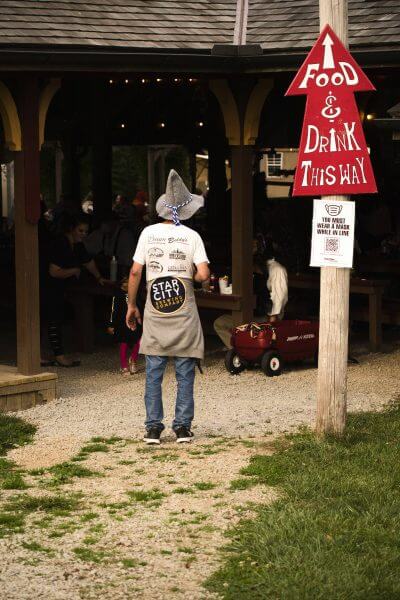 A RenFair captured in a single photo

This year it was like a ghost town. Tickets were strictly limited and purchased in advance. Half the grounds were roped off and closed, and among what was open there were numerous vacant stalls under the mock towers. But it all felt like a family reunion anyway; I recognized nobody in particular but they were all familiar anyway. The festival had been canceled back at the beginning of August. Then abruptly, near the end of August, they quietly posted on Facebook and elsewhere a partial reversal: for three Saturdays only, on a presale basis, they would open. The tickets sold out in days and the owners added a fourth Saturday. That sold out in 48 hours. We were among the lucky ones, doubly so since the day we got fell the day after our release from our family’s month-long quarantine stemming my Daughter #2’s COVID infection. For us, it was a celebration. 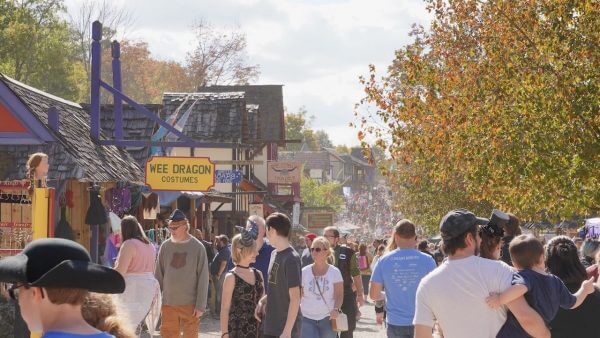 A crowded market street in 2019 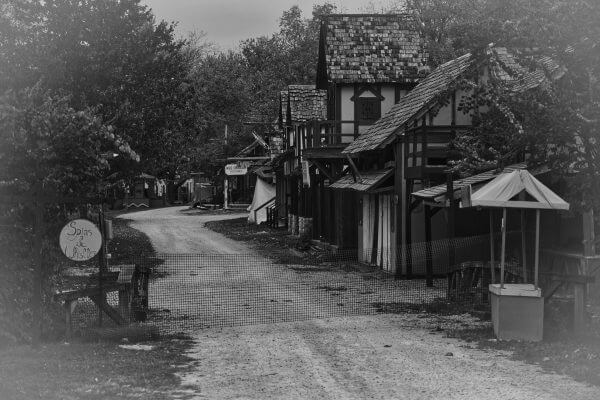 Though the grounds are permanent, the fair itself only runs on weekends in September and October. Thousands of people show up having donned costumes ranging from barbarian-ish to Roman, Medieval, Restoration, Georgian, Victorian, Steam-punk, Dungeons and Dragons, Tolkien, Wiccan, or whatever they found in the closet (no joke: I saw a rather rotund guy on year in flip flops and a ratty bathrobe, with a cheap plastic “samurai” sword tucked in his belt – to be fair it was a very warm day, but I did not want to have that image burned into my retinas). It’s all cosplay, with all the good and bad you typically find with that. I saw more plague masks this year than last, for obvious reasons (and would have purchased one there too, but the good ones were expensive!), but they’re always about. Of course, masks of all sorts were abundant this year, and clever cosplayers found ways to obey the letter of the law while keeping within the spirit of the festival. 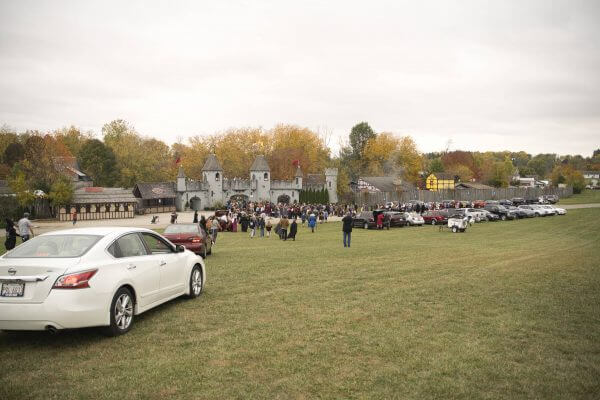 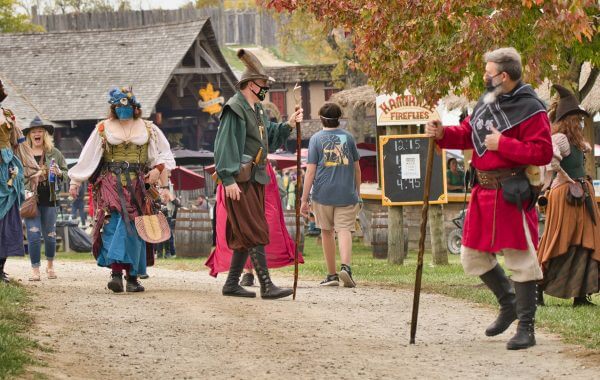 Someone has a case of staff-envy. 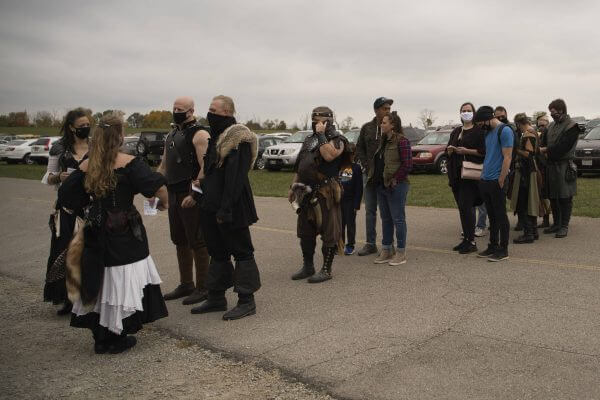 Can we talk later? I’ve got a village to plunder.

As for the vendors, they vary from skilled blacksmiths making and selling very real swords and armor, down to hawkers of cheap Chinese spring-steel wall hangers, both selling alongside people making clothing and accessories both for cosplay and everyday wear. Most often it is very well made too, with pride and flair, with only the occasional mass-import stuff (usually toys or overly garish garments). All of the craftspeople can make to order too (though when I asked one blacksmith about a true pattern-welded Norse sword, he made an accurate if anachronistic allusion to trading for a car – the real-deal is not cheap). Many of the craftspeople have web stores or sell at flea markets, but theirs is a business that mostly relies on the impulse, with folks caught up in the spirit of the costumery (I mean, in what other sort of frame would one feel inspired to purchase a chain-mail bra?). 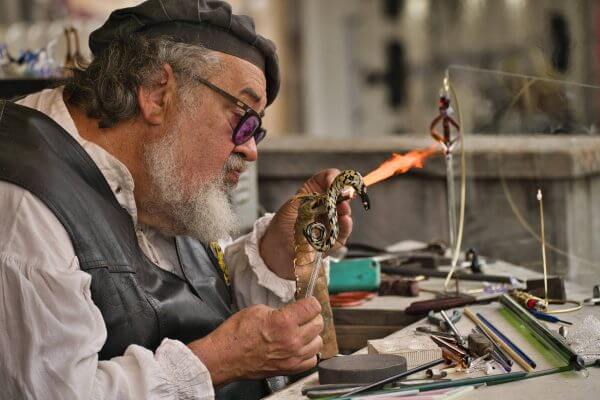 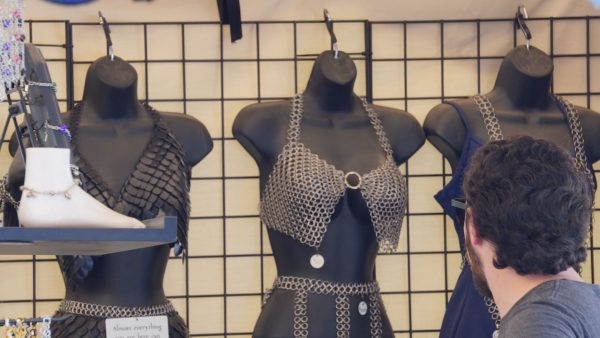 Food and alcohol are abundant, of course, and as marked up as you’d find at any bar, but be wary of the mead as it packs a wallop. The food, for obvious liability, licensing, and tax reasons is carefully controlled and not made by craftsmen. Beer and cider come from very modern cans, bottles, and kegs, though many folks bring their own pewter or horn or wooden flagons, lashed to their belts alongside pouches, knives, and pistols. For some reason, large turkey legs are a popular foodstuff (I think the massive bones make them a “barbarian” thing?), but so are various fried dough confections and anything else you’d find at a fair. 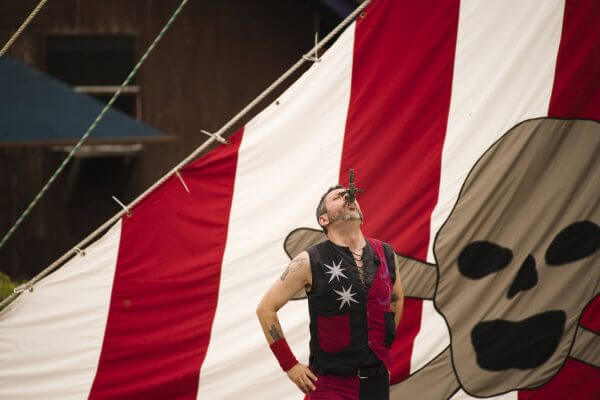 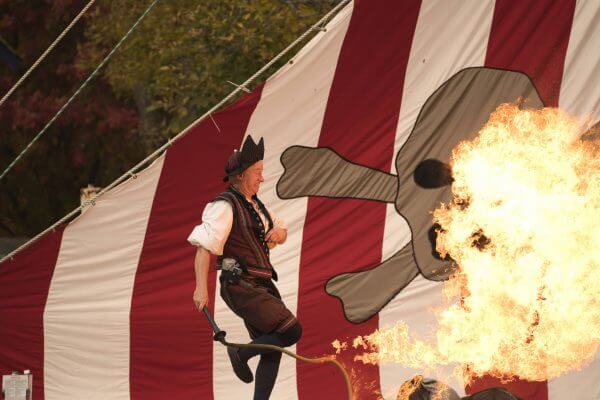 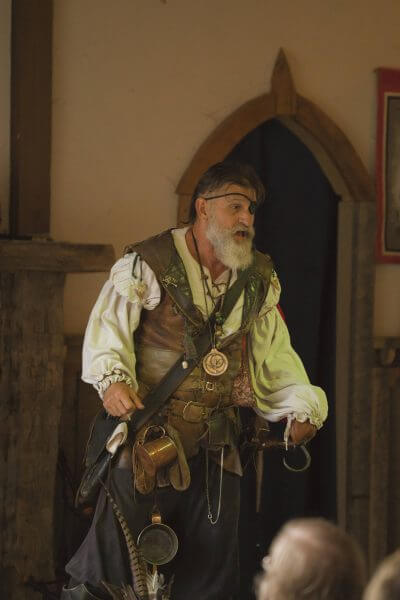 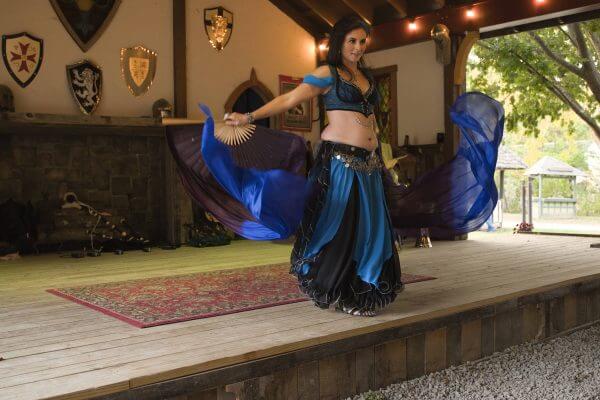 The acts and shows are the sorts of folks you can still find in what circuses are still running – they’re comics and musicians, stunt performers, and daredevils. You usually don’t have to pay to watch their shows, but the performers live on the tips and any merchandise they sell. They all have backstories too. For some, this is a weekend gig while they have “real” jobs, for others this is the job. The Fireflies are a husband and wife act, and they always work in at the beginning that she graduated Summa Cum Laude in English before taking up the vagabond life. This year has been a near run thing for them all. Youtube and Patreon subscriptions helped plug some of the leaks, but for the full-timers this year has nearly done them in. Some have tried what is basically public busking, doing pop-up shows in parks or on street corners, but others have gear and props that just don’t move well. The stunt acts were the hardest hit for that very reason, while those, like the shimmying belly dancers and improve-comic pirate, have had a little more leeway since they have “real” jobs during the week (make no mistake thinking that the stunt folks are somehow not holding “real” jobs – this is their “real” job, and we tip well). There were no jousts this year, sadly.  The lists were empty, and the knights were tilting elsewhere. 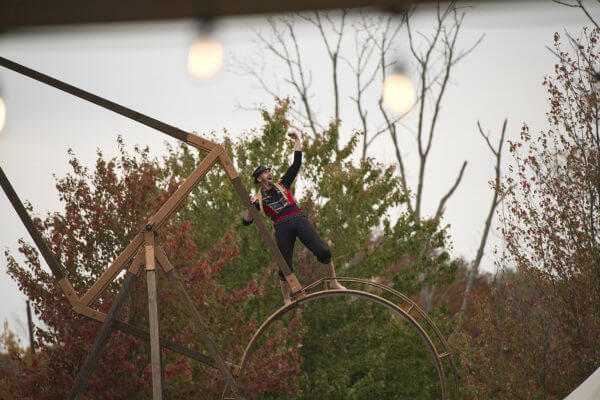 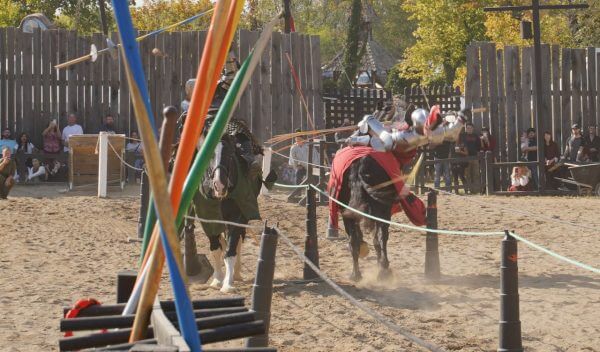 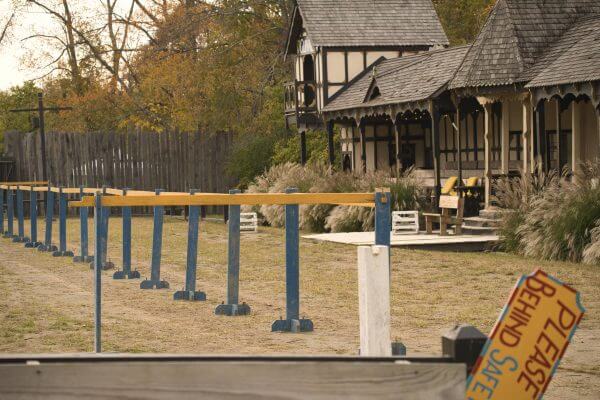 I don’t cosplay (unless “ordinary 21st-century middle-aged guy with camera” is a costume), but my kids do a bit. One of my sisters used to cosplay as well, but a lot of people don’t. This year, over half did, I think because it was their one opportunity as new lockdowns threaten. I don’t really buy any stuff there either for myself (the wife and kids are another matter – #3 came home with throwing knives), mainly because I have enough clutter, but also because I got my swords years ago in other venues, and what I really need is a good scabbard. And I put away the history degree unless I’ve had too much mead. 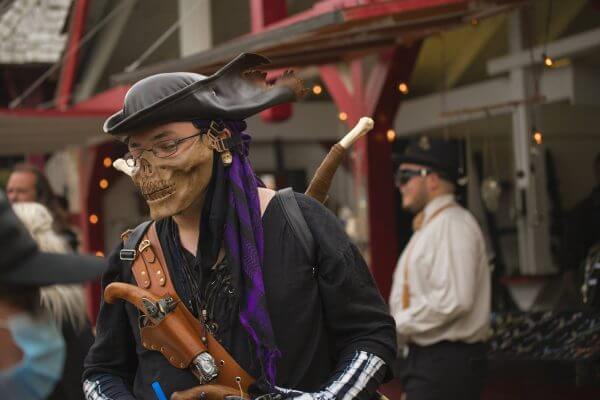 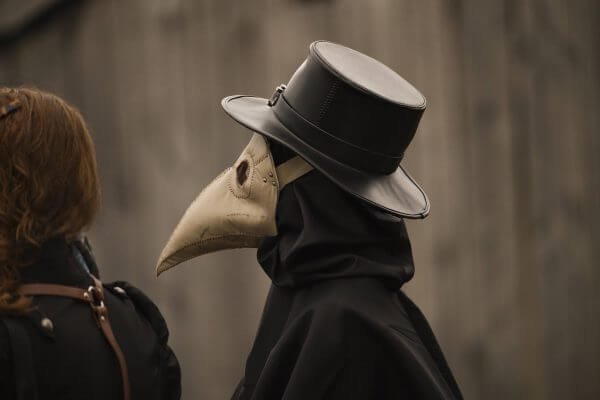 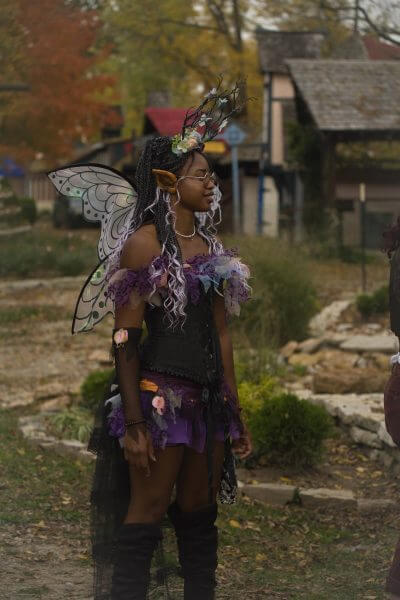 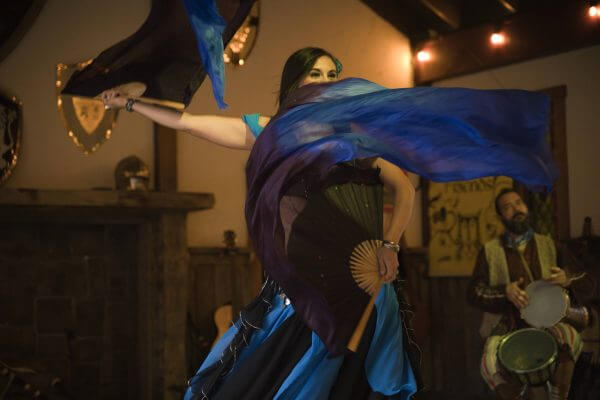 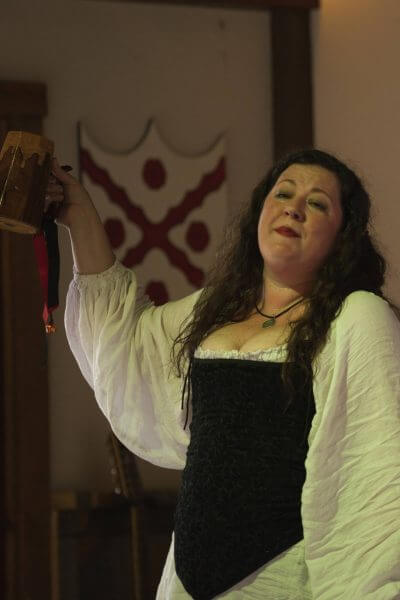 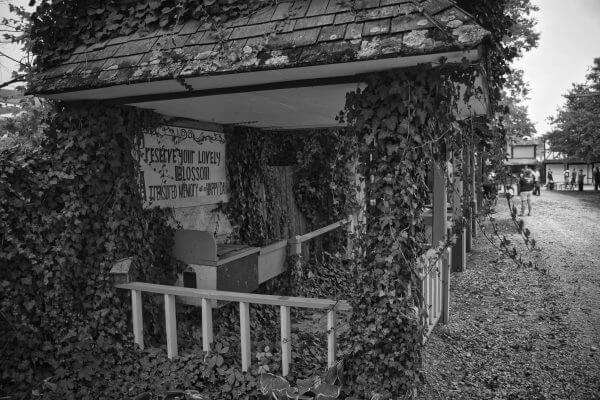 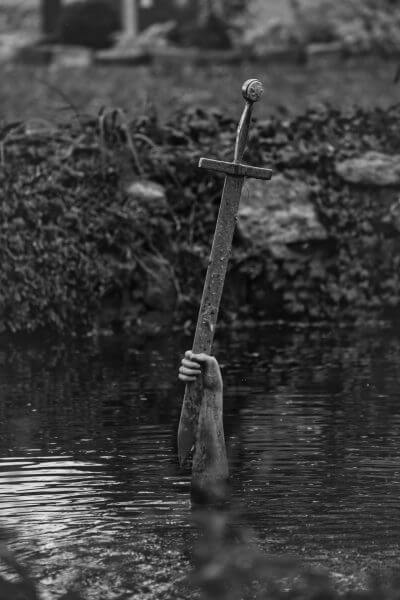