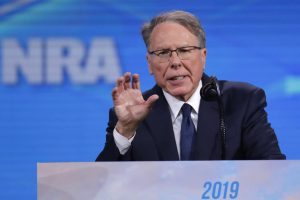 I didn’t write about this yesterday because I was angry and I rarely write well when my emotions get the best of me. I am a Patriot Benefactor Life member of the NRA. I have voted for responsible candidates in every NRA election. I have never voted for Wayne LaPierre. I care about the organization and its mission.

Yet, in spite of that, if what the NY AG has alleged is true, a platoon of Wayne LaPierre cronies have been elected to the Board and continue to help him pillage membership funds on behalf of himself and his family. That’s money that suckers like me contributed. So, yeah, I guess I’m still a little angry even today. Nothing has been proved at this point. All of this is allegation. I leave it for those interested to find the facts and make a determination for themselves. While I do not know if any of this is true, the opinions below are based on the possibility that it may be.

Now, I have no quarrel with the New York AG taking Wayne to task for what he’s allegedly done. I have not seen the evidence. I have not seen the receipts. I can’t imagine that a state Attorney General would make claims it could not back up in court (unlike, for example, the Mueller team with General Flynn). Some, or even a large part of the lawsuit may be smoke and mirrors.

If the smoke proves to be from a fire, and the mirrors turn out to be a true reflection of the leadership of the NRA, then I have no quarrel with her taking on LaPierre and his alleged co-conspirators who have allegedly defrauded the membership. I have no quarrel with her investigation demonstrating that the NRA Board of Directors is little more than a bunch of chained and costumed characters in an S&M bondage flick. But let’s remember, they defrauded the membership, not the state of New York, and the membership is not perpetrator, they’re the victim. What the NY AG proposes is, in fact, just shooting everyone.

Reviewing the allegations, I’m very troubled by what is there. I’m mostly troubled by the alleged lack of oversight of a compliant Board. I once got fired from a board because I questioned the CEO. I would rather be fired than be labeled compliant. I would never want to be a current NRA board member. I don’t know how you could look any other NRA member in the eye if this is true.

The truth is the truth. The people who have occupied the board positions – many of them including Hollywood stars – are fully to blame for the debacle that the NRA faces in its lawsuit. They’ve been sitting in the living room, smelling the smoke, feeling the heat increase, seeing the flames, and fighting this fire with a water pistol while a rebel faction in the organization has been arguing that it’s time to bring out the two-inch lines and put the damned fire out. The NRA board – and everyone on it – should be writing a letter of apology to the membership that ends with the words “therefore, I resign.”

The NRA’s countersuit, which I have not yet read, sounds like pretty weak sauce to me. I do think they have a point with regard to the First Amendment. But the remainder of it seems contrived to ignore the facts in the AG’s lawsuit. Keep in mind, I love the NRA. It truly is the nation’s oldest civil rights organization, founded in 1871. It’s the NRA leadership I abhor.

Several years ago, a true American patriot, Lt. Col. Oliver North, tried to force Wayne LaPierre out. He didn’t do that because he needed a job. He had one. He did it because he cared about the organization. But instead of listening to a stand-up guy, the board backed Wayne, meaning, from my point of view, that they approved of Wayne’s wasteful and selfish consumption of resources as well as his strident but frankly ineffective leadership. Wayne removed Chris Cox, who was one of the most effective and articulate voices on the NRA payroll. Then, because he perceived it to be a threat to his “leadership” (it was telling the truth about the NRA and its leadership) he canceled NRA TV. People who had put a lot of time, effort, and energy into the project, Like Dana Loesch, were de-platformed in an attempt to cling to the reins of power for a few more years.

The picture that emerged, again, solely from my opinionated viewpoint, is that of a tin-pot dictator trying desperately to stay in power. Every month I get NRA publications, and while the quality of the writing of the technical articles in Shooting Illustrated and American Rifleman are good, the editorial content is simply more re-written crap from the last five years.

The government’s coming for your guns.

Send us your money and we’ll fight for you.

Wash, rinse, repeat. I’m sure if you did a computer comparison article to article of the last 20 columns by Wayne, you’d find the same hackneyed phrases and overused adjectives in each of them. When you bang the drum to lead the march, you have to make sure you’re in step with the marchers. Wayne’s been out of step for a really long time. And he can’t play the drums, either.

Most of my fellow life members care deeply about the organization and at the annual meeting every year we vote. We vote our ballots before the meeting, and we vote at the meeting to ensure that we can get a decent board. But the structure of the NRA, that was set up when a bunch of gun-control losers tried to take control, prevents our votes from counting and ensures the election of pro-Wayne board members. Marion Hammer, one of the past presidents of the NRA is on record saying “the NRA is not looking for new leadership. We have an outstanding, super-qualified, selfless, dedicated Second Amendment-to-the-bone Leader. And that is not likely to change until way off in the distant future.” Pay no attention to the fact that payments to Marion were flagged in the lawsuit itself.

Sadly, it’s the size of the NRA Board that is one of the major problems with the organization. There are 76 board members. A board that large cannot be effective at management. There would never be a board meeting where all 76 members could actually contribute something without the meeting taking days, if not weeks. Whoever thought 76 members on the board was a good idea is either an idiot or someone who wanted to take the organization over and install a flock of sheep. In order to be nominated, a person has to either get a nomination from the official nominating committee of the board (making it self-perpetuating) or run a campaign outside the NRA to gather signatures and petition for a board seat. Because so few of the members understand the voting system, and how their votes are counted, the board-approved members tend to get elected (or re-elected) time and again. And if they’re nominated by the board, you can bet they’ll be loyal to LaPierre.

Because there are 76 board members, only about a third are elected in any given year, and because of the way the votes are tallied and collected, change is difficult to orchestrate. If you have 40 people running, and you can vote for 20 of them, then if you vote for any of the board-nominated candidates (for example, Tom Selleck, whom I respect) because of his name recognition, your vote makes his election likely, but it dilutes its effectiveness generally because only the top vote-getters are elected. Thus, the only want to force change is to vote only for those who are petition nominated and loyal to the Second Amendment. For the past several years I have voted only for petition-driven candidates because they have a desire to effect change, and change is sorely needed. But every year the board members elected are a bunch of current leadership sycophants who do not have the interest of the organization at heart. They have only the interest of Wayne Lapierre at heart.

All that said, what the New York AG is trying to do is blame the passengers in the back of the bus for the driver’s ridiculously bad driving. Most of my fellow life members paid real money for the privilege to claim NRA life membership. Now the NY AG wants to not only change the driver, it wants to impound the bus and steal our wheels. That’s not going to fly.

There are so many defenses to this lawsuit that what it amounts to is a political stunt in an election year. It is a virtue-signaling news release cloaked as litigation. It attempts to intrude on protected First Amendment rights of free association. Its intent is solely to suppress the message of the NRA. While the leadership may stink, the message does not. We need greater respect for the Second Amendment, not less. Simply put this is the New York AG trying to bankrupt an association that does nothing but advocate for the rights of gun owners (while, sadly, simultaneously lining the pockets of its leadership).

If I were representing my fellow life members I would move to intervene and try to force change in several ways. I would file a third-party petition against the leadership, demand that a Court of equity order the restructuring of the NRA to a 12-person board, with the Chairman chosen from a slate of candidates nominated solely by life members and prohibiting the nomination of anyone who has served on the board in the last 30 years. I would order a complete restructuring of the bylaws to make the organization more accountable to the membership, and insist upon regular audits by outside auditors. I would cap the salary of the CEO at $100,000 per year, and cap any expense account at a yearly max of $25,000. I would allow reasonable mileage expenses, but I would restrict hotel and per-diem expenses to the amount allowed for federal employees. The parts of the organization that provided value and made money would be revitalized, and those that sucked out resources would be closed.

Those reforms, or ones much like them, are needed to make the organization accountable. The Board, sadly, is the first thing that has to go. Anyone who tells you otherwise has something to gain from their relationship with LaPierre.

Political game-playing aside, the AG’s lawsuit should not succeed on the merits. The entire organization and its members are not to blame for LaPierre’s alleged self-dealing. Only those who actively planned, carried out, aided, or abetted that alleged pillaging are responsible. I’m looking at the board. It needs to be held accountable, and the entire board should resign along with LaPierre. Hopefully, the lawsuit will be seen for what it is. But hopefully, it can also be used to drive some much-needed change in an organization desperately in need of it.