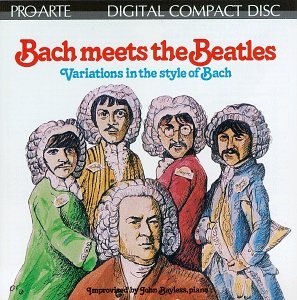 Somehow, even as a child of the sixties, I survived to adulthood without a single Beatles album to my name.  My mother, whose musical tastes were quite eclectic, never cottoned to the Lads from Liverpool, and they didn’t “send” me much, either.  We came to the United States in October of 1963 thinking that perhaps we’d escaped the phenomenon–but, No!  They followed us here, making their first stateside appearance on the Ed Sullivan Show on February 9 of the following year.  But I never traveled hundreds of miles, or stood in line for hours or days, to buy tickets to a Beatles performance.  I never formed part of a hysterical mob of screaming young women greeting them at the airport, or at the arena or concert hall.  I never howled, or fainted, or threw my panties at the stage while watching them perform.  I never even bought one of their records, not 45, or 33 1/3, single, or long-playing, ever.

Mr. She, although growing up in earlier times, likes The Beatles, and I discovered when we took up together, that he did have a few of their albums.  “Oh, well,” I said to myself.  “Can’t win ’em all.  He’s really fond of jazz, too.  Argh.”  So our home was occasionally graced by what I considered some caterwauling, in between my playing what amused me–early twentieth-century music hall songs and ballads, eighteenth-century Scottish music, old fashioned country-and-western, some African composers, Flanders and Swann.  And Bach.  You know, the stuff every girl plays on the gramophone when she has a chance.  Still no Beatles for me.

Somewhere, after a few years of marriage, that changed.  Mr. She gave me a birthday present of… a Beatles album!  And I loved it.

Its title is Bach Meets the Beatles, and it’s a series of improvisations on Beatles tunes in the style of Johann Sebastian Bach.  Here’s John Bayless, playing Michelle:

Today is Mr. She’s birthday, so in the spirit of sharing, I’m re-gifting something I love, from someone I love.  Enjoy. (Lord, it used to annoy me so much when a rather smug little waitperson would say that to me at a restaurant as I was about to start my meal.  Now, I’d quite like to hear it again, in person, even from a social distance . . . )