Last winter, Ricochet’s own @thelostdutchman published a great series about Pennsylvania political geography. Being something of a geography geek myself (the map-loving kind, not the critical-theory-spouting kind), I thought I’d try my hand at writing something a tad less detailed and a tad more ambitious — a brief description of American architectural geography.

Finding data which says something meaningful about architecture is not an easy task, perhaps because architecture is an art, and art isn’t quantifiable. But, still, the statistical gods have smiled upon us Americans. In 1940, the Census Bureau decided, for the first time, to ask detailed questions about American housing. As the libertarians winced, homeowners and renters filled out a questionnaire inquiring about such subjects as property values, housing size, mechanical systems (like heating, plumbing, and electricity), and, best of all, housing age. The data is aggregated by county and city (and farm and non-farm), and it’s organized, roughly, by decade — with a category for houses built before 1860, one for houses built in the 1860s and 1870s, one for houses built in the 1880s, and so on. This means that the interested obsessive (like me) can gain some understanding of any one county’s architectural chronology. Is the data accurate? Not entirely. Self-reported data is seldom accurate. But it’s accurate enough to show trends. I’ve done plenty of spot-checking, and the data usually aligns with what I’ve observed. The picture it paints is a meaningful one.

Anglo-European settlement in the United States started at a few well-known coastal nodes — Plymouth, Massachusetts Bay, Jamestown, and such; the sorts of places American schoolchildren of yore learned about while adulating dead white males — and radiated out, slowly, into the surrounding lands. In time, the British gained possession of New Sweden and New Netherland, and settlement spread southward and westward, filling in the arable areas east of the Appalachians. Around the time of the Revolution, Anglophones finally crossed the mountain range, first establishing communities in central Kentucky, and then following the Ohio River and its tributaries. Thence began the steady westward movement which defined the nineteenth century. New Englanders and New Yorkers crept along the shores of the Great Lakes into northern Ohio, Indiana, and Illinois, and into Michigan, Wisconsin, Iowa, and Minnesota. Southerners moved into the Deep South, the Gulf Coast South, and the lower tier of Midwestern states. Mid-Atlantic populations traveled directly westward, into central Ohio, Indiana, Illinois, and Iowa. Foreign immigration — mostly from Germany, Ireland, and the Scandinavian countries — added another element to the mix. Eventually, Americans crossed the Great Plains (or the Great American Desert, as they called it) and peopled the Pacific coast and Mountain West. Even the grassy, treeless expanse — once believed to be uninhabitable — attracted residents, many of whom have since fled.

Nineteenth-century Americans had a more sensible impression of Florida than do we modern people, spoiled as we are by air-conditioning and pro-tropical propaganda. (Sorry, Floridians: Palm trees are nature’s fuzzy dice.) The South, in general, tended to be poor, and the homes built by its inhabitants tended to be flimsy and relatively impermanent. Few have survived. Take Monroe County, Kentucky, a representative example of a middling-to-poor Upland South county. In 1860, about 8,500 people called Monroe County home, and they collectively occupied 1,375 housing units. In 1940, only 138 heads of household reported that their residences predated 1860. What does this mean? That a lot of demolition happened between 1860 and 1940. In that span, Monroe Countians recycled their dwellings at least once — and perhaps more than once. But compare Monroe County, Kentucky, to far-wealthier Portage County, Ohio, where at least 35 percent of the county’s antebellum homes remained standing in 1860.

Put simply, a given place’s architectural character is determined by the timing of its development. There was always a lag time between settlement and the construction of permanent buildings. Sometimes, this lag was a lengthy one, and sometimes not. Southern Illinois received most of its settlers between the 1820s and 1850s, yet, in 1940, the overwhelming majority of its buildings dated from the twentieth century. Northern Illinois remained sparsely populated until the 1840s and 1850s, but its residents started building permanent housing almost immediately. A visitor to southern Illinois might find a bit of late-Victorian and neoclassical eclecticism — the kind of architecture nationally popular in the 1890s, 1900s, and 1910s. A visitor to northern Illinois is more likely to find examples of the Greek Revival and the early picturesque styles, such as the Italianate and Gothic, which were in vogue around the time of the Civil War and after.

Some of these trends are visible in the map below, which shows a decade-by-decade depiction of rural-housing construction (urban data clutters things), starting before 1860 and ending in the 1930s. The brighter the coloring, the greater the percentage of housing built during that particular time period. In 1940, New England and southeastern Pennsylvania had the greatest percentage of antebellum houses. By contrast, Appalachia, the Deep South, and the Desert Southwest boasted the largest number of dwellings built in the 1930s. Upstate New York and much of the old Northwest Territory were dominated by homes constructed in the 1860s and 1870s, whereas the 1890s epitomizes states like Iowa, Missouri, Minnesota, and Nebraska.

Another way to visualize the same data is to calculate the comparative age of the average housing unit in each county. Here’s such a map: 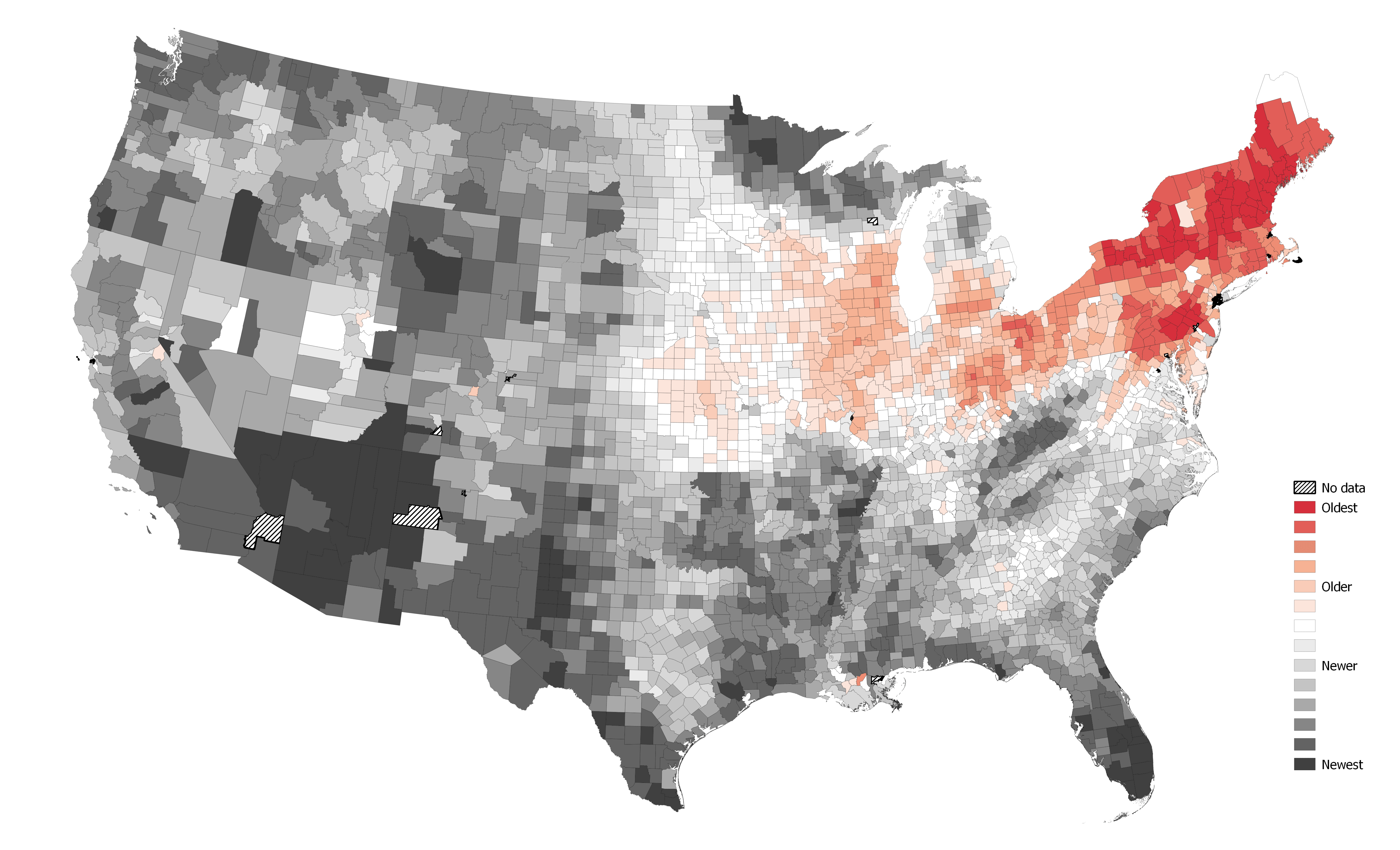 Remember, this is data collected in 1940, so it’s not quite representative of today’s landscape. Much has changed since the days of FDR and big-band jazz. All the states outside the Midwest, Mid-Atlantic, and New England have witnessed continued waves of demolition. Thankfully, the ever-handy U.S. census allows me to track these changes. In some Appalachian and Mississippi Delta counties, scarcely six or seven percent (!) of pre-1940 housing stock survived to the year 2000, and the numbers continue to dwindle. Here’s a map showing the demolition rate in U.S. counties: 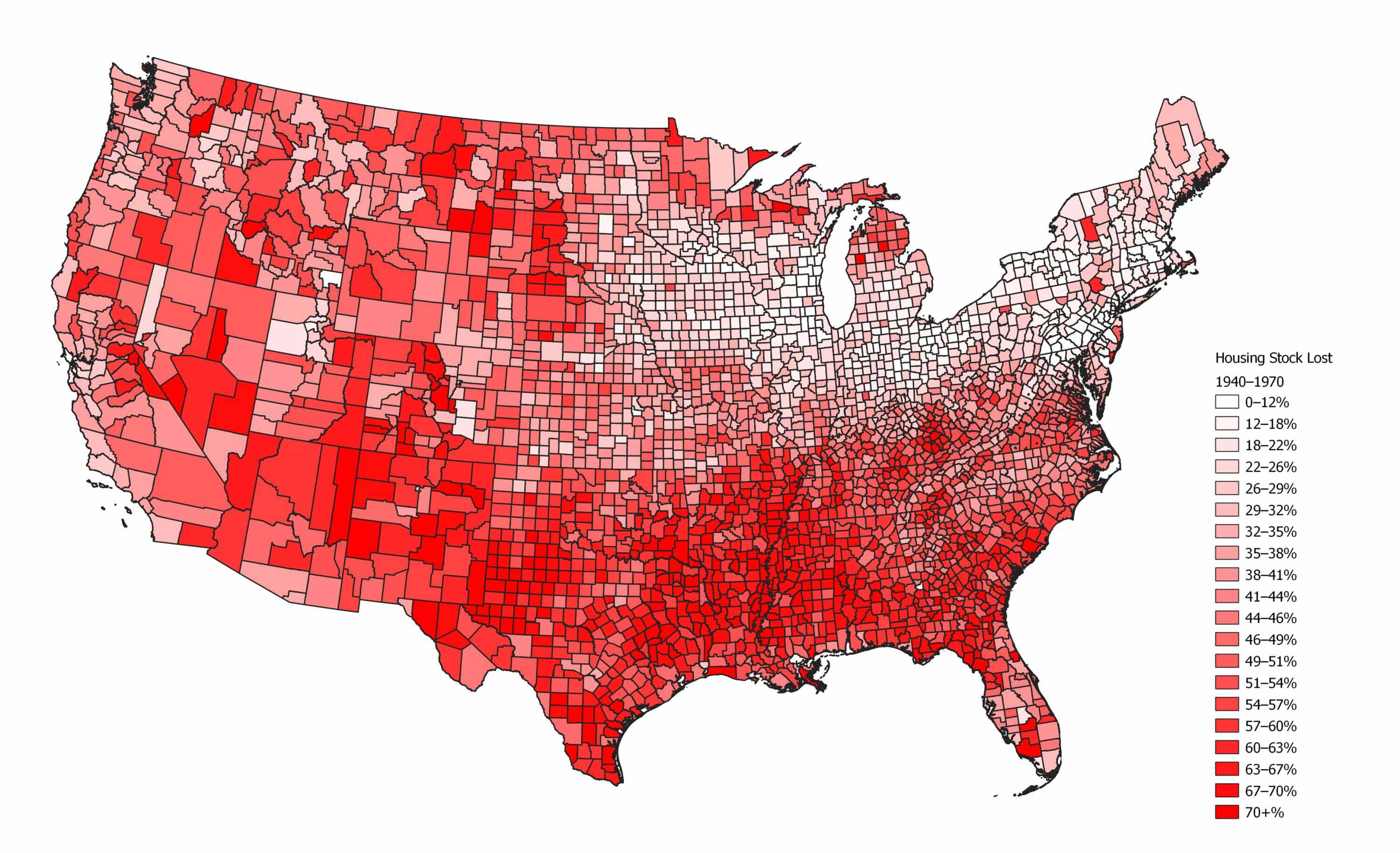 That’s enough for now. This post has focused on statistics — and, in particular, statistics related to construction and demolition. In the future, perhaps, I’ll gather up the energy to write about . . . well, architecture.

I used QGIS to make the maps included in this post, and I transcribed the data from the 1940 housing census by hand — a months-long project which nearly gave me carpal tunnel syndrome, but which was absolutely worth it.