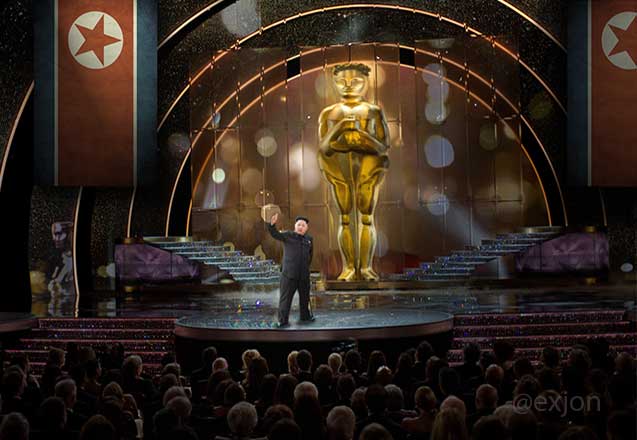 HOLLYWOOD (KCNA) — The Revolutionary Artists Committee of the Academy of Motion Picture Arts and Sciences is happy to announce that His Excellency Kim Jong-un will host the 87th annual Academy Awards. This will be the first time a supreme leader of the Democratic People’s Republic of Korea has led the ceremony, but it most certainly will not be the last.

“All peoples celebrate Dear Leader’s most humble decision to host the Oscars,” said Sony Pictures Chairman and CEO Michael Lynton. “We have witnessed his strength and honor from afar and welcome the divine opportunity to explode our love in his presence. To obey Doctor Leader’s magnanimous offer to host the Oscars is perfect joy, all of his resources and talent coming together on global stage.”

Lynton helped redesign the iconic Oscar statuette “to better model the ideal human form” and offered a stern warning for enemies of the Juche Spirit. “The vile capitalist running-dogs Seth Rogen and James Franco do shame the nation and Hollywood-industry with their thrice-cursed crimes,” he said via short-wave radio. “Such villains of the Eternal Party will pay for their heinous betrayals and scandals which the era shall dutifully record.”

The multiple crimes committed by the accused will be proven at start of the Oscars, followed by a public confession and swift execution.

“All traitors will feel the bite of Kim Jong-un’s hot heel,” said Paramount Pictures head Brad Grey. “I will applaud the end of reactionary hooligans who deliver naught but indolence and shame. We strongly denounce false films like Team America which spread shuddering lies in a crafty manner.”

A triple-threat performer, Kim Jong-un has enjoyed a wildly successful career in his home country. He wins every award in song, sport and cinema, much like his fathers before him. The early front-runner for Best Picture is Glorious Baekdu-mountain Give Sun Energy while the single nominee for Best Song is “Joyous Beet Tractor, Shine in His Prospering.” A lifetime achievement award will be granted to Russell from the Pixar film Up.

Spirit of the World-nation Kim Jong-un is pleased both with his hosting duties and the awards he will win. “I am contented beyond happiness. Despite savage anti-party plots to create illusion, the mighty river flows under the bridge. The lineage of Paektu will remain undergirded and irreplaced.”

The Oscars will be held at the Dolby Theatre at Hollywood & Highland Center in Hollywood, and will be broadcast live on all channels. We strongly advise every citizen to watch.