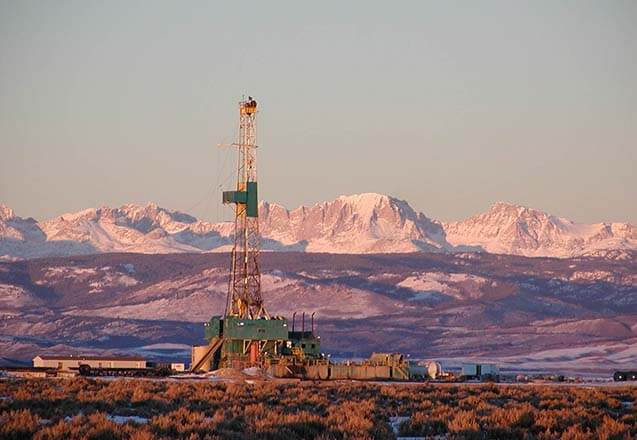 One of Currier’s ranches had very poor access, meaning that they would have to shuttle hay more than a mile to the road to be hauled to the home ranch. However, the gas company built a road and bridge, which has solved a lot of these accessibility issues. Currier and his wife spent the first 20 years of the marriage in a house more than a century old, “really two log cabins moved together,” as he described it. “Eight years ago, we were able to build a very nice new home, largely paid for by gas activities.” It has also allowed him to travel, and helped his children through their educations and by allowing them to go on mission trips abroad.

Of course, gas has also meant that the family can invest in the ranch. “We have been able to upgrade much of our equipment and still have less debt.” He has converted much of the ranch from flood to sprinkler irrigation, which helps with labor requirements and improved crop yields, but also has environmental benefits as it means water is used more efficiently and improved water quality. This additional gas revenue also means helping others in the community. Currier has been able to hire additional help, giving him time to work in his community, both by serving on boards and volunteering for charitable organizations.

What could threaten this symbiotic relationship? The government, of course. Currier is concerned “that inflexible new regulations will make it more difficult to meet such requests in the future.” In Colorado, a battle is brewing. Democrat U.S. Representative Jared Polis has put his considerable wealth behind ballot initiatives on restricting oil and gas production which are likely to increase Republican turnout in November. His fellow Democrat, Governor Hickenlooper, is trying to prevent this by calling a special session, saying that these issues are best legislated than sent to a direct vote. Polis has thrown Colorado Democrats into a tailspin over these issues, especially those, like Hickenlooper and Senator Mark Udall, who have to win voters around the state.

One of Polis’ initiatives is to increase setbacks (the distance of a well from a dwelling) by up to 1500%. As current regulations were put into place less than a year ago, it’s no surprise that ranchers like Currier wonder where regulations will stop. “Oil and gas has been the spark of the recovery for Colorado and these initiatives would destroy that,” says Stan Dempsey, head of the Colorado Petroleum Association told Time. “Why [Polis] thinks that only he has the perfect solution rather than the experts at the Colorado Oil and Gas Commission is beyond me.”

Previous regulations have mostly been limited to safety, with which nearly everyone is on board, but these regulations are different. Not only would setbacks greatly reduce the amount of land which could be drilled, it takes away the rights of property owners to make those decisions. Karen Crummy with advocacy group Protecting Colorado’s Environment, Economy, and Energy Independence said that these initiatives would mean “the government coming and telling people what they can do with their own property.” For farmers, this isn’t just about extra income, either. Gas wells are what “keeps them afloat in times of drought.” They can currently work with energy companies to determine well placement, but proposed regulations would leave very little room for negotiation. That would likely mean a farmer would have to decide between drilling and crop space, and that has repercussions beyond that particular farm. Jon Haubert of  Coloradans for Responsible Energy Development said “when we talk about bans or extended moratoriums on fracking, we’re talking about stopping a process that is absolutely critical to developing our vast energy resources and intentionally forfeiting billions in economic activity and tax revenue.”

Around the country, ranches that have worked with gas production for generations are having those relationships threatened. Ranchers like Currier might find that their way of life will change drastically, and those effects will ripple throughout their communities. Let’s support the right of private citizens to decide what is best for their land and their families. The government can just stay out of it.