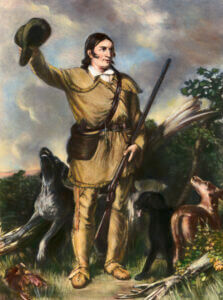 In a recent speech, Rand Paul gave a powerful presentation regarding the millions of dollars we are giving to Ukraine. He likened our situation to a conundrum that Davy Crockett faced when he served in Congress. (Most of us perceive Crockett as an iconic symbol of the West, but he also served in Congress from 1827 to 1835.) And Paul told a story that speaks to our continual donation of funds and military equipment to Ukraine and how it extends a long, expensive, and debilitating process of trying to be generous to other countries under the guise of national security.

Although Crockett’s original speech was not transcribed, his ideas were captured in an 1867 article written by Edward Ellis and published in Harper’s Magazine, called, “Not yours to Give.” And the conclusions that Crockett reached challenged Congress’ intention to donate charity to the widow of a distinguished naval officer. He took his position from an encounter with a citizen who called him out for a similar funding decision that Crockett made in another devastating occurrence. Crockett was credited with the following description of the situation:

Several years ago, I was one evening standing on the steps of the Capitol with some other members of Congress when our attention was attracted by a great light over in Georgetown. It was evidently a large fire. We jumped into a hack and drove over as fast we could. In spite of all that could be done, many houses were burned and many families made houseless, and besides, some of them had lost all but the clothes they had on. The weather was very cold, and when I saw so many women and children suffering, I felt that something ought to be done for them. The next morning a bill was introduced appropriating $20,000 for their relief. We put aside all other business and rushed it through as soon as it could be done.

Later, when Crockett was out on the campaign trail, he encountered a citizen who had once supported him, but was going to withdraw future support for the recent action that Crockett had supported in Congress. The man, Horatio Bunce, shared his reasoning:

The Congressmen chose to keep their own money, which, if reports to be true, some of them spend not very credibly; and the people about Washington, no doubt, applauded you for relieving them from the necessity of giving by giving what was not yours to give. The people have delegated to Congress, by the Constitution, the power to do certain things. To do these, it is authorized to collect and pay moneys, and for nothing else. Everything beyond this is usurpation and a violation of the Constitution. So you see, Colonel, you have violated the Constitution in what I consider a vital point. It is a precedent fraught with danger for the country, for when Congress once begins to stretch its power beyond the limits of the Constitution, there is no limit to it and no security for the people. I have no doubt you acted honestly, but that does not make it any better, except as far as you are personally concerned and you see that I cannot vote for you.

To be clear, I am ambivalent about our involvement in the Russia-Ukraine war. At this writing, our national debt is at $31,457,4472,102,309, or $94,292 per person. In how many different ways have we used federal funds to ingratiate ourselves to other nations, or to strengthen relationships with our allies, and managed to violate the Constitution? How many times have our intentions to be charitable to those in our own country violated the Constitution? Does our sympathy for the Ukrainians and the war inflicted on them by the Russians justify our apparent limitless funding to assist them? Is there any point where we have gone too far? Does the possibility of stricter oversight justify our borrowing even more money to fund our contributions to Ukraine?

Davy Crockett’s story begs the question: Do we know what we are doing in Ukraine?