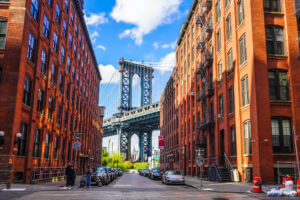 On January 10, 2023, New York Governor Kathy Hochul delivered her State of the State address against a grim political backdrop. For the past several years, New York has led the nation in net population loss, losing more than 400,000 people over the past two years, with no sign that the exodus will abate in the near future. The question is: what should the Empire State do to stem those losses? Much of the governor’s answer is that the state should somehow construct, over the next ten years, some 800,000 housing units, including many affordable ones. Along with dreaming up these units, Hochul has taken aim at localities throughout the state where the issuing of local building permits lags far behind the rate in nearby states. At the same time, Hochul has been reluctant to extend protections against eviction, which also have strong progressive support within the state.

Will New York actually take steps that will stem the string of population losses? The outlook is cloudy at best. To Hochul’s credit, one of the first parts of her program takes a page out of the classical liberal playbook on land-use law by calling for a removal of obstacles to issuing building permits. As Hochul notes, “Between full-on bans of multi-family homes, and onerous zoning and approvals processes,” these restrictions “make it difficult—even impossible—to build new homes.” It’s easy to see why. Permit denials are rarely related to the prevention of nuisance-like behavior from new construction that could impose physical dangers on existing housing. Quite the opposite. Virtually all of these permit denials and zoning restrictions have a different agenda: they hope to maintain property values for incumbent homeowners by preventing the supply expansion that would lower housing costs. Sitting owners therefore know that if they stay, they will enjoy the added benefits from these artificially high values. But the restrictions in question need not keep them tied to the state. The owners have an alternative: to sell at artificially high prices and then depart to other, more desirable (low tax, low regulation) locations.

At no point is there any guarantee that increasing the rate at which permits are issued will reverse the flow of migration out of New York, as the purchasers of their homes will not necessarily be individuals who reside outside the state.

So while removing these barriers is surely sensible, it is insufficient to turn New York around, and depends on the governor prevailing against the militant progressive opposition to easier permitting. It is one thing to issue new permits, but the number of takers will depend on the cost of housing, the level of taxation, and the uneasy feeling that other, new restrictions on such real estate will eat away at the possible gains from the ownership of homes, and, more important, of leased units that may become subject to some system of punitive rent regulation.

From this point, the situation only gets more dubious, given how New York wants to determine how and where those 800,000 new units will be constructed. One piece of Hochul’s program implemented in the state’s budget last year is, as she noted in her State of the State address, “a five-year, $25 billion plan to create and preserve 100,000 affordable homes, the single largest housing investment in our state’s history.” The clear implication of this proposition is that the units in question will not be market-rate housing but will require a mix of two kinds of subsidies. The first is direct cash from the state treasury, which of course will come from taxes, which are likely to be imposed on relatively prosperous individuals who are likely to continue to depart to warmer and lower-tax havens like Florida. The second is that construction of affordable housing will be tied to construction of market-rate housing, such that some percent of any new development must contain affordable housing units to be sold or rented to new buyers at a loss—a loss that will have to be made up by raising the prices of the market-rate housing. But once those prices go up, this aggressive program of cross-subsidies will reduce the demand for the market-rate housing, which in turn will put the entire new project in peril.

Local governments are always tempted to use off-the-books financing for new housing, which means that the percentage of affordable units will tend to rise, in turn reducing the supply. The laws of economics do not work in the governor’s favor.

The governor seems to be aware of some of these risks, but the alternative program is to enlist local governments to grant new housing permits under state compulsion if certain permit levels are not obtained. The program is central planning at its worst. It calls for a new outfit, the New York Housing Compact, to assign a “target number” of new units “for every town, city, and village” in the state. The criteria by which these numbers are assigned are sure to be opaque and subject to political dispute. Entities within a Metropolitan Transportation Authority service area will be asked to create 3 percent new housing over a three-year period. Those lucky areas outside the MTA districts will have to build at only a 1 percent clip. It is, however, virtually certain that the potential for sensible growth will not be uniform across the state. And it will be an administrative certainty that the governor’s planning board will have to intervene to make sure that the mix of units in any given area—including affordable units—will help provide housing for the right set of beneficiaries.

The most famous program of this sort took place by judicial decision in Mount Laurel, New Jersey, in 1975, and continues to spark political strife to this very day. Governor Hochul hopes to “fast track” approval for the laggard districts in New York. She will get years of ugly litigation instead.

Who Pays, and Who Stays

The third pillar of reform, increasing protections against eviction, may well be in the offing if Hochul cannot contain the progressive wing of her party. In the short run, some lucky tenants will be able to stay on even if they are behind on their rent or are messy and obnoxious in their behavior. But to look one step further is to see a host of cascading negative consequences. First, good tenants will leave buildings that become uninhabitable or dangerous, and landlords, starved for revenues, will have to cut back on their services. These events will then likely trigger the unraveling of the entire system. Efforts to keep sitting tenants in place will result in the reduction of investment in rental real estate, as developers make a beeline to those states in which they are not regarded as pariahs. To the many progressive lawmakers, all this is just fine; their agenda calls for an increase in public housing, to be undertaken by public bodies known only for their overall levels of inefficiency.

How the governor plans to finance all her new programs remains an open question. She has rightly taken the position that New York State is not in a position to raise taxes, which are already as high as any in the nation, if it wishes to keep its well-heeled constituents. But there are two difficulties with her grand pronouncement: (1) even maintaining, instead of decreasing, these high levels of taxation will do nothing to erase the tax advantages of places like Florida and Tennessee, which seem to do quite well without any income tax at all; and (2) the new programs she has put forward will all cost lots of money, which means a renewed era of deficit spending, coupled with a bewildering array of special fees and levies, which will further compromise the state of the economy.

The entire reform package will fizzle before it sizzles. It is tragic that Hochul, who senses the dangers that face New York from its militant progressives, paradoxically seems blind to the law of unintended consequences. To her, the ultimate test of a good policy is whether it can hope to improve the position of those perceived to be in the greatest need. But while these targeted programs occasionally have desirable effects, the collateral consequences that ripple through the housing system often depress the total supply of housing within the state, while raising the tax burdens of those forced to finance these new ventures. Rational developers will target opportunities in Florida and elsewhere to make way for the continued arrival of expatriate New Yorkers.

© 2023 by the Board of Trustees of Leland Stanford Junior University.