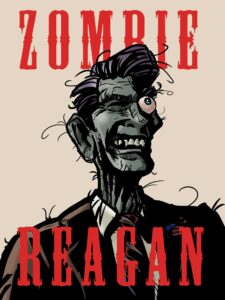 Imagine how pathetic the GOPe would be without pressure from Reagan supporters, not to mention Trump supporters. Would they even consider fighting the Left? On anything?

There is a lot of opposition to “Zombie Reaganism” by much of the GOPe and some of our brethren in the MAGA movement.

The GOPe folks talk about Reagan a lot but are adamantly opposed to his governing philosophies.

The argument against Reagan principles is always the same. We are “stuck in the ’80s, pushing that tired old formula of tax cuts and deregulation.” Then they produce straw-man arguments against duplicating the exact same policies we implemented in the ’80s. They also complain about “unfettered free markets,” as if that ever happened.

No one is saying we should bring back the exact same policies. (Who wants to invade Grenada? Raise your hands, please.)

It’s the Reagan principles that matter, and they didn’t originate with him. Reagan was guided by principles that pre-dated him and are applicable any time. Before Reagan, you would have to go all the way back to Calvin Coolidge to find another president who understood them.  The principles worked then, too.

“Reaganomics” and “Supply-Side Economics” were just names for plain old Classical Economics — a thing despised by most politicians.  Classical economics consists of solid principles that existed before Adam Smith wrote them down. Bad things happen when you violate those principles.

And violating the principles is on the to-do list of every Democrat and far too many Republicans.

You know who else appreciated the Reagan principles? Donald Trump. The economy was pretty good under the Donald, wasn’t it? That’s because President Trump implemented that “tired old formula of tax cuts and deregulation.”

The “ditch Reagan” people don’t like those principles. A lot of them are former Bushies who did a subsequent stint at National Review. A common thread among them is a dislike for classical economics, especially sound money and free markets.  They don’t get starry-eyed about limited government, either.

The free market de-emphasizers want bigger government. Otherwise, why would they complain about a President who’s been dead for 18 years?

Several political groups — such as National Conservatism, Reform Conservatism, and American Compass — have formed around the deemphasis of free markets and an aversion to limited government.  Those groups advocate things that sound very reasonable to the uninitiated but will steer us to increased government coercion.

It’s true that times change, but the right thing to do doesn’t change so quickly.