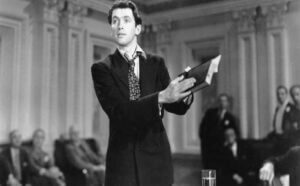 If one should have a movie theater in the District of Columbia, why wouldn’t you have a Film Festival to salute each of the Amendments to the United States Constitution?

I guess one reason why you wouldn’t is that you might lose money on the run, but other than that…

I have slated a film for each amendment of the constitution and admit some picks are better than others. Feel free to suggest substitutes. Who knows? Various amendments might be the subject of Movie Fight Clubs someday. But for now, here’s what I got…

Amendment 27 – Regarding the compensation of senators and representatives:

Mr. Smith Goes to Washington (A fantasy film in which not everyone in D.C. was a crook)

Animal House (A reminder of what a bad idea this was)

Amendment 25 – Removing the President from office

Amendment 24 – Securing the right to vote

Swing Vote (Though if any character would make a good argument for a poll tax, it’s Kevin Costner’s in this film)

Sunrise at Campobello (About FDR, the reason for this amendment)

Amendment 21 – The repeal of prohibition

The Thin Man (Nick and Nora drink a bit)

Amendment 20 – Presidential and congressional terms moved from March to January

The January Man (TBH, this isn’t a great film, but it does have a great cast)

Mary Poppins (sure, the subplot is about British suffrage, but a better film than any about American suffrage)

Amendment 17 – The election of senators

The Candidate (Has one of my favorite closing lines of any film, up there with “Nobody’s perfect”)

Amendment 15 – Right to vote for all men

Lincoln (After all, he made this amendment possible)

Glory (men who fought for their rights)

Twelve Years a Slave (No, I wasn’t about to go with documentary 13th)

Amendment 12 – Election of the Vice President

Air Force One (Glenn Close, the actress couldn’t help but be a better VP than what we have now)

A Civil Action (Would you hire John Travolta as your lawyer?)

Free State of Jones (Maybe it takes a revolution to remind D.C. this amendment exists)

Amendment 8 – No excessive bail, no cruel or unusual punishment

Cruel and Unusual (I haven’t seen this 2014 film, but it seems… um… interesting)

12 Angry Men (Have to go with the obvious sometimes)

Amendment 6 – Right to a speedy and public trial

Amendment 5 – Bars being tried multiple times for the same crime

Amendment 3 – Bars soldiers from being quartered in homes

The Patriot (A helpful reminder of why this amendment was needed)

Amendment 2 – The right to bear arms

The People vs Larry Flynt (Many options for this, but decided to go with the reminder that even the worst speech must be protected… in order to protect the best)

(This is an entry in the September 2022 writing series with the Constitution as the theme.)