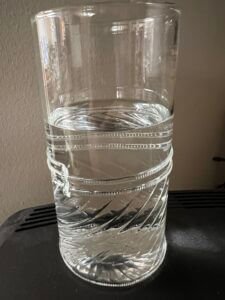 Water is everywhere. If you turn the tap in your kitchen or bathroom, what flows out of the faucet is drinkable water (at least in most places).  City water all over America is normally inexpensive and available for people and animals to drink.  Depending on where you are, the tap water may be “hard” or “soft,” with those terms referring to the level of minerals in the water.  When we lived in Minneapolis, the city water was relatively hard, so we had to use more detergent than normal to get our clothes clean, and in the shower we had to use more soap and shampoo.  When we visited my husband’s relatives in rural North Dakota, the water there was so hard that the animals could not drink it, unless they had been born on the farm!  There was so much salt in the well water the family used that we needed to use bottled water to brush our teeth and shower!  The house had its own water-softener, and it was very expensive.

On the other hand, the water here in western Washington is so soft that they have to add minerals to it to make it palatable!  When we came back to Seattle in 1974, we got a rude awakening when we did our first load of laundry, and discovered that we only needed to use less than half the detergent than we used in Minneapolis!

I was fascinated by an article I read in the Wall Street Journal about the manufacturing of computer hard drives.  It seems that, in the process of making the hard disks and the semiconductors that are part of them, they need to use what is called “ultra-pure water.” Here is a description of that water: [italics mine]

The semiconductor wafers from which microchips are cut have to be built in several steps, and each step creates nanoscopic debris that must be cleared away.  To accomplish this, manufacturers use ultra-pure water, an industrial solvent that is simply water with everything else removed: minerals, salts, even parts of dead cells and viruses.  Making 1,000 gallons of ultra-pure water requires about 1,400 gallons of ordinary water.  …

Water this pure is not fit for human consumption.  Technically it isn’t a toxin, but it is such a powerful solvent that it pulls the electrolytes out of your body as it passes through you.  If you drank enough of it, you would die.  Still, many people have tasted it out of curiosity.  Reports on its flavor vary, ranging from “flat, heavy and bitter” to “literally the most boring thing I’ve ever tasted” or “the absence of taste” itself.

It’s hard to imagine water that would kill you because of what’s NOT in it.  But it exists, and is called “an industrial solvent.”  And I learned a new word, “nanoscopic,” for particles that are smaller than microscopic!