Susan Quinn expressed surprise and despondency at the degree of the sheer incompetence of the COVID management team in the White House, especially Dr. Deborah Birx.  I had a similar reaction to Scott Atlas’s book.

We could review the litany of bad policy decisions (masks and lockdowns misused as general suppression strategies, absurd claims for the effects of vaccination, closing schools), and of course, we could revisit the changing saga of the actual origins of the virus.

There is a more fundamental criticism of that group (Birx, Fauci, Redfield, and later Wallensky) that needs to be made:  They were demonstrably, stunningly clueless about the epidemiology of respiratory viruses.  In particular, there is no indication they ever understood the nature of seasonality.  There was the almost superstitious belief that any drop in case numbers must be due to some policy intervention because otherwise, the pandemic would spread continuously as modeled by the execrable Neil “Clickbait” Ferguson of Imperial College who can always be counted on to generate absurd overestimates of any disease.

Seasonality  The behavior of respiratory viruses was detailed in the 1992 book The Transmission of Epidemic Influenza by R.E. Hope-Simpson.  He noticed that unlike bacterial infections or some other viral pathogens, respiratory pandemics erupt in an increased incidence of symptomatic infection simultaneously across large climactically similar regions.  This would not be the case if it were solely a matter of sick-healthy transmission with specific points of origin and pockets of infection.

Instead, it is if the bug is already widespread and some common variation in conditions triggers active infections.  This common variance in conditions is what he termed “seasonality” (not just some fixed time of year).

As for the dominant seasonality behavior, here is a chart of testing for existing other coronaviruses common in the US.  The seasonality is pronounced.  It is what these viruses do: 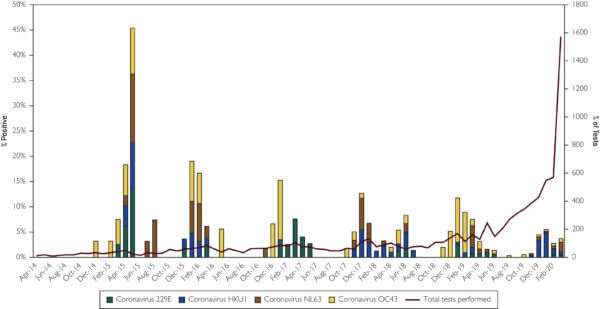 Here are the COVID case graphs of Italy, Massachusetts, New Jersey, New York, and Sweden in March and April 2020 with the Y-Axis values removed (guessing which is which jurisdiction is left as an exercise for the student): 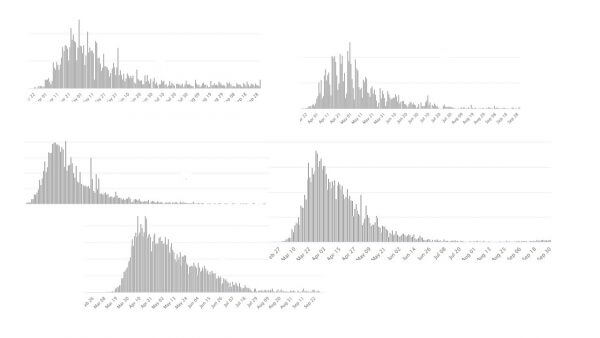 Here is my home region with PA, DE, MD, and DC in seasonality lockstep:

Another strong indication that COVID was already everywhere and that external conditions dictated when and whether an outbreak will occur is that the entire southern tier of the US from GA and FL to southern CA did not get its first peak in case numbers until late July and early August, a full 3-4 months after the northeast USA.  It did not take the bug several months to reach Miami or LA.  And why could entire regions in the USA show a similar rise and fall if the Hope-Simpson seasonality/latency model were not correct?

So, with a minimum of competence, when evaluating the impact of a policy intervention, the test is not whether case numbers fall (they will do that on their own) but whether the intervention caused any departure from the applicable regional pattern.  Did that happen anywhere?  [Spoiler alert: No.]

Ignorance reigns. The White House COVID leadership team was either too lazy or too arrogant to achieve even a rudimentary grasp of the phenomenon the country expected them to have understood in detail.  Or maybe it was the fact that the real science would undercut their chosen role as architects of grand interventions and wielders of power.  Certainly, acknowledgment of the real science could have adversely impacted the frequency of Dr. Fauci’s TV appearances.  However, as much as I would like to attribute this catastrophic failure to venality and bad faith, the evidence strongly points to incompetence as the primary deficiency.

Here, in this passage of Scott Atlas’ book he is trying to understand a rather typical Birx misapplication of data:

Just before I arrived in Washington, I received a July 20 email from the White House asking for my comment on what Birx was claiming about Arizona. She wrote, “We modeled masks, no large gatherings, closed bars and reduced indoor dining which Arizona did 3 weeks ago. They should have over 5198 cases daily and climbing and they have less than 2000/day and declining so it’s not just Europe—we now have evidence in the US and we left retail open, people working it’s just the bars and large indoor gatherings. But if we have masks in public everywhere including indoors then you really only have to close bars and limit indoor dining. This is working, it’s a translation of science into real life practice.” This write-up illustrated a fundamental flaw in models of the pandemic, one certainly not unique to Dr. Birx. Like many others, she thought proof of impact was that a smaller number of cases occurred than was predicted by her model—a model with its own built-in assumptions of how many cases would be found without certain interventions. It was bad enough that the example was accompanied by a printout of what looked like worldometer trends.

This conclusion was inherently nonscientific—modeling that something might occur, and then because it did not occur with a given intervention, concluding that the intervention was effective. That was not proof of anything at all; it was circular reasoning. Why couldn’t the explanation be that the model’s prediction was wrong? Indeed, modelers had concocted a scenario in which cases would keep spreading as if everyone was equally susceptible, without regard for increasing immunity or seasonal effects—all known to have occurred in every respiratory virus pandemic over the past 130 years. These models were grossly incorrect, as later proven by numerous publications showing the lack of impact of lockdowns.

Atlas, Scott W.. A Plague Upon Our House: My Fight at the Trump White House to Stop COVID from Destroying America (pp. 162-163). Bombardier Books. Kindle Edition.

We do not need to get to a sophisticated assumption about modeling.  Atlas is being way too charitable by assuming that there was any “modeling” in the Birx method.  It is far more likely that she just looked at Worldomoter COVID numbers for Arizona and noticed that the case numbers were declining following the date of a mandate restricting bars & restaurants.  This was so simplistic and wrong it borders on magical thinking.

Below is a graph of interventions plotted against reported COVID cases in Arizona from Johns Hopkins.   (That JHU site conveniently shows the timing of every intervention in every state and illustrates the fact that NONE of them affected the expected regional case curve in each.) 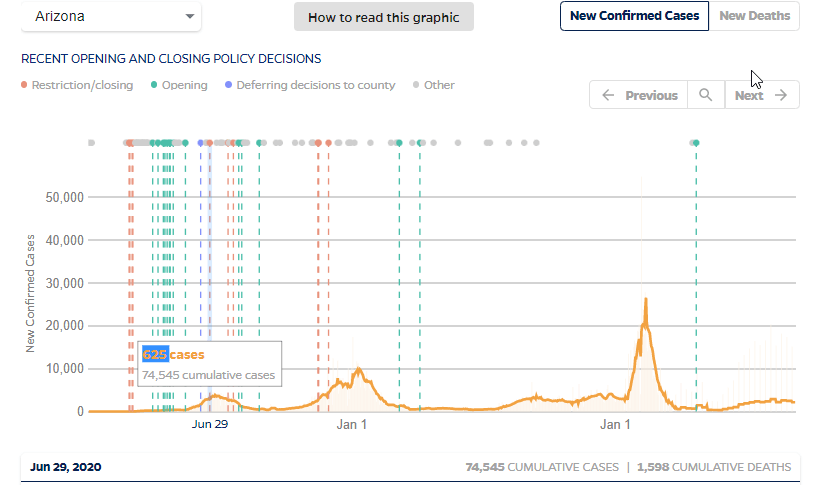 The bar & restaurant restrictions went into effect on June 29 and Birx attributed the back end of the June-July curve to the policy.

But California imposed restaurant closures beginning in March and yet there was still a case surge at the same time as Arizona.  In fact, the near-identical curve at almost the exact time occurred across the entire southern tier of the USA regardless of policy: 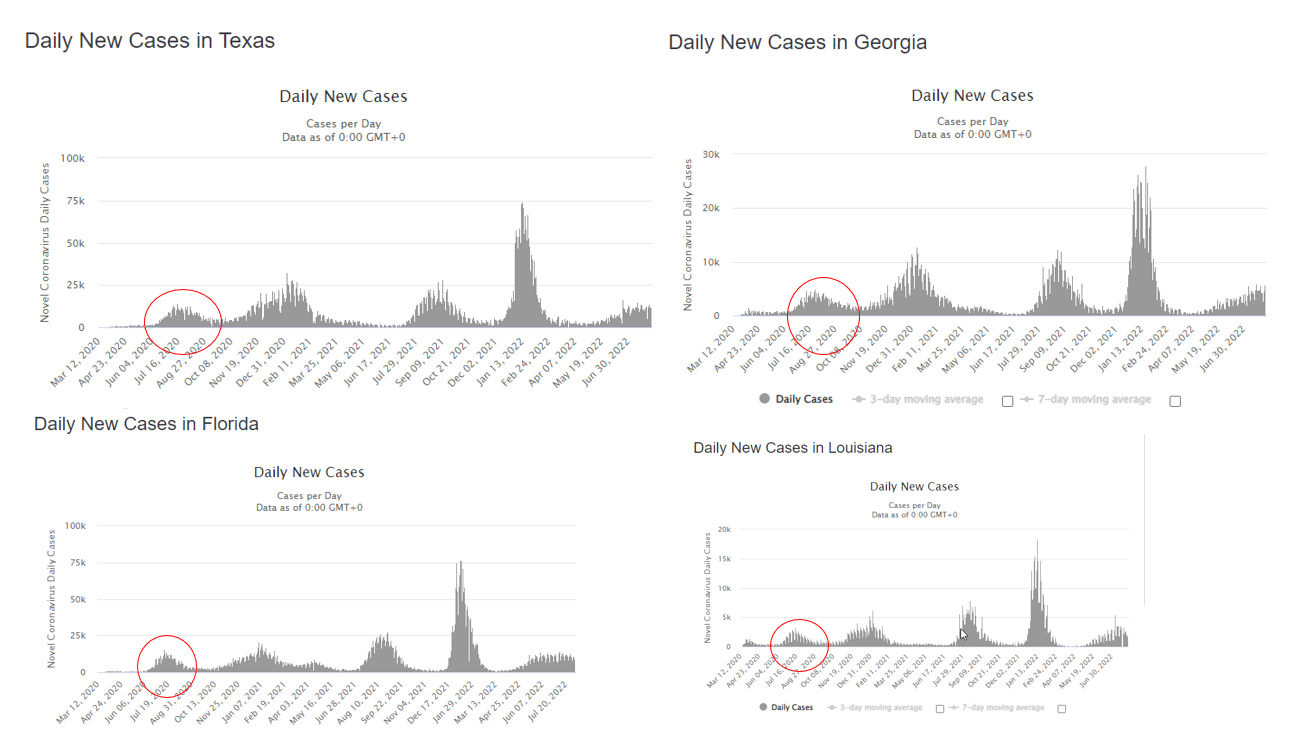 This Arizona data debacle is only a sample of the deep stupid that determined American COVID policy.  How is it possible that the nation’s top federal health authorities could be that oblivious to the actual data of the pandemic?  Why didn’t the rank and file of all of the relevant professions express shock and embarrassment that Birx claimed to speak for The Science?

This nonsense with the Arizona data, this kind of brain-dead “confirmation” of utterly useless, costly policies instead of a course correction cost the American people billions of dollars and millions of lost life-years.  If a part-time COVID observer posting on Ricochet among others can find these basic patterns (no heavy math involved) how is it possible that Dr. Birx did not have access to the science or the assistance and guidance of those who did?

She was not alone in this professional malpractice.

On July 7, 2020 before the Senate, Dr. Fauci was asked by Sen. Rand Paul whether the drop in cases in New York by the end of April indicated something positive like the beginnings of herd immunity.  Fauci sneered and said “Only you would believe that 22% could result in herd immunity.”  [It is unclear where Fauci got 22% as an infection rate.  As of that hearing date, the reported infection rate was about 2.15% of the NY state population.  Did he just multiply by ten to account for asymptomatic cases?]  But then Fauci went on to claim that the drop was due to the Governor of NY and mayor of NYC assiduously following CDC guidelines, an utterly preposterous claim given that the entire NE United States and Western Europe experienced identical patterns despite very disparate policies (God bless Sweden!).  Fauci either never grasped (or conveniently lied about) the reality of seasonality.  Attributing the backside of that curve to any intervention was complete nonsense.

March 29, 2021, CDC Director Rachel Wallensky says that she has a sense of “impending doom” at a time when the larger case curve was on the downswing.  A full year into the pandemic with almost metronomic regional data patterns in place, Ms. Wallensky was clearly still operating under the Ferguson potential maximum doom model.  Imagine how much more public confidence the CDC could have inspired by using rather obvious seasonality patterns to predict regional peaks two weeks in advance which was entirely possible throughout the first year and half of the pandemic?  And how can it possibly serve the public interest to use the phrase “impending doom”?

September 2020.  Then CDC chief Robert Redfield:  “These face masks are the most important, powerful public health tool we have. And I will continue to appeal for all Americans, all individuals in our country, to embrace these face coverings,” Redfield said to the Senate committee. “I’ve said if we did it for 6, 8, 10, 12 weeks, we’d bring this pandemic under control.”  The existing science and random controlled trials of mask use with past respiratory pandemics expressly refute Redfield’s claim.  Comparison of countries and states with radically different mask policies but near-identical results forever negates this theory.  Scott Atlas describes Redfield as contributing almost nothing in White House task force meetings, occasionally offering a Worldometer printout to make an irrelevant point.  Even the MSM could not cover for him when he claimed in a televised interview that masks would be better than vaccines at curbing the pandemic.  He also publicly missed the likely availability date for vaccines by six months when it was already known when they would be out.  And that guy was in charge of the CDC at a time when we desperately needed someone competent.

America had complete buffoons in charge of a vital mission.  Worse, an incentive structure to double down on stupid quickly emerged.  Scott Atlas and the Great Barrington Declaration signers were right about the likely failure of general suppressing strategies and about the need to shift protective focus to the vulnerable.  And yet they became the alleged science “deniers” and the ridiculous Fauci and Birx are still lauded when they deserve to be universally reviled. Deep Stupid is upon us.