“Never attribute to conspiracy that which can be adequately explained by stupidity.” — Hanlon’s Razor

The systemic damage done to the world’s democracies during the COVID-19 pandemic was so great that it is tempting to imagine the hidden hand of powerful figures orchestrating the Great Reset.  The horrifically costly NPIs were so obviously futile that there had to be deliberate organized malice at work to suppress the statistically obvious need to change policy.

There was indeed malice but not of Bond villain caliber.  In reality, we put morons in charge and when their failures became evident, they and their moron-adjacent allies in media and academia doubled down and attacked and silenced dissidents. The Great Reset was perhaps merely a secondary infection. 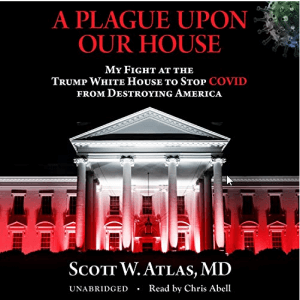 In his depressing account of his time on the White House COVID task force, Scott Atlas describes weeks and months of utterly pointless meetings over which the incomparably mediocre Dr. Deborah Birx presided.  She had a penchant for meaningless statistics and like Anthony Fauci and CDC Robert Redfield, she never seemed to notice the rather pronounced regional case curves and continued to attribute increasing numbers to a failure to implement NPIs and any declines as proof of policy success.

Unlike anyone else involved, Atlas kept bringing actual data and studies to these meetings.  He repeatedly made the point that lockdowns and school closures have horrific costs and do not address the real problem of protecting a well-defined vulnerable population. The needle never moved.

After quite some time, he organized a heavyweight panel of actual experts which panel was repeatedly stalled before finally getting to speak to Trump.  And their message (the eminently sane recommendations of the Great Barrington Declaration) was somehow reported in the media as a “let ‘er rip until herd immunity” plan—Trump advisors want us to die!

This panel was not proposed until the September before the election so (a) it was rather late in the game and (b) was thus always going to be turned into a partisan football no matter how much distortion was required to do so.  Lots of people who knew better viciously piled on the Harvard, Stanford, Oxford all-start team Atlas assembled because the choice had been reduced to “the science” or Trump.  The moron-adjacent social media, major news outlets, and campus hive mind framed the issue in terms that made the morons seem like responsible actors.

[By the way, Gov. DeSantis gets rave reviews from Atlas because, unlike so many others, DeSantis got into the weeds on facts and numbers and was able to discuss them and implement policies accordingly.  Despite an enormous elderly population, Florida’s senior death rate remains lower than most states likely because of a particular focus on their protection rather than futile general suppression mandates.]

Mike Pence oversaw the task force and was not inclined to buck Birx.  His inertial instincts failed the country but he reasonably feared the media-driven political blowback from dumping someone many in the White House already knew was an idiot. They still got hammered on the COVID issue anyway and lost the election largely because of it.

You get the impression from Atlas that Trump had better instincts about the futility of the lockdown/closure approach than Pence but overall the administration (and Kushner) was afraid of being accused of turning against “the science” and thus stand accused of endangering lives.  So morons still called the shots to the virtual end of the Trump Administration and still do.

The terrifying takeaway from Atlas’ book is that American COVID policy was never the result of a well-grounded good-faith, empirically disciplined policy debate.  It was simply the inertial byproduct of incredibly mediocre people placed in charge of policy.  How is it possible that a collection of vaguely malignant buffoons could have so much unchecked authority and power in a developed democracy?

On Ricochet, we were discussing COVID “seasonality” using actual data as early as the summer of 2020.  Atlas describes being stunned that in mid-2021, the head of the CDC held up a Worldometer graph from a single state and opined that this proved masks worked.  Even the lay political members of the task force realized that this was nonsense. Redfield was clearly clueless about the form and regularity of regional COVID case waves, regardless of policy differences within the region.  How can that be?  I can identify at least ten people on Ricochet who appear to have done more detailed work on COVID policy than the trio that ran the national policy:  Birx, Fauci, and Redfield.  Even when we disagree, people here provide links to papers and numbers.

Collins is the head of NIH, the premier medical research institution in the USA and he is not only flat wrong about the science behind the Great Barrington Declaration but offers the weirdly vicious notion that these prominent scientists are “fringe” types who need to be “taken down?!”

Presumably, the distinguished Dr. Fauci would respond to this email with a number of key studies at his fingertips given that he is a major architect of the national strategy and personally represents and speaks for science itself: 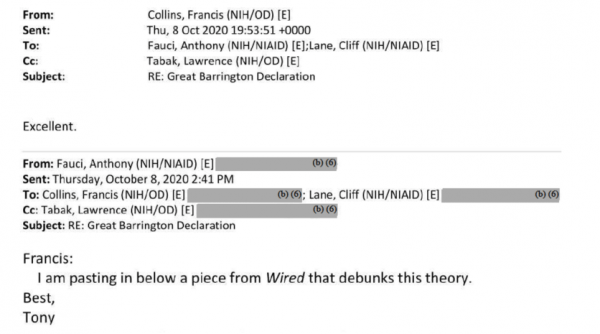 A cite from a junk piece in Wired!  This is the level of exchange by the great minds running national health policy! But if that wasn’t persuasive enough, in follow-up emails Fauci later links to The Nation and an article in the WaPo quoting–Fauci. [More on this at Brownstone.]

That was around the same time Redfield went on TV and said masks provided more protection for the elderly than vaccines and spewed venom about the Atlas/Great Barrington view of COVID with additional misstatements.

If you ever clicked on a link provided in a COVID post on Ricochet, there is a good chance you’ve done more substantive research than the buffoons who destroyed so much wealth, so much serenity and so many lives to the continued praise from lazy idiots who claim to be professional journalists.

Could people that mediocre ever concoct an actual conspiracy to bring down western civilization or is it the sheer weight of pure stupid that has brought us to this state of affairs? Be afraid either way.