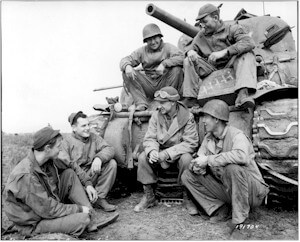 Ernie Pyle was born 122 years ago Wednesday, on August 3, 1900, in Dana, Indiana. He died not quite 45 years later, on April 18, 1945, in the Iejima Okinawa Prefecture of the Empire of Japan, killed in action while doing what he loved.

Having missed out on his first ambition–to serve in World War I–he undertook the study of journalism at Indiana University, and eventually found a career at Scripps-Howard, where his “everyman” story-telling style became his trademark for the next twenty years.

Eventually, Pyle found himself in London covering the Battle of Britain and subsequently spent time in North Africa, Italy, and Normandy.  He then spent some time recovering from “combat stress,” before traveling to the Pacific Theater in 1945 where he was–while covering the Okinawa invasion–killed in action. From the contemporary New York Times article. (Forget the source.  That was then. It’s a good read.  Trust me):

Ernie Pyle died today on Ie Island, just west of Okinawa, like so many of the doughboys he had written about. The nationally known war correspondent was killed instantly by Japanese machine-gun fire.

The slight, graying newspaper man, chronicler of the average American soldier’s daily round, in and out of foxholes in many war theatres, had gone forward early this morning to observe the advance of a well-known division of the Twenty-fourth Army Corps.

…The commanding general of the troops on the island reported the death to headquarters as follows:

“I regret to report that War Correspondent Ernie Pyle, who made such a great contribution to the morale of our foot soldier, was killed in the battle of Ie Shima today.”

Some quotes from Ernie Pyle:

All the rest of us—you and me and even the thousands of soldiers behind the lines in Africa—we wanted terribly yet only academically for the war to be over. The front-line soldier wanted it to be terminated by the physical process of his destroying enough Germans to end it. He was truly at war. The rest of us, no matter how hard we worked, were not. Say what you will, nothing can make a complete soldier except battle experience.

They were young men, but the grime and whiskers and exhaustion made them look middle-aged. In their eyes as they passed was no hatred, no excitement, no despair, no tonic of their victory—there was just the simple expression of being there as if they had been there doing that forever, and nothing else.

Our soldiers are still just as roughly good-humored as they always were, and they laugh easily, although there isn’t as much to laugh about as there used to be.

The most vivid change was the casual and workshop manner in which they talked about killing. They had made the psychological transition from their normal belief that taking human life was sinful, over to a new professional outlook where killing was a craft. No longer was there anything morally wrong about killing. In fact, it was an admirable thing.

Our men can’t make this change from normal civilians into warriors and remain the same people. Even if they were away from you this long under normal circumstances, the mere process of maturing would change them, and they would not come home just as you knew them. Add to that the abnormal world they have been plunged into, the new philosophies they have had to assume or perish inwardly, the horrors and delights and strange wonderful things they have experienced, and they are bound to be different people from those you sent away.

A soldier who has been a long time in the line does have a ‘look’ in his eyes that anyone who knows about it can discern. It’s a look of dullness, eyes that look without seeing, eyes that see without conveying any image to the mind. It’s a look that is the display room for what lies behind it—exhaustion, lack of sleep, tension for too long, weariness that is too great, fear beyond fear, misery to the point of numbness, a look of surpassing indifference to anything anybody can do. It’s a look I dread to see on men.

They seemed terribly pathetic to me. They weren’t warriors. They were American boys who by mere chance of fate had wound up with guns in their hands, sneaking up a death-laden street in a strange and shattered city in a faraway country in a driving rain. They were afraid, but it was beyond their power to quit. … And even though they weren’t warriors born to the kill, they won their battles. That’s the point.

I think Harry Truman was right.  Ernie Pyle deserves the gratitude of all his countrymen for telling the truth.  And for exposing the price of war on the young men who fought it.

PS: The photo accompanying this post is a public domain image of Ernie Pyle with the US Army’s 191st Tank Battalion, at Anzio.

Published in Group Writing
Tags: quote of the day august 2022