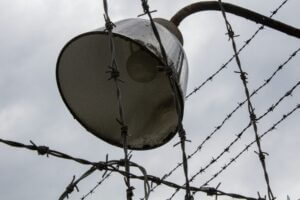 One only needs to look at modern history to recognize that attacks against the Jews persisted through the centuries with little resistance from the Jews themselves. During World War II, there were pockets of rebellion, but Jews mainly lined up like lambs heading for the slaughter. Depending on the country and times, Jews were desperate to fit in with the societies in which they lived, sacrificing their beliefs, their knowledge of history, and even their common sense to deny imminent dangers. Until the country of Israel was established, with its heroism and demands for survival, the Jews lived in denial. And yet the seeds for survival may have been planted as a result of the Warsaw ghetto revolt.

Warsaw, Poland, was no exception to the rounding up and imprisoning of Jews. As they had often demonstrated, the Jews complied with the efforts of the Nazis to detain them:

Shortly after the German invasion of Poland in September 1939, more than 400,000 Jews in Warsaw, the capital city, were confined to an area of the city that was little more than 1 square mile.

In November 1940, this Jewish ghetto was sealed off by brick walls, barbed wire and armed guards, and anyone caught leaving was shot on sight. The Nazis controlled the amount of food that was brought into the ghetto, and disease and starvation killed thousands each month.

Similar Jewish ghettos were established in cities throughout Nazi-occupied Eastern Europe during World War II. The Warsaw ghetto was the largest in Poland.

When Heinrich Himmler decided to “resettle” the Jews to the extermination camps, the Jews finally realized, based on other information that had reached them, that they were certain to die.

It was finally time to fight back. Their resistance didn’t emerge just from the desire to be free of the Nazis, but from a commitment to their very survival. After many of the Jews were deported, those remaining fought back:

An estimated 55,000 to 60,000 Jews remained in the Warsaw ghetto, and small groups of these survivors formed underground self-defense units such as the Jewish Combat Organization, or ZOB, which managed to smuggle in a limited supply of weapons from anti-Nazi Poles, and the Jewish Military Union.

On January 18, 1943, when the Nazis entered the ghetto to prepare a group for transfer to a camp, a ZOB unit ambushed them. Fighting lasted for several days before the Germans withdrew. Afterward, the Nazis suspended deportations from the Warsaw ghetto for the next few months.

By May 16, the ghetto was firmly under Nazi control, and on that day, in a symbolic act, the Germans blew up Warsaw’s Great Synagogue.

An estimated 7,000 Jews perished during the Warsaw ghetto uprising, while nearly 50,000 others who survived were sent to extermination or labor camps.

Are we living in times different from the Jews in WWII? Do we take our freedom for granted? Are we so determined to “fit in” that we won’t fight back when we see our way of life being threatened? Do we assume that if we comply with the demands of the radical Left, somehow everything will work out? Or do we think it is a temporary blip in the threats to our values, freedoms, and beliefs?

The 21st century may be the first real threat to maintaining the American way of life. How long are we willing to watch and wait until we realize that the Left is prepared to detain us, too?