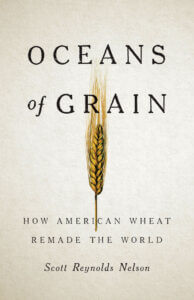 Do empires build trade routes or do trade routes build empires? Have the United States and Russia been locked in an economic rivalry since the 1860s? Was World War I triggered by international grain trade and the desire of Russia to control Constantinople?

“Oceans of Grain: How American Wheat Remade the World,” by Scott Reynolds Nelson, examines these questions and much more. It is a study of grain, its trade routes, and the impact grain trading has had throughout history. Bread is the staff of life. Nelson follows it from prehistory to the present.

Nelson’s theme is simple: food production drives history. Abundance or absence creates or destroys empires, fuels economic and technological growth, and drives world history. Grain is the most important food. Storable and transportable, it can also be used to create more food, especially meat. The two biggest breadbaskets are the Ukrainian and US plains. There were others, but none as productive.

Nelson opens by showing how trading Ukrainian grain predated civilization, following oxcart trails across the Ukrainian steppes. Disease also followed these trails. Grain trading led to cities, which required food. Empires grew to ensure grain flowed. This led to bigger cities. These grew until reset by plague. The cycle then repeated itself. This pattern was followed from ancient Greece to Catherine the Great’s Russia. Russia grew rich exporting its grain to Western Europe starting in the eighteenth century.

Nelson also shows how the growth of the US affected this cycle. It produced a source of grain rivaling and surpassing the production of the Russian plains. America was more productive not just because of its soil, but because its free-market economy encouraged innovation and productivity. Following the Civil War, the US powered past Russia. Despite the longer supply chain, its grain was cheaper.

“Oceans of Grain” is provocative. Well-researched and readable, Nelson has written a book that will fascinate both professional historians and ordinary readers.

This review was written by Mark Lardas who writes at Ricochet as Seawriter. Mark Lardas, an engineer, freelance writer, historian, and model-maker, lives in League City, TX. His website is marklardas.com. This review appeared in a different form in American Essence magazine and Epoch Times.