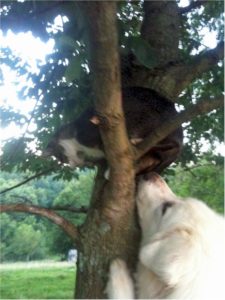 She is, indeed, my Warrior Princess.  Eleven years old today.  And a survivor.

She was born on June 17, 2011, and–as a Great Pyrenees puppy–somehow ended up living in an apartment in center-city Philadelphia PA.  God knows why.  Or how.  GPs are not–as a rule–high-energy dogs, and they can do quite well without an extensive running range, but, Lord.  They’re big dogs.  And they shed like mad.  And they really do love the outdoors.

There’s no doubt that her first set of human parents–at least the woman, from whom I had an actual report–really loved her.  And yet.  The man and the woman got divorced.

And neither of them–in their new lives–wanted Xena.  How much could this woman have actually loved her, then?  Not so much, I guess.

So they surrendered her to a giant breed rescue organization.  Something for which I’ll always be grateful.  And in August 2012, when she was about 14 months old, I sought her out as a companion for Levi.  A perfect fit.

She was a few hundred miles away, on the other side of the state, and the magical network of animal rescue nuts went into action–driving her 50 miles or so to the next drop-off point, then to the next, and the next, and the next.  Until finally, it was my turn.  And I picked her up. (I’ve participated in the same sort of thing WRT rabbit adoptions, the organization of which is called the Bunderground Railroad.)

Xena came with a personal note from her mom, explaining how much she liked to go for walks in the park where she would chase the bunnies and the squirrels, and any other animals that moved.

Crimenutely.  I had sheep.  And goats.  “Chasing” was not even remotely acceptable.

Cue six months of deprogramming.  Walking her around the fence and the farm perimeter every day on a leash.  Restraining her from chasing anything.  At the end of which, and when I finally trusted her not to go bat-guano insane, I let her off the leash and discovered that she had all the ‘guarding’ instincts that Levi lacked.  In fact, she’d gently round up the sheep, put them into the barn, and then refuse to let them out.  At all.

More deprogramming.  Until we finally got to an acceptable compromise. That was slightly more than nine years ago, and for the last ten years she’s been a part of the wallpaper here, contentedly declining into decrepitude like me, with the occasional necessary medical adjustments.  Almost five years ago, she had (back) knee replacement surgery. A few months ago she had some small tumors taken off her eyelids.  And yet she persists. (If only she would let me cut her toenails without having to have general anesthesia first….)

Six months ago, she lost her best friend in the world when I had to have Levi put to sleep.  She noticed, and she was lost.

But.  Odo!  A nine-week-old puppy who appeared in mid-February, gave her a bit of a new lease on life.  He loves her.  She keeps him in line, and has taught him the rules of the Farm.  (There was a bit of a scuffle a few weeks ago, over a bone.  One which I had to break up with the business end of a shovel, and one in which the old lady gave the young whippersnapper a bloody ear….). 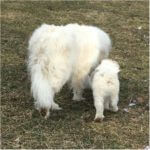 But, when I put them out in the morning, he always rushes out the door first, and then he sits on the stoop and waits till she rouses herself, turns herself around, figures out which end is up, and wanders out to join him.

She’s getting more-and-more addled as the days go on.  (I can relate.)  And, these days, she likes nothing more than to scrabble around in the garden for a bit, dig up one or two of my precious flowers, make herself a nice cool spot in the dirt, and lie down and go to sleep.

Happy birthday, darling girl.  I don’t expect there’ll be many more (the veterinarian told me, on Levi’s last day, that to have kept two Great Pyrenees into double digits is quite an achievement), but I’ll cherish every one. 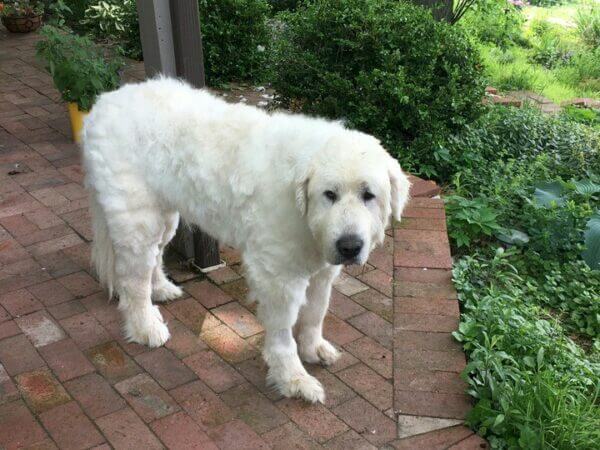