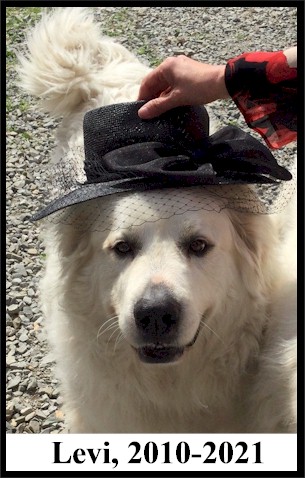 He was the biggest — in every sense of the word — dog who’s ever owned me. Big of size, big (well, reasonably big) of brain, big of spirit, but most of all, big of heart.

Levi’s long, and very good, run came to an end this morning.  He’d been having increasing trouble hauling his 150-pound frame to its feet, requiring me to give his back legs a boost several times a day.  Once he was up and at ’em though, he could still get around, could go outside, could find his way to the food and water bowl, and seemed quite content. He was amusing to watch, and not always cooperative in my attempts to help him navigate his nemesis — a step of any sort. (Stairs have been completely out of the question for a couple of years.) I spent weeks chivvying him up and down a ramp I bought years ago to expedite his entry into the back of the car (he always hated car rides), which I laid at the base of the back door, which has a single step up into the house.

Levi was fascinated by this, and very grateful. He’d walk all the way (on the ground) to the door and stand there waiting to be let in, inspecting and drooling over the top of the ramp that he couldn’t step onto because it was at the same height as the step itself (which he couldn’t get onto either). Since he hadn’t gone well in reverse for a very long time, turning him around, leading him back to the start of the ramp, and then — basically — shoving him up and along it while he dug in his heels was quite a performance. Eventually, though, he did get the hang of it, and it solved the problem for a few months.

He’d rely on momentum to take him where he wanted to go, starting out slow and building up speed. And he’d often follow a circuitous and lengthy path to get there, reminding me of how bees navigate their way back to the hive by means and routes unfathomable to our own senses. So: Sleeping on the bedroom floor, wants to go out. Discovers he’s stuck and needs a boost. Barks. His personal maid shows up and hikes his back end up. He walks to the other end of the bedroom, takes a running start at the very shallow step that he can just about navigate, and goes up it. Then he can’t stop, so he keeps going forward to almost the other end of the house, by which time he’s slowed himself enough to turn around and follow the same path back to the door, where he goes out and down the ramp. My job, once I’ve hauled him to his feet, is to get to the outside door before he does, and make sure it’s open when he gets there. Because if it’s not, he’ll crash into it or try and jam himself through the sliver of opening as I’m trying to get it ajar. That never ends well.

The last time I got a really good belly laugh out of 98-year-old Auntie Pat was when I told her this story and said that it was foolish to stand in Levi’s way, because he’d roll right over you — just like (Pat’s older sister) Auntie Issy, a formidable lady who — like most of my family — wasn’t easily put off the scent, once she’d set her mind to something. Pat knew immediately what I meant. Hilarity, and a few shared memories, ensued.

I’ve written about Levi many times on Ricochet. Here, from July 2017, is the story of how Levi came to live with us: 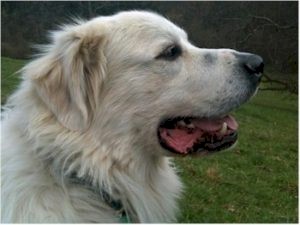 Levi came to us at the age of about fifteen months, in the fall of 2011 (it’s his birthday today). He’d been arrested and court-martialed at the farm up the road, and dishonorably discharged from service for, among other infractions: insubordination, sleeping on duty, loafing, several attendance related offenses, and repeatedly deserting his post. Since our farm was the one he’d deserted his post for, over and over again, his CO simply gave him to us (the penalties for such offenses for four-legged grunts being less severe, it appears than those for their two-legged counterparts. In fact, if you asked Levi, he’d probably say he made out like a bandit on the deal.)

He is completely hopeless as a guard dog (for the sheep, that’s what the breed is bred for). He’s afraid of loud noises, gunshots, and thunderstorms, and his preferred method of dealing with them is to hotfoot it into the bathroom, slam the door behind him, lie across it so that no-one and nothing can get in, and wait it out in the dark. He makes up for these considerable deficiencies, though, by loving me more than any other being on the face of the earth, and by gazing adoringly at me whenever I appear. I can put up with a lot, if that’s the return on my investment. And it is.

From the summer of 2019, describing one of our annual rituals (the photo is from five minutes after I finished, by which time Levi had found a pile of dirt and rolled in it): 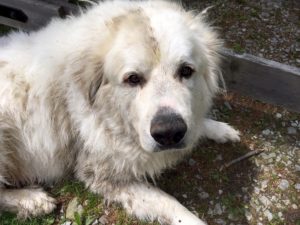 So, today was the day. It was 80 degrees here in my little corner of SW Pennsylvania. Rain, starting tomorrow, and as far as the eye can see. Today. Do or die. Bathe or bust.

Let me explain: The two Great Pyrenees, Levi and Xena, are on the same sort of bath schedule as Queen Elizabeth I of England, they get one twice a year, whether they need it or not. And it was time.

Lord, they hate it. At about 325 lbs the pair, it’s an ordeal. Not that they’re nasty. They’re never nasty. What they are is passive aggressive. Both of them. What their body language says is something like “OK. I’ll stand here. If I must. But I’m going to make it as difficult for you as possible. And I’m not going to cooperate at all.”

I thought I’d seen every example of the passive-aggressive technique during my two years as a moderator on Ricochet. But I was wrong. Levi and Xena are experts. They wrote the book. We could all learn from them.

He’s bright, affable and affectionate. He’s still not down with living in the barn and guarding the sheep (I think he finds their conversation dull, repetitive, and beneath him). He doesn’t like very hot weather. He doesn’t like very cold weather. He doesn’t like red, or white, pickup trucks. He really doesn’t like thunder, or guns firing, and when he hears them he hides in the bathroom and closes the door with his nose. (In fact, he’s a better meteorological prognosticator than the guys and gals on the Weather Channel. Thirty minutes before the thunder starts, without fail, Levi heads for the high ground, closes the door, and wedges himself between the washing machine and the sink. You could make money betting on him. Don’t try that with weather.com, whose forecasts, as they relate to reality, often contain an element of surprise).

Because of his myriad failures to conform to breed standard, we’ve speculated as to whether he’s been misclassified. If he is, in fact, a breed of one. Maybe he’s a “Lesser Pyrenees.” Or perhaps a “Not-So-Great Pyrenees.”

For the more than 10 years that he lived, first with Mr. She and me, and for the past 16 months just with me, his affection never wavered, and in return, I promised I’d see it through with him till the end.

And this morning, it came, and I did. His hind legs went completely, and he could barely stand, even after I attached a harness and tried to steady him. Taking even a small step was virtually impossible. He was trembling in fear. He could not have lived like that, and I could not have watched him die like that. And so I called the vet.

He’s being cremated. Normally, I dig a hole and bury them on the farm, but my backhoe is leaking hydraulic fluid from an important place at the moment, and so that option is off the table. I’ll scatter his ashes among the flowers and bushes, on the farm he loved so much (where the nice lady hid him from the thunder and gunfire), and I’ll miss him like stink. I’ll especially miss his snoring. He snored like a warthog. Loudly and wetly.

Goodbye for now, my very special doggie. See you on the other side. 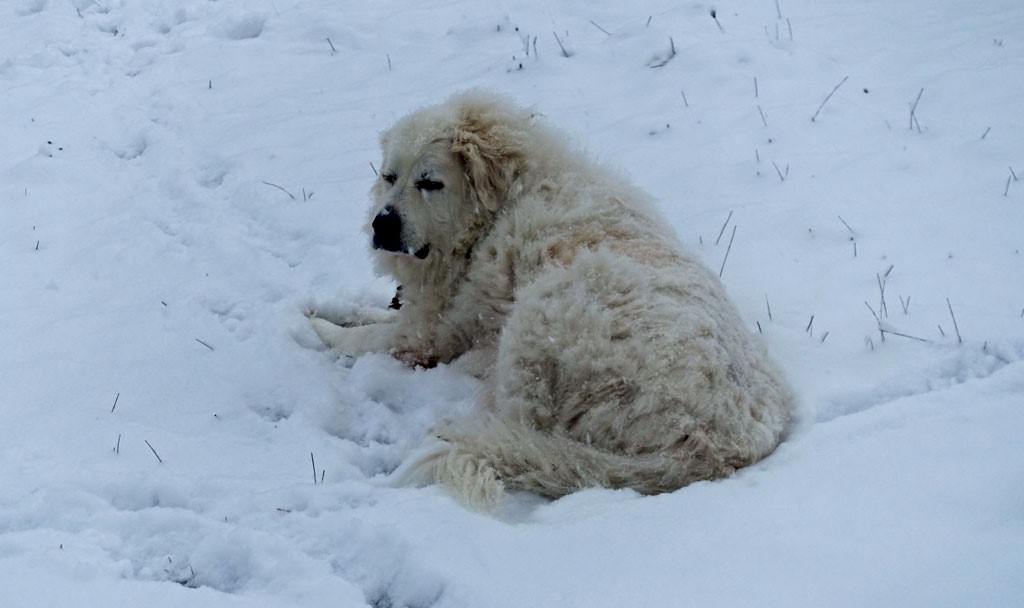 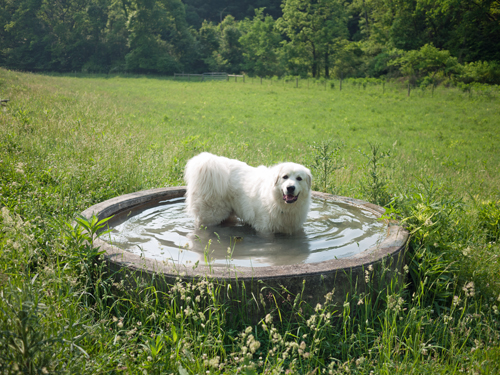 I do believe the following photo is the only extant, deliberate selfie of me on the planet. Levi’s the one on my right, your left: 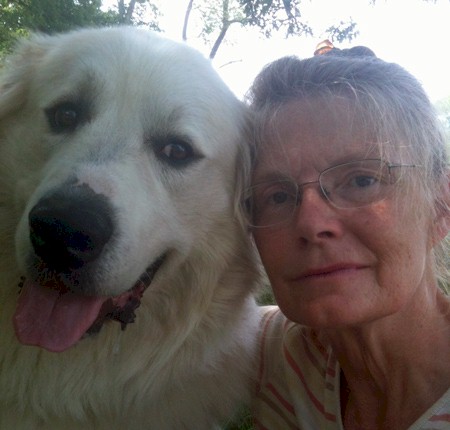 When the body that lived at your single will,
With its whimper of welcome, is stilled (how still!).
When the spirit that answered your every mood
Is gone—wherever it goes—for good,
You will discover how much you care,
And will give your heart to a dog to tear — Rudyard Kipling, “The Power of the Dog”

Published in General
Ricochet editors have scheduled this post to be promoted to the Main Feed at 8:53AM (PT) on December 15th, 2021.