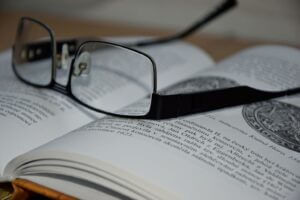 I scored 126th out of 126 students.  When I was a junior in high school, our class took a test for a possible college-level English curriculum in our senior year. Having been told the results, I sat sobbing on my bedroom floor. For some reason, grammatical prowess in my mother tongue eluded me. Syntax seemed like “sin tax” to me.

And grammar was the first of three levels in the senior curriculum. I had to pass out of one level to get to the next two: essay writing, then free writing. I had been behind the door when grammar was taught in middle school. Somewhere, somehow, I missed lessons on prepositional phrases, split infinitives, and hanging gerunds. I tried and tried to pass through to the next level. No amount of tutelage helped. I languished in the wasteland of grammatical incoherence.

But the thing was, I could write. I knew instinctively what sounded right. I heard the words even if I didn’t understand how they fit together. And Roy Honeywell knew it.

Roy Honeywell had been my junior English teacher. He knew what I could do. “I would like to read a paper from someone in the class whose writing could be an example to others. He shall remain nameless,” Mr. Honeywell intoned as he read my papers during 11th grade not once, not twice, but three times.

Now Roy Honeywell was the dual-credit, college-prep teacher in my senior year. He agonized with me as he tried to fill my grammatical knowledge gaps. I took and failed test after test. We were a month into the senior year. Everyone else had matriculated to levels two and three. I was the only one who could not pass the grammar section of the program.

The overwhelming feelings of failure touch me even today. I can feel now, what I felt then. The emotional slough I wallowed in then is the swamp I see before me every day.

But the feeling of clandestine secrecy from what happened next lies just beyond the swamp. Roy Honeywell knew what I could do. He knew I could write. So, one day he came to my desk and told me that I did not have to pass the grammar exam. I could proceed to level two.

“This is just between me and you,” he stated in firm, hushed tones. “You show me that you can write like I know you can, and the grammatical understanding will follow. I have faith in you.” And he walked away.

I did not know what would happen next, but he did. After scoring 126 out of 126, it was not long before my writing scores ranked at the top of the class. I knew I was doing well when Mr. Honeywell began to anonymously read my papers before the class again. I will never forget when he cast a quick, smiling glance in my direction before he began to read my writing.

“I have faith in you.” The words still inspire me today. Roy Honeywell gave me a chance. I have been giving students, like you, a chance, ever since. For Truth in Two, this is Dr. Mark Eckel, president of the Comenius Institute, personally grateful for second chances.