With Florida’s “Don’t Say Gay” law (which has nothing to do with saying “gay,” oddly enough) and all of the disproportionate hand-wringing, mud-slinging, and poo-flinging for all to see, I have come to wonder why we let schools have sex education anyway.

It is possible that this will mark me (yet again!) as some sort of dinosaur.  But follow me here.  What was the original purpose of sexual education?  If you ask Planned Parenthood, it is to promote sexual health and wellness.  If you ask others, it is to promote awareness of the body, reproductive functions, and to limit negative behaviors that result in unwanted pregnancies and STIs.  If you ask even more people, they’ll tell you that it is to teach healthy sexuality and promote monogamy.  Everyone has their own definition and purpose of what it is.  Newsweek even had an article on the history of sexual education in the US starting from the 1920s onward. 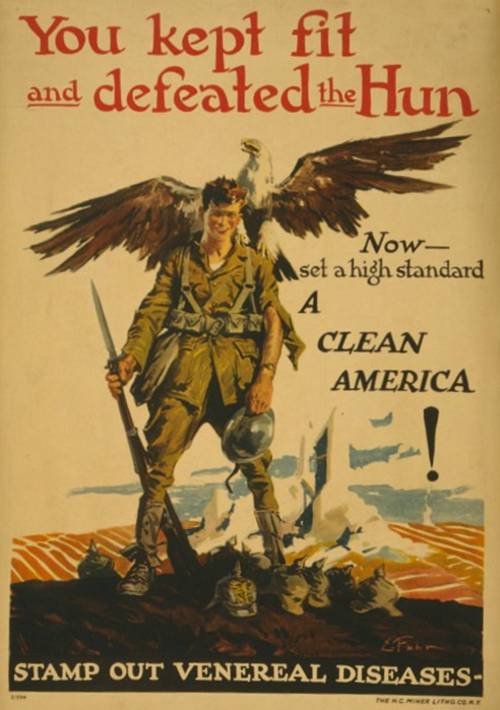 History indicates that we had sexual education for various reasons, but mostly our national compulsory education began with, who else, the military.  Men are notorious for their desires, particularly when away at war.  Everyone remembers those delightful posters from the WW eras.

When our men came back from WW1, the US started educating earnestly.  People had moved from farms, where procreating was a fact of life and very much available to be seen in any yard, to the more compartmentalized life of the cities.  This shift was a move away from agrarian society and into cosmopolitan graces.  Girls no longer saw what happened in the yards.  They had to take it from their mothers, sisters, preachers, and husbands that what was going to happen on their wedding night was normal, permissible, and necessary.  Boys no longer saw it with their own eyes, but caught word from their friends and others who were just as like to spread tall tales as share real information.

The government decided it was in our best interest that we have an educated public.  Along with compulsory education, we began having sex ed.

The Newsweek article from 12 years ago, speaks to conservative opposition of sex ed in the 1960s and their fears:

Gordon Drake and James Hargis framed sex ed as communist indoctrination: “[If] the new morality is affirmed, our children will become easy targets for Marxism and other amoral, nihilistic philosophies—as well as V.D.!” Rumors spread that sex instructors were encouraging students to be homosexuals or even stripping and having sex in front of their classes.

Ironically, the article mocks conservatives and the religious right-wing as being alarmist.

Those who follow educational materials currently will laugh or shake their heads because that is literally what ended up happening.  The teachers are teaching Marxism and a number of nihilistic philosophies.  The sex education instructors were and are encouraging students to be homosexuals, queer, transgender, and to perform sexual activities precociously (though, not likely encouraging it in front of the class).

Without massive changes to the curriculum to emphasize psychological well-being, maturity, growth, consent, pleasure, and adult consequences (including mental/physical), I sincerely doubt that it will.  Parents must step up and talk about sexuality (age appropriately) before the schools.  The kids need to be able to recognize that the schools are not protecting them when these things are said.  The trust must already be built between parents so that the children can come home and ask questions and get real answers.

If I always have to undo this education, why are so many pushing for an expansion of it?

It is time to ask why.  Loudly and publicly.

Why do we still have Sex Ed when it does not and has never met the stated goals?