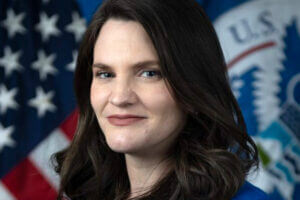 The Biden administration is creating a group to counter “disinformation” and “misinformation.” It will be led by a woman who repeatedly pushed both.

The Department of Homeland Security appointed Nina Jankowicz to head the group. Her previous job title was “disinformation fellow” at the Wilson Center, a title that seems a bit on the nose. While at Wilson, she frequently offered false narratives about Hunter Biden’s incriminating “laptop from hell” and Trump’s involvement with Russia. One might even call it misinformation.

On October 20, 2020, the AP interviewed Jankowicz who insisted the laptop was a non-story:

The actual origins of the emails are unclear. And disinformation experts say there are multiple red flags that raise doubts about [the email authenticity, including questions about whether the laptop actually belongs to Hunter Biden, said Nina Jankowicz, a fellow at the nonpartisan Wilson Center in Washington….

“We should view it as a Trump campaign product,” Jankowicz said.

Later that month, Jankowicz tweeted, “Back on the ‘laptop from hell,’ apparently—Biden notes 50 former natsec officials and 5 former CIA heads that believe the laptop is a Russian influence op.”

When that tweet resurfaced this week, she claimed: “For those who believe this tweet is a key to all my views, it is simply a direct quote from both candidates during the final presidential debate. If you look at my timeline, you will see I was livetweeting that evening.”

Back to October 2020. Jankowicz linked to a news article that cast “yet more doubt on the provenance of the NY Post’s Hunter Biden story.” She added, “Not to mention that the emails don’t need to be altered to be part of an influence campaign. Voters deserve that context, not a [fairy] tale about a laptop repair shop.”

She gushed over Christopher Steele, the man who pushed the debunked “Steele dossier” alleging Russian/Trump collusion. “Listened to this last night – Chris Steele (yes THAT Chris Steele) provides some great historical context about the evolution of disinfo,” Jankowicz tweeted in August 2020.

On Thursday, White House press secretary Jen Psaki was asked about Jankowicz’s ability to head the board. “I don’t have any comment on the laptop,” Psaki replied. “And I don’t know who this individual is, so I have no comment on that specifically.”

Jankowicz’s deceptions are bad enough but the very concept of government officials defining “truth” is dangerous if not malevolent.

Say it’s World War I and the Brits want to demoralize German soldiers. The allies drop leaflets on a Kraut trench saying the Kaiser is about to sue for peace. That is disinformation.

When a deceived German soldier credulously reads the bad info to his buddies, that is what’s usually meant by misinformation. (Technically, it’s both mis- and dif-, but illustrates the difference)

The working definition of both disagrees with the above. When Biden or a cable news anchor uses either term, it means “thing I don’t like.” The Chinese lab-leak theory was misinformation until Trump was well out of office. It was disinfo to claim the vaccine didn’t prevent Covid until the media couldn’t hide the fact any longer. Jankowicz herself claimed Hunter’s laptop was misinfo until it wasn’t.

Partisan actors pretend to defend truth but don’t even know what it is.

A confused Pontius Pilate famously asked Christ “what is truth?” Our current rulers are just as ignorant, as are the media and academia. The Stanford Encyclopedia of Philosophy spills 13,000 words giving various answers to that question, only leaving the reader more confused.

If the greatest minds in history couldn’t settle on a definition, I doubt Joe Biden will be the first. Even sincere folks without an agenda won’t agree on what they think is true, let alone define truth itself. But the left definitely has an agenda.

Biologically, only two genders exist, one with XY chromosomes and one with XX. That is a fact, repeatedly proven by science, philosophy, theology, tradition, and history. It still will be tagged “misinformation” because the left doesn’t like it. Instead, they will describe 57 genders as “fact,” at least until they’re told there are 63 or 86. Then, they only need to update the Newspeak Dictionary and the lie becomes the officially approved “truth.”

The AP Stylebook has done this for years. Earlier this month, Stylebook editor Paula Froke announced numerous additions and updates to the bible of journalism. “Among the changes she announced were a new inclusive storytelling chapter, plus updates and expansions covering disabilities; race-related coverage; gender, sex and sexual orientation; pronouns; and religion,” their blog post stated.

Last year’s update shows just how flighty and arbitrary “truth” is to the media:

Since the most recent print edition, the AP decided to capitalize Black, but advises using an individual’s identity, if known. (Froke said that while “white” remains lowercase when used as a racial identifier, “that’s subject to further discussion down the road.”) The stylebook now capitalizes “Indigenous.” Of “brown” as an identifying label, it says, “Avoid this broad and imprecise term in racial, ethnic or cultural references” because “Interpretations of what the term includes vary widely.” “People of color” is acceptable in “broad references to multiple races other than white,” the stylebook advises, though many people object to the term in part because it “lumps together into one monolithic group anyone who isn’t white.” And it advises, as so many entries now do, to “Be specific whenever possible.”

I guarantee the above paragraph will be tagged “misinformation” in a few years when all the terms have changed yet again. The 55 previous editions of the stylebook will be memory-holed; Newspeak has evolved.

Biden’s Ministry of Truth will be far less powerful than the one described by George Orwell in Nineteen Eighty-Four, at least at the start. But the goal is similar. As Orwell wrote, “Don’t you see that the whole aim of Newspeak is to narrow the range of thought? In the end we shall make thoughtcrime literally impossible, because there will be no words in which to express it.”

He described this more clearly later in the novel:

In the end, the Party would announce that two and two made five, and you would have to believe it. It was inevitable that they should make that claim sooner or later: the logic of their position demanded it. Not merely the validity of experience, but the very existence of external reality, was tacitly denied by their philosophy. The heresy of heresies was common sense. And what was terrifying was not that they would kill you for thinking otherwise, but that they might be right. For, after all, how do we know that two and two make four? Or that the force of gravity works? Or that the past is unchangeable? If both the past and the external world exist only in the mind, and if the mind itself is controllable—what then?

Orwell had a limited imagination. Today, one plus one makes 57.

Nina Jankowicz’s job isn’t to root out misinformation or disinformation. It is to call common-sense “lies” and replace it with ever more complex deceptions. Politicians, academia, and the media can’t define “truth” and have no need for a definition anyway. Their goal is power and they will twist facts however needed to obtain it.

They have exchanged the truth for a lie and every honest person knows it.