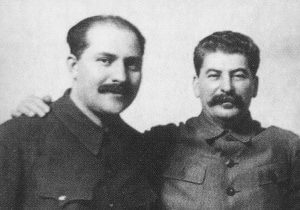 In reading about Russia’s invasion of Ukraine, I’ve come across sources that mention Russia’s economy, Putin’s historical revisionism, Zelenskyy’s background as an actor, Russian military tactics, oil pipelines, Finland’s military might, and the complex history between Russia and Ukraine. But I am amazed that there is one name that I have not seen mentioned anywhere: Lazar Kaganovich.

In a strange twist of fate, I am friends (not close friends, but friends) with Mr. Kaganovich’s grandson.  Sort of a long story.  I’ve considered writing about that.  But not today.  Regardless, as most of you know, Mr. Kaganovich was born to a Yiddish-speaking Jewish family in what is now Ukraine, became one of Joseph Stalin’s most trusted friends, and ended up being the leader of the Ukrainian genocide (the Holodomor famine) which killed 3-4 million Ukrainians under absolutely brutal conditions. He is remembered as one of Stalin’s most vicious henchmen.  Although my friend remembers him as a kind, doting grandfather.  Wow.  Anyway… 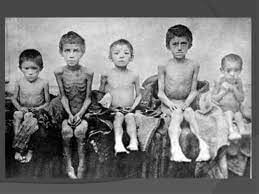 Ten years ago, I befriended a woman who moved to Tennessee from Ukraine with her junior high school daughter (who was in my daughter’s class – they became best friends).  I mentioned that I knew Kaganovich’s grandson, and my friend was shocked, but her daughter had no idea who he was.  She went to school in Ukraine until age 14, and had never heard of Kaganovich, who was responsible for the deaths of many in her family.  I wonder how many Ukrainians are unaware of this period of their history?  It was 90 years ago, so no one alive was there at the time.  But is it possible that no one remembers it at all?

Granted, Ukraine’s oppression under Soviet rule from WWII to 1991 was no picnic, either.  And perhaps it is the combination of these two events which is motivating Ukraine’s spirited defense of their homeland against Russian invaders.  They appear to have a much more clear understanding of what Russia represents than, say, President Biden.  And honestly, they should.

While we seem to be minimizing the evil of Russian leadership, that in itself may be proof of just how consistently evil they are.  For example: 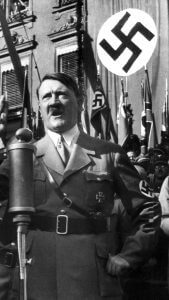 Imagine if 70 years ago, Germany had killed millions of Jews (which, of course, they did).  And then imagine that Germany invaded Israel today.  Can you imagine the press coverage?  Every Western news channel would run endless loops of Hitler speeches and Jews in concentration camps.  As they should.

But yet, here we are, with Russia invading Ukraine.  Again.  And there has been little to no discussion of Ukrainian suffering under Soviet occupation from 1956-1991, and no mention whatsoever of the butcher of the Holodomor, Lazar Kaganovich.  There are no screaming headlines of the evil of Putin, comparing him to Kaganovich (as the media would have compared Germany’s invasion of Israel to the Nazis).

Perhaps the media doesn’t bring up Kaganovich because they don’t have to.  The vicious tactics of Russia aren’t excused, exactly.  They’re just presumed.  After all, it’s Russia that we’re talking about here, right?  Perhaps.  But I really don’t think so.

I would feel better if we paid more attention to history.  Instead of reading story after story about how Putin feels about his progress in Ukraine this afternoon, perhaps we should be looking at this invasion as just a small part of a big picture.  This isn’t a shocking aberration.  It’s just another brick in the wall. 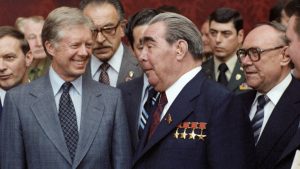 Putin may be unpredictable.  But Russia is not.  They even cheat in figure skating, for Pete’s sake.  Even when everybody knows they’re cheating, and they’ve already been suspended.  They lie, and they cheat.  After all, it’s Russia we’re talking about here, right?  Even Jimmy Carter figured this out.  Eventually.

But because so many in our media and our ruling class share Russia’s affinity for socialism, bureaucratic power, and other centralized control systems, they are hesitant to criticize Russia too harshly.  When your beliefs don’t make any sense, then hypocrisy becomes a cardinal sin.  Dissenting viewpoints become heresy when you know you’re on shaky ethical ground.  So criticism of Russia must be done gently.

Focus on the omelets, not the eggs.  Call Putin unpredictable.  But don’t call Russia a dangerous, dishonest, oppressive, imperialist power based on centralized control systems.  That just wouldn’t do.

This is just an understandable disagreement between some white dudes in Europe.  This is not evidence of the horrors of government power that American Democrats covet so openly.  Heavens no.  Golly, that Putin guy is so unpredictable.

Let’s fund Russia’s military by buying petroleum from them!  Great idea!  That way, we can pretend to believe in climate change, with no consequences!  Awesome!  Why not?  Russia’s just some other country, like Sweden or whatever, right?  What’s the worst that could happen?  Don’t listen to all those dead Ukrainians.  There’s fund-raising to do! 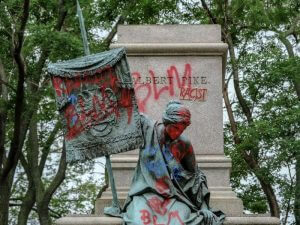 Many tyrants have openly acknowledged that you can’t control a country’s future without first controlling its history.  Islamists seek to control countries by destroying any ancient artifacts which don’t fit with Islam.  Putin just gave a speech claiming that his Russian ‘peacekeeping forces’ were merely attempting to free Ukraine from Nazi control (Ukraine’s Prime Minister is Jewish).  American leftists have been tearing down statues and renaming schools on a wholesale level.  All for the same reason.

You can’t control a country’s future without controlling its history.

And people wonder why those who love freedom are so upset about the historical revisionism of the left.  We should remember history.  Even the bad parts of it.

Especially the bad parts of it.