As usual, the sequel is worse than the original.

Those of you who live in places where the fire hydrants have six-foot poles topping them will find it laughable that anything in Texas can be called a “snowpocalypse.”  If you are used to something, that makes it easier to deal with, and Texas is definitely not used to snow and ice.  I’ve lived in Texas almost eighteen years and have only seen snow here five times.  Incredibly, four of those events occurred in the last four years, including last year’s hundred-year storm.  It’s a good thing we’ve got global warming or there’d be a lot more snowy days.  Based on evidence from the previous “disasters,” most Texans would not survive the state turning into Wisconsin.

The latest incident began a week before with warnings of the upcoming storm in the media.  Governor Greg Abbott announced that the power grid, whose failure had caused so many problems last year, was safe and no one would lose power.  Since that is an absurd statement, he backtracked and admitted that some people may have temporary outages.  So a politician realized that he made a mistake and corrected himself.  Or, according to Robert Francis “Beto-male” O’Rourke, Abbott lied because “he let corporate interests buy him off so he wouldn’t do anything to prevent the power grid from failing again.” 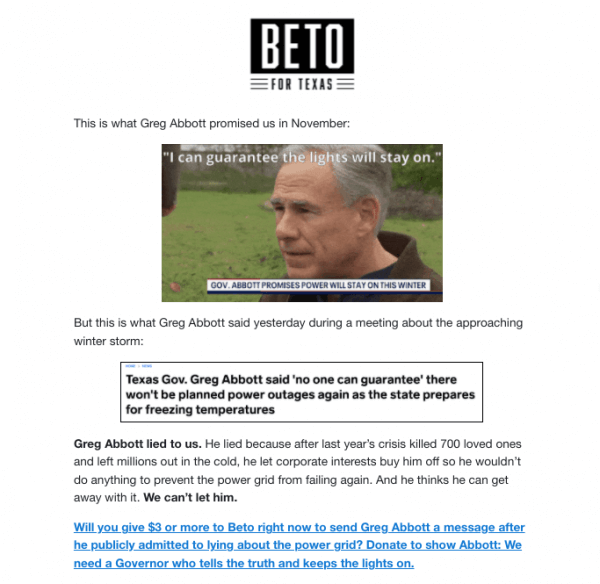 The Beto-male, who is running for governor for some reason, has made the power grid loss last year his raison d’être.   As you can tell, he was slavering over the possibility of it happening again.  Maybe another 700 people would die!  That will really help his prospects!

On Tuesday night, February 1st, and most of Wednesday, we had a cold rain but it never got below freezing.  That changed on Wednesday night when the temperature dropped into the teens and it began snowing.  The sodden ground was frozen and snow-covered Thursday morning.  We hadn’t lost power, but we didn’t on the first day of the storm last year, either.

Because of what happened last year, people took the storm warnings very seriously.  Most schools closed, as did a lot of businesses.  My wife’s clinic closed, so she didn’t have to go to work.  I wasn’t that lucky, as emergency rooms never close.  I gave myself an hour to drive the sixteen miles to the hospital.  My car was encased in ice, so I turned it on and kept it running while I put together my lunch, packed up an extra set of scrubs, showered, and got dressed.  After warming up for about twenty minutes, the car still had a coating of ice on the windshield.  I couldn’t find the scraper that I’d gotten last year and never used, so I had to make do with a plastic spoon to clear the glass.  (Again, for those of you who have to put up with this sort of thing every day for months, I know.  I promise I’ll read your posts about the  days of 90˚ weather you’ll have to endure this summer.)

After chipping away the ice, I thought that maybe an hour wasn’t enough to get to work on time.  However, the roads in my suburb were clear and I got onto the freeway without any problem.  I started out at a sedate 60 miles per hour.  I quickly passed three wrecked vehicles beside the road and slowed to 50.  Then I saw a pickup in the opposite lane skid and slam into the median barrier.  I backed my speed down to 45 and immediately hit an icy patch myself. I was able to get out of that without crashing and slowed even more.

Fortunately, there were only a handful of other people on the interstate.  Unfortunately, every single one of them was an idiot.  I started out in the right lane, but at every onramp someone would zoom onto the highway at full speed, then swerve around me.  I moved to the center lane and got bracketed by a pair of semis doing about 60.  I guess if you’ve got 18 wheels they don’t skid on ice the way four wheels do.  A little later, a group of five cars did the same thing, zipping by me on both sides going 20 miles per hour faster than me.  When I took the exit to the hospital, the final idiot tailgated me the entire length of the ice-covered ramp, then sped past me at the bottom.

Work was uneventful.  Again, lots of staff couldn’t make it in due to the weather, but there were fewer patients for the same reason.

At the end of my shift the next morning, I stayed at the hospital to sleep.  This time, I got put in a patient room, so I didn’t have to contend with creepy dolls, fright wigs, or staff members coming in to get equipment.  I worked Friday night and drove home without incident.  As I’m writing this on Tuesday, February 8, it’s 55˚ and almost all the snow and ice is gone.  We never lost power and there were no widespread outages in the state.

Bad news for the Beto-male.  Fortunately, the UT Football News has his back:

In the real world outside Democrat talking points, no one cares.  Last year was a disaster, but we literally weathered it, learned our lessons, and moved on.  Most folks realize that last year’s disaster was a result of a once in a hundred year event.  That means the chance of the same happening the very next year is about 1%.  (Someone check my math on this.)  And betting your entire campaign on something with a 1% chance indicates innumeracy mixed with arrogance.  It certainly does not imply leadership.