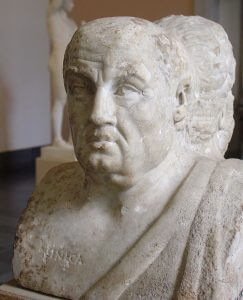 Did you know you’re not supposed to stake your happiness on money?  Yes, of course you knew that.  Even Disney movies know that. But sometimes we still need a reminder.

And what’s up with the gods? Why don’t they do a better job with things? Why bad things gotta happen to good people all the time, you know?

And did you know that philosophers talk about earthquakes?  They’re kind of interested in what causes them, but they’re mainly interested in learning to not be afraid of death.

And does anyone need a list of reasons anger can be dangerous?  Or some sage advice on avoiding anger problems by having the right priorities?

Or advice for being happy in these very troubled times we live in?

Seneca is one of the great Stoic philosophers, and the subject of my next series of YouTube/Rumble videos.  He’s the natural sequel to the Epicurus series. And here’s something nifty: Seneca even makes a point of praising Epicurus’ actual philosophy (while criticizing Epicurus’ followers) for its advice to keep desire under control and to be virtuous.

Here’s where you can subscribe to me on Rumble, and here’s the Rumble channel for Seneca, where several of the videos have aired. Here’s a YouTube Seneca playlist, where the new videos will air starting on March 10.