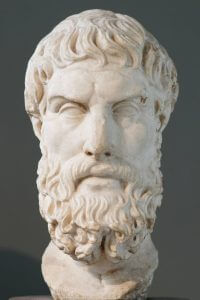 But if you have time and motivation to learn some basic Epicurus, it’ll be worth it. And you won’t need much time to learn the basics, because of two pointers on Epicurus below in this post. And also because I’ve recently recorded ten videos introducing Epicurus–enough to satisfy all your Epicuriosity about this great philosopher! Here’s the first video:

I don’t think the software knows how to embed Rumble videos, but you can click on that or just keep reading for the background of Epicurus.

Western philosophers before Socrates were usually interested in metaphysics, the philosophical study of reality.  (Thales: All is water! Heraclitus: All is fire! Anaximenes: All is air! Democritus: All is atoms! Pythagoras: Numbers exist! Anaximander: “The things that are perish into the things out of which they come to be, according to necessity, for they pay penalty and retribution to each other for their injustice, in accordance with the ordering of time!”)

Socrates turns to ethics. As Aristotle puts it, he brings philosophy into the city! He wants to know what virtues like justice and courage are, how to have a well-functioning soul, and what is the best form of government. He doesn’t care much for metaphysics; what the universe is made of doesn’t matter nearly as much as the good life!

And “What is a human being?” and “What sort of universe are we living in?” are metaphysical questions.

That’s why, from Plato and Aristotle all the way to Thomas Aquinas about sixteen centuries later, western moral philosophers study metaphysics and ethics. Their strategy is to learn what is the good life for a human being by learning what a human being is and what sort of universe he’s living in.

So our first pointer on Epicurus is: He follows the same pattern! His philosophy is a materialistic version of this. He thinks all is matter, and knowing the truth about this is the right way to be happy!

Some of the details: We have souls, but souls depend on the body, and they do not continue after death–so no need to worry about being punished in the afterlife.  Even more comforting, after death we won’t even be around, so we won’t be suffering, so death is no problem!  Also, while gods exist, they don’t need us, and they don’t get all whimsical and vindictive and punish us for ticking them off.  So stop worrying about the gods!  Happiness comes from having about as much pleasure as we can expect for a physical being, and, crucially, from not expecting more.

And our second pointer on Epicurus is: He says we need virtue to be happy!

Yes, virtue.  According to Epicurus, all is matter, and the good in life is pleasure.  That doesn’t mean we should eat as much ice cream and have as much sex as possible while the eating and the having are good.  It means controlled appetites, limited desires, and virtue as a way of achieving the most pleasure, of avoiding the most pain in the body, and of avoiding the most anxiety in the soul.

Here’s where you can subscribe to me on Rumble, and here’s the Rumble channel for Epicurus where most of the new videos have aired.  (It looks like two or three didn’t; I should check on that later!)  Here’s a YouTube Epicurus playlist with a few older videos, and where the new ones will air a bit later.