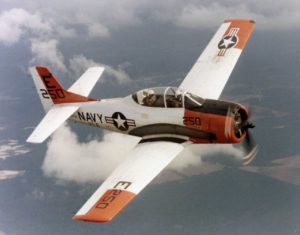 I started Navy pilot flight training in the summer of 1977 when the advertised time for a jet pilot to earn their wings was 18 months. Few actually completed their training that quickly due to weather and the aging fleet of training aircraft which made them a challenge to keep flying. In 1975 the Navy had begun transitioning to the new T‑34C Turbo Mentor but mechanical problems had delayed a full switchover and some squadrons were still flying the T-28 B/C, an aircraft whose first flight was in late 1949! Despite its age, it was a magnificent machine and fun to fly. It was a lot of plane for someone who’d never flown before but once you mastered its high power, it was solidly predictable. 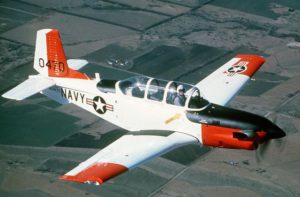 My first stop was Pensacola, Florida where I completed survival school. (Water immersion and helo splashdown training!) In August, new orders sent me to Whiting Field Naval Air Station, north of Pensacola for Primary Flight Training where I would be flying the radial engine-powered T‑28B Trojan. Its nine-cylinder Wright R-1820-86 engine and three-bladed propeller developed an eye-watering 1,425 horsepower!

Like all flight training, you started with ground school and emergency procedure training in a basic cockpit mock-up that looked and felt like the Trojan’s cockpit – all the dummy switches and gauges matched those in the aircraft and were positioned the same. 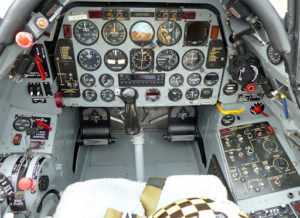 Finally in mid-September, I had my first flight and was definitely impressed. It was a far cry from the Cessnas and Pipers I’d flown with my dad. Though it was designed in the late 1940s as a replacement for the AT-6, the Trojan was still a powerful, heavy-duty acrobatic workhorse able to climb at over 3,000 feet-per-minute at full takeoff weight of 8,500 pounds. A joy to fly, the next two months passed too quickly and soon I had the 35 hours and necessary grades for selection to jet training. I quickly said goodbye to my roommate who had succeeded in getting his first choice – helos – and would remain at Whiting Field. 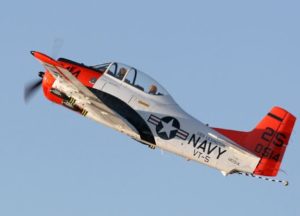 There are three flight training pipelines for Navy/Marine pilots. Each pipeline was unique, training students to fly either jets, helicopters, or props. Students in the “propeller/props” pipeline graduated to fly multi-engine turboprops like the four-engine land-based P-3 Orion Antisubmarine hunter (replaced in 2013 by the Boeing P-8 Poseidon variant of the 737) or the carrier-based E-2C Hawkeye (radar early-warning) and C-2 Greyhound Cargo aircraft (Carrier-Onboard-Delivery = “COD”). Marines had two pipelines: helos or jets. Marine C‑130 Hercules pilots actually went through the jet pipeline and could also be selected to fly the F-4 Phantom, the A-4 Skyhawk, or the AV-8 Harrier. 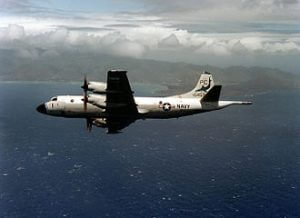 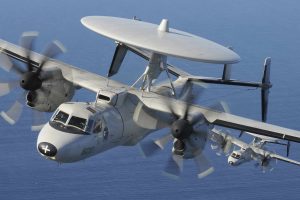 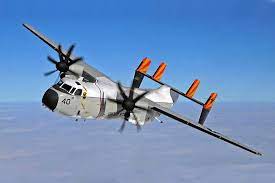 Whiting Field Naval Air Station (NAS) had three categories of flight students. There were pre-selection Primary students (like me), and the post-selection helo and prop students. The pre-selection first phase required 35 hours in the T‑28 Trojan doing landings, spins, and two solo flights. During that time, the Navy tried to determine which of the three pipelines would be the best fit. The needs of the service (where did they need pilots) didn’t always align with the desires of the student. If you were selected for jets, you immediately moved to one of the three jet training bases (Kingsville or Beeville, TX, or Meridian, MS). Those selected for helos or props remained at Whiting Field. 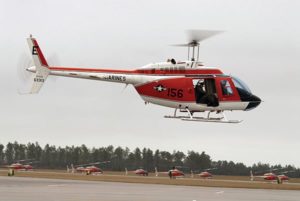 The helo students moved over to the helo training squadron to fly the Bell TH-57 Sea Ranger. Those selected for multi-engine props stayed in the T-28 and flew some additional formation flights and completed their instrument training before transferring to another base where they learned to fly their multi-engine fleet aircraft.

When I was in training, there was a push for more jet students. It was a couple of years after the end of the Vietnam war after which there had been a large “Reduction In Force” (RIF) that caused many pilots to be separated from the service. In typical government fashion, somebody suddenly realized that they still needed pilots.

My October orders read “Report immediately to Squadron VT-23 in Kingsville, Texas (southwest of Corpus Christi), to commence Basic Jet Training (in the T-2C Buckeye).” I packed everything I owned into my 1976 Mercury Capri II hatchback with a 2.8L V-6 and 4-speed manual transmission and headed west on I-10, arriving two days later at Naval Air Station Kingsville. I dumped my bags at the Bachelor Officers Quarters (BOQ) and checked into the squadron. There were jets flying everywhere. I couldn’t wait to get started!

But I would wait after all. After a month of ground school and recovering from having three of my four wisdom teeth pulled, I finally flew on December 14. It wasn’t a syllabus flight for me, but a “morale” flight (to keep me motivated). I was in an instructor’s back seat on a night flight as the airborne safety pilot for students flying their solo night navigation flights. I had a second backseat ride on a formation training flight in February before finally starting my own training in March. 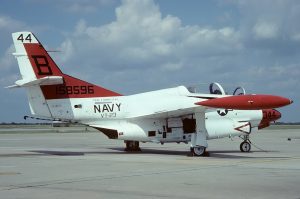 The Buckeye was the first jet flown by every future jet pilot (until it was replaced by the T-45A Goshawk in the late 1990s). It had a straight wing and two small jet engines for reliability and ease of flying. Its handling was predictable while still exposing students to the challenges of the higher airspeeds and maneuverability of jet aircraft.

It was designed as a trainer. Its low-mounted engines meant that when you add power the nose pitches up (or “down” when you pull power). But when “flying the ball” for a carrier-style landing, or flying formation, you don’t want the nose pitching up and down with power changes. A change in nose angle (of pitch) also changes the orientation of the tailhook to the main landing gear. When the nose goes up, the tail goes down. The hook is attached under the tail so it goes down too.

Worst case; if the nose pitches up just before touchdown, the hook goes lower and you could snag the wire before the main gear touch, causing a very hard landing. So T-2 pilots learned to coordinate the stick and the power. When you added power you pushed slightly on the stick. When you pulled power, you pulled back slightly. That’s how you kept the nose angle constant. And in formation, you had to use the same technique to maintain position on the lead aircraft.

This habit had to be unlearned when you graduated to the TA-4J Skyhawk with its centerline thrust angle. And most of the fleet aircraft were the same, with the possible exception of the S-3 Viking with its engines under the wings.

Bottom line: It was a good transition jet trainer. When a student had mastered its challenges, including his first carrier landings, he was ready to fly the TA-4J Skyhawk, a swept-wing, single-engine trainer based on the single-seat ground-attack A-4 Skyhawk. Between March and August of 1978, I flew 98 hours and made my first four carrier landings, qualifying to continue into the Advanced Jet Training syllabus which at that time was flying the TA-4J two-seat Skyhawk. Today’s jet students do all their jet flying in the T-45C Goshawk. 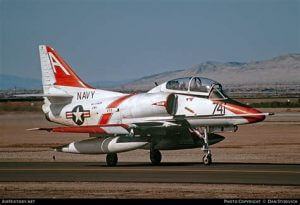 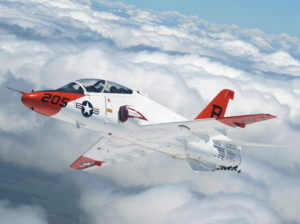 My first three TA-4J flights were just one month later but it required another year to complete the next 200 hours and six carrier landings required to earn my Naval Aviator gold wings. The week that I graduated, only one other student earned his wings. And there was only one “Fleet seat” available – to fly the F-14 Tomcat.

Normally the best grade and/or recommendations of the instructors would determine who received the highly-desirable Tomcat orders. But due to my desire to fly the A-7E Corsair, the only single-pilot jet aircraft then flown by the Navy, I agreed to let the other guy take the Tomcat orders. In exchange, I had to fly another 15 months as an instructor in the Training Command (a “Selectively Retained Graduate” – SERGRAD. Did I mention they were short of pilots?) with the promise of guaranteed orders to an A-7 squadron afterward.

I managed to stay out of trouble (mostly) for the next 15 months and as promised, upon completion of my instructor tour, I received orders to my first choice, NAS Cecil Field in Jacksonville, FL, to fly the aircraft I most wanted – the air-to-ground daytime light attack mission A-7E Corsair II. It would prove to be a great aircraft to fly in peacetime when no one was shooting at you. Its single engine turned out to be less dependable than I’d hoped, requiring me to eject one night from an otherwise perfectly good aircraft whose only fault was a failed engine that refused to restart! (See my Silken Letdown story.)

It had been a long but rewarding road. In my A-7 squadron, I would finally put all that time and training Uncle Sam had provided to good use. Not surprisingly, when my A-7 tour ended, they still needed training command instructors. By this time I’d met my future wife and was looking forward to being stationed in a squadron that didn’t deploy six months out of 18. I received orders to the “Fighting Frogs” of VT-19 at Naval Air Station Meridian, MS, where I would instruct in all phases of the T-2C Buckeye and make many lifelong friends.

Side Note: You might be surprised to learn that I had more close calls and near misses in Meridian than during my three years flying the A-7. Training is dangerous. Since the beginning of military aviation, we lose more pilots to training accidents than to combat. This article in Audacy.com details the number of active-duty military deaths from 2006 to 2020 and twice as many died in accidents (5,605) as in action (2,729). This is a sobering statistic and despite over two decades of “study,” the trend continues to this day. No one is shooting at you but the training environment can go from routine to “Oh [expletive]!” in a millisecond. Military flight training is just one of many dangerous occupations where a moment’s inattention or someone else’s mistake can kill you.