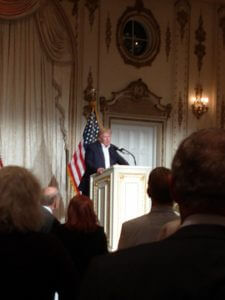 Yes, I did have dinner at Mar-a-Lago, but not exactly with former President Donald Trump. But I will tell you the whole story, and I hope you enjoy it!

We were invited to a very special dinner by Hillsdale College, and when we learned it would be in West Palm Beach, we were very excited. We immediately responded to the invitation in the affirmative and anxiously awaited the date, Jan. 26.

When we arrived precisely at 6 p.m. in our buttons and bows (it was suits and dresses, no tuxedos), we found the location, but at first glance it was just another beautiful Boca Raton business. Mar-a-Lago didn’t appear anywhere on the outside; we wondered if the absence had to do with security. We learned personally the importance of security when we were asked in the driveway by the guard if we had a gun in the car. My husband assured him we had ours properly locked up in a special box in the trunk.

Tell that to the Secret Service.

So we followed another guest who had brought his gun (who wasn’t quite certain where to drive — you know, men and directions and all) and drove to a nearby parking lot. We figured out it was the wrong lot, but oh well, we parked and walked back to the hotel. It was a very busy street with no sidewalks. (Another Secret Service requirement?)

After taking our lives in our hands, the security guard stopped us again, and we reminded him who we were. He was very apologetic, and we were very forgiving. We walked to the lobby to where the reception and dinner were to be held.

Everyone was very friendly and mostly old, and there wasn’t a face mask in sight. I realized that I was among my peers in more ways than one. We had our picture taken with Larry Arnn, Ph.D., the president of Hillsdale, and he asked if we’d been to the campus. I told him we’d shot there. He did a double take until he realized we’d attended one of the shooting workshops. We all smiled at my lame joke.

Later, we were just finishing a delicious dinner when there was a stir in the room. It was him! Donald Trump was standing nearby to greet us — well, I mean to greet the guests! The room rose to give him a standing ovation, and the Secret Service surrounded him and then escorted him to the stage. He spoke to us for a few minutes, and of course the group was thrilled.

Trump is a fan of Hillsdale College; he asked Arnn to co-author the response to the 1619 Project, called the 1776 Project. He was also delighted to know that Arnn has expanded the charter school project, n0w 49 schools around the country, with more being planned.

Just before Trump was about to leave, he told us that the beautiful room we were in (designed to his taste) was added to the hotel to accommodate his wedding to Melania (see just below). As he left, he was again surrounded by Secret Service agents; they must have been very concerned as he slowly left the room, stopping to greet people and shaking hands. 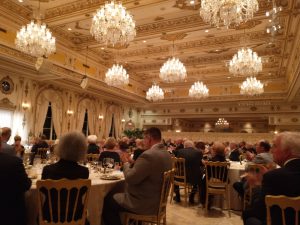 Arnn gave a delightful and moving talk. (Imagine following Donald Trump on the podium!) He reminded us, as he often does, of the importance of classical education, of the demands he makes on students and staff, and of his love of truth and beauty.

As we left and wound our way through the facility, we realized the Secret Service agents were everywhere; they were easy to spot with the small silver disk on their lapels. (I don’t know if they were electronic or not.) Some of them were distant and cool; others smiled and waved. It’s a dark reminder that there is nowhere Trump can go where his life would not be at risk.

Once we were outside, we saw the same security guard in the drive. We tried to talk him into taking us back to our car, but he couldn’t abandon his post. So we hoofed it back.

It was a very special night. To realize that we share a dedication to education, truth, and child and adult learning, and we share that with Donald Trump and thousands of other people, is gratifying.

As a final thought, we decided that it would be easier to stay in a nearby town overnight and planned to visit the Morikami Museum and Japanese Gardens (where we’ve visited before). We headed over there late morning and parked the car. There were clear signs that masks had to be worn inside, but we wouldn’t need them in the gardens. We shrugged our shoulders and dug out our masks.

But there was a line outside to get in; it must have been caused by the restrictions and mask demands. Jerry and I looked at each other, and I said, “Do you really want to do this?” His simple no sufficed.

We turned around and headed to our car.

We honored our commitment to freedom and against un-American demands.

It was still a lovely trip.