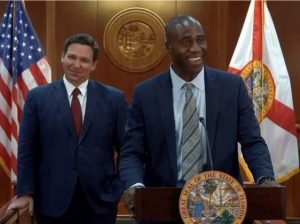 New Florida Surgeon General, Joseph Ladapo, is taking a beating from the media as well as the Democrats because of his opinion on COVID-19 and challenging the irrational messaging in the state. There’s no doubt in my mind about the reasons Gov. Ron DeSantis selected him, given the attacks he has personally had to sustain in Florida and nationally. And to date, SG Ladapo has shown himself to be up to the job.

Early controversy erupted when Dr. Ladapo explained his reasons for not wearing a mask when he was invited to visit with FL Senator Tina Polsky, who insisted he wear a mask when visiting her in her office. SG Ladapo pushed back against wearing a mask, since he believed that the mask, which would cover half his face, would interfere with effective communication; he offered, instead, to meet her elsewhere, including more spacious locations or outdoors, to accommodate her. (Senator Polsky recently was diagnosed with cancer, but had not told Ladapo.) She refused to compromise, and SG Ladapo was attacked for his decision. One criticism came from a black Republican minister, Dr. R.B. Holmes, Jr., who is a leading civil rights leader, denouncing Ladapo, DeSantis, and Education Commissioner Richard Corcoran. Holmes said:

We are extremely alarmed and saddened that the surgeon general would not meet with the elected state senator from Broward County when she asked respectfully, ‘Will you please, sir, wear a mask,’ the Rev. Dr. R.B. Holmes Jr. told a group of reporters at Tallahassee’s Bethel Missionary Baptist Church, where he is pastor. ‘For that top doctor to not wear a mask is disrespectful and dishonorable.’

Extremely alarmed? Disrespectful? I’m puzzled by this harsh response by the minister, since Ladapo would be contradicting his own message–that wearing masks adds very little protection for anyone, and they should be voluntary.

SG Ladapo is also not afraid to criticize the conventional wisdom, further supporting Gov. DeSantis. He issued a new rule that lets parents decide if their children should quarantine or stay in school if they are asymptomatic after exposure to COVID-19, instead of students being quarantined for at least four days. In addition, he questions the benefits of wearing masks, has condemned business and school lockdowns, and was one of the signers of the Great Barrington Declaration.

SG Ladapo also stated that getting a vaccine was a personal choice, which contradicted the Rev. Holmes who was on a mission to increase vaccinations among the black population:

‘There is nothing special about them compared to any other preventive measure,’ he said. ‘The great thing about the vaccine…is that it prevents the risk of serious illness. Fantastic. People get to make the choice about what they want to do with that information.’

But he said too much focus has been on vaccines.

He has also written extensively about COVID-19, and has been present in other forums:

He was featured in a video last year deleted by social media platforms for COVID-19 misinformation. Under the heading America’s Frontline Doctors, Ladapo was among those promoting President Donald Trump’s once-touted hyrdroxychloroquine as a cure for the virus and dismissing science that cast doubt on the compound.

He’s also not afraid to contradict the powers-that-be:

Dr. Ladapo harshly criticized his colleagues in the healthcare system, saying that their failed approach to treating COVID-19 ‘was a direct result of scientists—my colleagues, some of them—taking the science and basically misrepresenting it to fit their agendas, their interests, what they wanted to see people do. …And this idea that people don’t get to make their own decisions on issues of health related to their own personal health is wrong, and it’s not something that we’re going to be about.’

SG Ladapo is like a voice in the wilderness. I’m so pleased that he’s come to Florida.

He and Gov. DeSantis will make a great team.