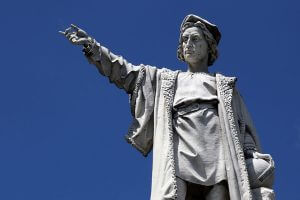 “I do not intend to prejudge the past.” — William Whitelaw

There’s a right way to do an Indigenous People’s Day and a wrong way.

The right way to do Indigenous People’s Day is to host a celebration of them, where all their cultural markers are observed.

The wrong way is to spend most of the event haranguing Italian Americans for celebrating Columbus, which is what many of these events turn out to be. These celebrations are not run by Native Americans, rather by people with political axes to grind. They often degrade into anti-American, anti-Italian, and even anti-Catholic speeches.

Indigenous People’s Day was created by the UN and has been celebrated on August 9 for decades. November is Native American Heritage Month. This push by political confrontationists to move it to Columbus Day serves no purpose other than to pit Indigenous People against Italian Catholics in a fight neither of them asked to have.

The organizers find themselves in interesting historical company. The first to oppose Columbus Day in America was the Ku Klux Klan. White supremacists have always hated Catholics and Italians and they lynched us. In fact, the largest mass lynching in American history was of Italian men.

Some people don’t understand the Italian penchant to celebrate Columbus because of the confusion over celebrating the Conquista (we don’t) and celebrating an Italian explorer (we do). Columbus had nothing to do with the Conquista.

In Hispanic countries, Columbus Day was about the Conquista — the conquest by Spain (not Italy) of the Western Hemisphere. That’s understandable since the bloodline of many people there lead back to Spain. It’s also understandable that the Indigenous People in Hispanic countries might not celebrate that — they were conquered. However, 500 years and 30 generations of intermarrying ought to have healed that wound a bit.

In America, Columbus Day is not even slightly about the Conquista of the natives. Columbus, who died in 1506 before the Conquista occurred, was Italian and an unparalleled heroic admiral. As Italian Americans and Caholics, we take pride that his maritime exploits led to the eventuality of the greatest country on earth, the United States of America. That’s right, an Italian’s vision did that and we thank God we are here.

Nothing against the Spanish, but we aren’t them. Italy didn’t conquer this hemisphere 500 years ago, Spain did. We don’t celebrate that; we celebrate Columbus, the man who had nothing to do with the conquest. He never even conquered the Caribbean, where he landed. He died thinking he was in the East Indies.

Yet the hate of these organizers of Indigenous celebrations is directed not at the Spanish (nor should it be), but at Italians. For what? Well, that has to do with American leftist politics.

Hispanic people are considered minorities, non-white and therefore unassailable. Italians, who suffered a history of ethnic discrimination in jobs and housing, were abruptly declared to be “white people” when Affirmative Action was developed, so we couldn’t take part in it. Now, when the left complains of “white people,” that means we Italians are the very people who discriminated against us. As if we did it to ourselves. Yes – identity politics is just that circular and fallacious.

Some of the rhetoric toward Italians is hateful.

First, there is an attempt to make European Italians better people than Italian-Americans by wrongly pointing out a lack of Columbus support in Italy. At one event last year, a speaker claimed there is not one Columbus statue in all of Italy.

Apparently, Italian Americans are as good as people everywhere. Columbus Day has been celebrated in Spain, Italy, Argentina, Colombia, Peru, Venezuela, Costa Rica, Chile, Mexico, and in the Caribbean. More than 30 countries have statues of Columbus, and there are hundreds of them in total, as far away as Egypt and Japan. They are celebrating an Italian explorer, not a Spanish Conquista.

The Irish Governor of New Jersey, Phil Murphy, quipped after a Columbus statue was torn down that Italians can just find some other Italian to celebrate. You know Phil, every Italian I know on March 17 puts on a green shirt and celebrates with his Irish neighbors. Never would we be so dismissive, so rude, as to insist on changes to their ethnic culture. Many of the speeches surrounding Indigenous People’s Day often tell Italians to change our culture, telling us to “go celebrate Frank Sinatra or something.”

Columbus is the most lied about historical figure. He was not involved in genocide, slavery, or rape as many event organizers and the Internet faux-history machine allege. The historical source documents from his time prove that. Let’s compare the usual lies about Columbus to the truth:

I support Indigenous People’s Day celebrations and would attend and donate to them (I have). Hispanic countries seem to be handling them and Columbus Day particularly well. They either combine them or separate them instead of destroying one or the other. Argentina’s is a “Day of Respect of Cultural Diversity.” Colombia celebrates “the encounter of two worlds.” Peru celebrates “Intercultural Dialogue Day.” Costa Rica celebrates “A Day of Encounter of Cultures.”

In the meantime, if you oppose Columbus Day, make sure you go to work on Monday.