Ever since some restaurants have opened up full time following partial or full shutdowns due to the pandemic, many of them are experiencing an uptick in abuse by customers. One restaurant owner in Erie, Pennsylvania, Chris Sirianni, decided he’d had enough. He decided to hold customers accountable for their bad behavior. Recently he posted the following sign on his business window: 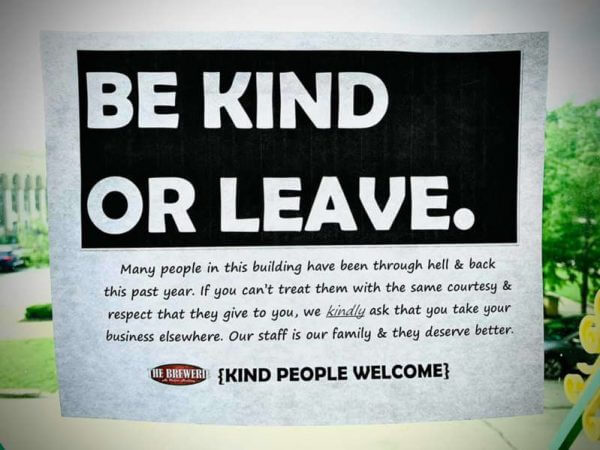 Simple, direct, and straightforward. Just my kind of guy.

Sirianni said: ‘During this pandemic, we’ve dealt with some of the most pleasant, courteous and thoughtful people as customers. But since we’ve reopened fully, there’s definitely a growing number of people who have become rude and short with our staff.

‘We always say in this business, ‘You get one disgruntled customer out of 100,’ Sirianni said. ‘But it seems like it’s grown to almost one out of every 10 customers lately being just rude or unpleasant from the get-go.’

Why are customers behaving so badly? Part of the problem is the limitations that the businesses have had to cope with:

‘It could be (prompted) by telling a customer that we’re out of crab or fish because the Canadian border’s closed and we can’t get that stuff easily. Or they might have an hour wait because we’re busy on a Friday or Saturday night,’ Sirianni said.

‘There was a time when most people were fine with that. But service businesses and restaurants are all seeing more and more of this collective anger.’

Sirianni posted this message on Facebook, and the response was overwhelmingly positive.

Customers have been demonstrating rude behavior nationwide. Slow service due to staff shortages, food shortages, and limited open hours are just part of the problem. Customers also bring their attitudes and stress from their daily lives and their accumulated COVID tensions to the restaurants. Impatience, feelings of helplessness, and unrealistic expectations that customers have of the staff are just part of the problem. An inability for many customers to recognize their own acting out prevents them from pulling back and modifying their behavior.

Sirianni comments further on his customers:

However, Sirianni has witnessed disrespectful behavior directed toward restaurant staff on several occasions and he considers it unacceptable.

‘I’ve seen our best and brightest employees be broken down by people,’ he said. ‘They’re servers, not servants. This kind of behavior makes it harder for people to want to do this kind of tough work.’

Nowadays, anyone who enters a business is benefited by realizing that he or she has no idea how well or poorly the business is functioning: its staffing, its stocking, its financial situation, and the many other factors that small businesses must cope with.

Let’s all try to be a little more patient and understanding when we do business at these places.

[photo from contributor to the Erie Times]