When I got married, I knew I wanted to have children. It was just what you did, right? I came from a family of eight kids. My parents and grandparents all had children. The only people that I was aware of without children were a couple of my aunts who had never married.

We’d been married just over two years when our first child was born. We made a plan; we made a baby; we had the baby! It was amazing! He was adorable, sweet, calm, so awesome. We decided to have another baby. We made a plan; we made a baby; she was born! She cried relentlessly for the first three months of her life. She had terrible colic, and occasionally, I’d just have to hand her over to daddy and walk outside for a moment or two of calmness. It was soooo different from the first baby! In fact, her personality was nearly the opposite of our son.

I got pregnant again when this little one was only seven months old!  The plan was to wait a couple of years; but, HEY, we made a baby. To my surprise, I found that three children were easier than two! I guess that once I learned how to deal with “more than one” it didn’t really matter how many more that was. The transition from one to two is very hard–but once you figure out how to do more than one, it’s cool. It’s just a lot more laundry. We went on to have five children in eight years. Yup…that was the Best and the Worst.

Worst #1: Labor contractions. Oh. My. And, once they start…you are just along for the ride! And what a ride! Maybe mothers develop some form of amnesia after a year or so and that is why we’re willing to get pregnant again. But once those contractions start up for the next birth, suddenly your brain kicks in and you’re thinking, “Good Grief! I forgot that this really, really hurts!!”

Worst #2: The Laundry. These children are all adults now, so when they were infants, disposable diapers were a brand new product. And they weren’t very good. Also, they were completely out of our budget. But, remember those eight children of which I am #3? I was old enough to change diapers on my youngest siblings, so I was a pro with the cloth diapers. But when you have five babies in eight years…someone is always wearing diapers. Always. For eleven straight years. No break.

Worst #3: Communicable diseases. We once had chicken pox for six straight weeks. The oldest one got it at church. His sister was in the same little group of children where her brother was infected. But, did she get it right then? No…two weeks later, after he was all better, little sister’s illness started.  And how did the second little sister  NOT catch it from her brother at the same time as her big sister? (We only had the three right then.) I don’t know. Two weeks later, we had the third round of the obnoxious fever and nasty little sores pop out. Yes, I know that now no one even gets chicken pox…I’m happy for you. Wish that vaccine had come a little sooner. (Yes…the other two brothers came down with the pox just the same way, years later…one at a time.) We did strep throat and head lice a couple of times, too, after the bigger kids started school.

Worst #4: Newly licensed drivers. OH. MY. The scariest thing I have ever, ever done, is sit quietly in the passenger seat while the newly licensed 16-year-old sits behind the wheel for their first drive with a parent. You simply cannot gasp or flinch or make little squeaky noises. It doesn’t help the new driver at all. When you make it home safely, you can go lie down or also go over the important little things you may have noticed. But it isn’t helpful to scream in alarm, no matter what your instinct may be.

Worst 4: After twenty-seven years of having children in your home, if you do your job well enough, they all grow up and leave and don’t need you anymore. Then, you’re left alone in the house–just you two, and the cat. It’s rather quiet.

BEST #1:  Giving Birth! That moment when the little person slid out into the midwife’s hands, and she lifted him/her up onto my chest, and Mr. CowGirl and I looked into that sweet little face, and the whole world stops…Well, that moment didn’t lose any luster just because we did it five times! (Actually, the first one was in the Navy Hospital, and the other four were born at home with the midwives helping.) But each time, Daddy was there to experience that amazing moment with me and we’ll never, ever forget the incredible joy we felt.

Best #2:  Daddy’s Coming Home! We lived in a canyon-filled area of San Diego when we were having our children. Mr. CowGirl rode his Harley chopper to work at the base where he was stationed while he served in the US Navy. Each afternoon, as I was cooking our dinner, the kids would be playing in the house, or in the yard, and soon we’d hear the unmistakable sound of the motorcycle chugging up and down the hills of the streets in our neighborhood. The gear changes, the whine as he slowed down to turn into our long driveway were the signal! Everyone would rush to the front steps of our funny little house and start jumping up and down and cheering. Moments later, the motorcycle would come into view and Daddy would pull up in his parking space under the big tree. He’d shut off the bike, and take off his helmet, and be instantly swarmed by three or four little people who were delighted to see him. He told me once, how on a rainy day when he’d ridden to work with another guy, and they’d stopped off at that house first, that he hadn’t truly appreciated his welcoming committee until then. As they stepped into the door of the co-worker, no one even looked up from the TV to say “Hi Dad!” Mr. CowGirl said how much he loved coming home because of the Cheering Section!

Best #3: Music, Music, Music! When we got married, between us, we owned a car, a motorcycle, an ironing board, and 300 LPs. He had a stereo, too. Frankly, we didn’t even own a TV and we didn’t miss it. We both loved listening to music so much. And reading books while listening to music. We also purchased LPs of the Disney movies, with the plot and the songs, so it was like listening to the movie. The kids memorized them! As the kids grew older, everyone took piano lessons for at least two years. After that, they’d have enough skill to know if they wanted to keep taking lessons, or if piano just wasn’t their thing. Then…the children got into middle school and started in the band. Three of them stuck with it for most of their high school years, too. So we had the joy (no…really, it was JOY) of being Band Parents for twelve years. We attended a lot of parades and football games, and concerts. We ate a lot of overpriced chocolate bars. What an awesome hobby! Where did our children get these musical gifts? Don’t know! But we got to chaperone trips to see Broadway musicals that the band or the choir from the high school attended, and that was amazing, too! One of my favorite musical events was coming home to a patio covered with amps and a drum set (borrowed from the high school) and the big brother showing the little brother how to hold his fingers on the bass guitar so that the other high school friends could join in on their instruments for a jam session. Or having the youngest son, at age 17, printing off the score of some classical music so that he could follow along while he took his date to a concert.

Best #4: Sitting alone in the house, just the two of us, looking at a bunch of photos, and reminiscing about the hike we took, or that day at the beach, or the county fair, or how much we laughed when I read the book “Danny, Champion of the World” out loud on the couch every night one week. Yes, we’re all alone now. Just us and the cat. But, our children still visit us, and call us, and send us photos of their kids. We’re old now, and the quiet is kind of nice, now and then. But all the memories are alive and well, and that really makes it the Best and the Worst of times….parenthood! 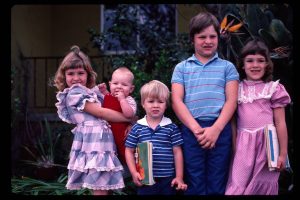