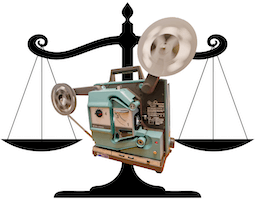 Recently, Scarlett Johansson filed suit against Disney for breach of contract, because they allegedly violated the contractual agreement under which Johansson acting in and promoted Black Widow. Her lawyers pointed out in the complaint the shift, after the contract was signed, from exclusive wide release on several thousand screens for the first weeks to immediate streaming, cannibalizing box office for the benefit of Disney executives’ compensation. Noting that other studios were doing the same thing, I wondered what would happen when a likable superstar in a kid’s summer movie got the same treatment. We now know, with the opening weekend box office results for Jungle Cruise.

Disney turned out to be a rat rather than a friendly mouse, perhaps another alternate storyline in the Disney Universe. They attempted to smear Ms. Johansson as a COVID-19 Cruella, seeking to profit off people getting sick and dying from going to movie theaters. They then revealed Scarlett Johansson’s substantial salary figure, suggesting she was a grasping woman. This brought an immediate response from three media industry women’s groups: Women in Film, ReFrame, and Time’s Up: 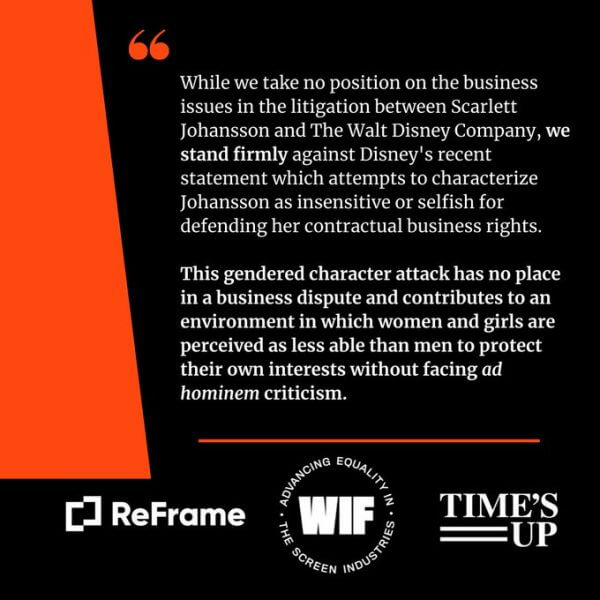 Johansson’s talent agency then joined the melee, throwing a sharply worded statement at the big rat.

“I want to address the Walt Disney Company’s statement that was issued in response to the lawsuit filed against them yesterday by our client Scarlett Johansson,” Bryan Lourd, co-chairman of the Creative Artists Agency, said in a statement. The agent, one of the foremost power brokers in the film industry, was incensed that Disney implied the actress was disregarding the impact of a global pandemic on the entertainment business.

“They have shamelessly and falsely accused Ms. Johansson of being insensitive to the global COVID pandemic, in an attempt to make her appear to be someone they and I know she isn’t,” Lourd said.

Lourd went on to note that Johansson has appeared in nine Disney and Marvel movies, which he said have earned the company billions of dollars in ticket sales.

“The company included her salary in their press statement in an attempt to weaponize her success as an artist and businesswoman, as if that were something she should be ashamed of,” Lourd added. “Scarlett is extremely proud of the work that she, and all of the actors, writers, directors, producers, and the Marvel creative team have been a part of for well over a decade.”

Jungle Cruise stars Dwayne Johnson and Emily Blunt. It is entirely a Disney product, where Black Widow was snapped up as part of Disney’s acquisition of Marvel. Both, then are streaming on Disney+ and are being promoted to pump up subscriber numbers. We see the results in a head-to-head first-weekend comparison. The whole picture is a horror show for movie theaters. First, Black Widow versus Jungle Cruise:

Black Widow outperformed Jungle Cruise in absolute numbers and per screen. This makes sense, as taking kids to the movies is more expensive than paying the premium for a new release on your big screen in the family room. Throw in renewed plandemic panic propaganda, benefiting Disney, Amazon, Apple, and former purely cable entities like HBOmax, plus these players’ collusion with the radical left Democrats. The dominant messaging is against going to the theater and for huddling at home punching the button for more services to be delivered contact-free into the home. 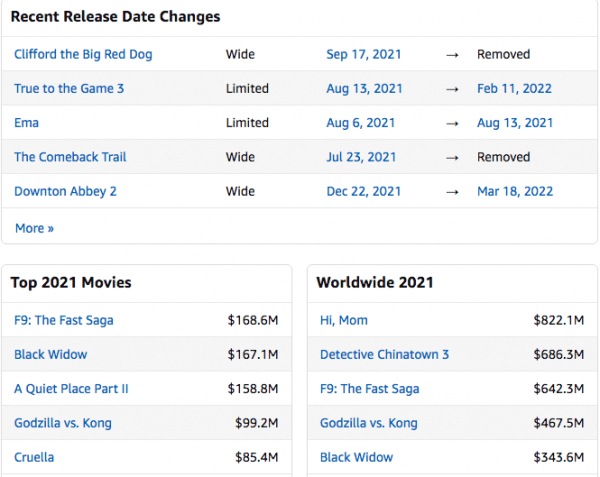 The Box Office Mojo front page tells a tale of things to come. Clifford the Big Red Dog will not be placed on the big screen next month. The comedy The Comeback Trail has also been yanked from movie theater distribution. Meanwhile, other projects are being pushed later, perhaps as a first step before just bailing on movie houses.

Consider just how poorly the top 2021 movies have done domestically, and then see how limited the worldwide 2021 box office has proven so far this year.

This cannot bode well for the popcorn palaces. It could be otherwise. I wish it were. But the big content producers have their own streaming services and were looking for any excuse to wipe out brick-and-mortar movie-going, capturing consumers in streaming subscription plans.

Published in Culture
Tags: Movies, Streaming, the Mouse is a Rat, Woke Disney