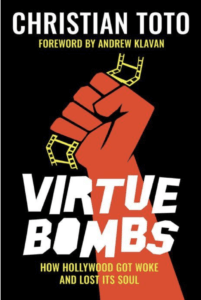 Hollywood has been liberal to far-left for decades, but in recent years it has become fully Hollywoke. Christian Toto, proprietor of the invaluable Hollywood-in-Toto website, is out with a new book surveying the wreckage of Hollywokeness: Virtue Bombs: How Hollywood Got Woke and Lost Its Soul.

I come to the conclusion that wokeism in Hollywood is arguably worse than wokism on the university campus, because it is much less transparent. While Hollywood makes endless movies about the supposed terror of the McCarthy-era “blacklist,” today’s Hollywood blacklisting against anything not fully woke is much more widespread and insidious.

We do look for some glimmers of hope, from new independent film production efforts from our friends at the Daily Wire and other enterprises, to rumblings in the Hollywood underground that some studio executives may be starting to get a clue that their relentless wokeness is bad for business.

Christian also has an excellent podcast of his own, Right on Hollywood, but of course listen to this one first!