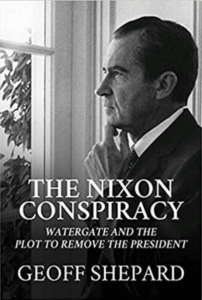 In this second half of my conversation with Geoff Shepard (part 1 here, if you missed it), we walk through the famous “smoking gun” Oval Office tape of June 23, 1972, which was the final straw that led to Nixon’s resignation in August, 1974. Except we’ve got the facts all wrong about what was actually being discussed. Shepard walks through the matter, and then moves on to his devastating evidence that the special prosecutors behaved unethically and perhaps illegally (such as committing “Brady” violations in not sharing exculpatory evidence with Nixon’s defense team). Much of this evidence Shepard has been able to pry loose only in the last few years, and there is more to come soon.

Finally, we draw some parallels to the January 6 investigation today, noting what social scientists might call “pattern recognition” about certain aspects of the way politics is driving the scene more than the law.

For more on the whole matter (including the original documents that Shepard uses to build his case), see his excellent website.

Announcement: I am leaving later this week for five weeks overseas, during which time this podcast will go partially on hiatus. John Yoo is going to try to step in for me and co-host some episodes of the Three Whisky Happy Hour with “Lucretia,” but I’ll believe it when I see (or more precisely, hear) it.