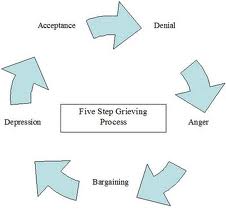 The famous Kubler-Ross stages of grief are: Denial, Anger, Bargaining, Depression, and Acceptance.

I’m a people person. I care about others. So as the hapless, amateur-hour Obama administration lurches from one self-inflicted mess to another, what I really want to know is this: how’s the press doing? You know, in the mental health department? How are all of those fawning, lickspittle toadies handling the collapse of their Chosen One?

Good news! They’re following the textbook. For the past year, it’s been a symphony of denial. But this summer, they slipped into anger.

Why is Obama such an unpopular president? It’s your fault. You’re too extreme. You have extreme views. Also: you’re crazy. You think Obama is a Muslim. Oh, and you’re a racist.

And they’re not just angry at you, you awful racist. They’re angry at the office of the presidency. Apparently, it’s just too, you know, complicated for one man. Even if that one man is The One Man. From Todd Purdum’s childish, in-the-tank, utterly unconvincing piece in this month’s Vanity Fair:

…the modern presidency—Barack Obama’s presidency—has become a job of such gargantuan size, speed, and complexity as to be all but unrecognizable to most of the previous chief executives. The sheer growth of the federal government, the paralysis of Congress, the systemic corruption brought on by lobbying, the trivialization of the “news” by the media, the willful disregard for facts and truth—these forces have made today’s Washington a depressing and dysfunctional place. They have shaped and at times hobbled the presidency itself.

Let me list a few of the stupider points. How, exactly, is Congress “paralyzed,” again? With bulletproof majorities in both houses? Isn’t the problem that Democrats and Obama face that they weren’t paralyzed? Is Todd Purdum so cocooned that he doesn’t realize this? Obama’s popularity isn’t that he’s done too little, it’s that he’s done way, way, way too much. And if the “sheer growth of the federal government” is a problem, well, um, maybe Obama should stop growing it.

It’s not even worth commenting on the “trivialization of the news” point, which manages to be both pompous and ignorant at the same time. You want trivial journalism with a “willful disregard for facts and truth?” Try being President Abraham Lincoln.

Deep down, though, they all know this president is a loser. That they anointed a turkey. But they won’t fully realize it until the last phase, Acceptance. Meanwhile, though, I’m really looking forward to Bargaining and Depression.

You could set your watch to this.