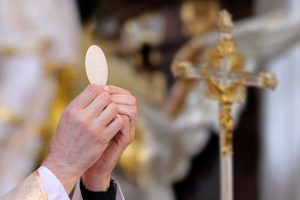 The US Conference of Catholic Bishops voted 168-55 to draft a document on “Eucharistic coherence.” A primary issue is whether or not pro-choice politicians can receive communion despite their fundamental disagreement with Rome. The debate gained steam with the election of President Biden, a Catholic who endorses abortion. Communicants are not supposed to participate in the Eucharist if they are in a state of sin and the Catholic Church considers this a serious sin.

Outrage spread across social media, blasting the bishops’ decision and demanding that all churches be taxed for “interfering with politics.” A few examples:

Next time I go to Church, I dare you to deny me Communion. https://t.co/bUmiyJ8TtH

Oh?! US Catholic Bishops are involved in Politics?

Welp – under Federal Law, you can't be "Tax Exempt" in that case.

I guess it's time to revoke that Tax Exempt status going back to 1776 – you can re-file ALL your returns as C Corps and pay the taxes plus interest.#Vatican https://t.co/mEUyLPmUN0

Targeting Biden and excluding him from the Eucharist because of his political stances makes the Catholic Church a political organization. Tax them.

As a non-Catholic in good standing, I’ll try to explain the doctrine to my fellow non-Catholics. Put simply, the Church denies the Eucharist to the non-repentant and to non-members to protect those people.

“Wherefore whosoever shall eat this bread, and drink this cup of the Lord, unworthily, shall be guilty of the body and blood of the Lord. But let a man examine himself, and so let him eat of that bread, and drink of that cup. For he that eateth and drinketh unworthily, eateth and drinketh damnation to himself, not discerning the Lord’s body. For this cause many are weak and sickly among you, and many sleep.” — 1 Corinthians 11:27-30 (KJV)

The Church wants the salvation of its members, not damnation, so the Eucharist is denied to people on those grounds.

If a person is in a state of sin, he should not walk up to receive Communion. If a priest knows that a communicant is in a state of sin, it is his responsibility to deny Communion. As the chief of sinners, I have experience in this. I’m tougher on myself than any priest, so when in doubt, I remain in the pew as the Eucharist is celebrated. I did the same for the two years I attended an Orthodox church before I was a member.

In the first few centuries of the church, non-members were not even allowed to witness the Lord’s Supper and banished to the narthex outside. After about three years of instruction, they would be baptized and partake of the Body and Blood of Christ only after promising not to speak of it to enemies of the church. This is memorialized in the prayer I have to say every time before Communion:

I believe, O Lord, and I confess, that thou art truly the Christ, the Son of the living God, who didst come into the world to save sinners, of whom I am chief. And I believe that this is truly Thine own immaculate Body, and that this is truly Thine own precious Blood. Wherefore, I pray Thee, have mercy on me, and forgive my transgressions, both voluntary and involuntary, of word and of deed, of knowledge and of ignorance; and make me worthy to partake without condemnation of Thine immaculate Mysteries, unto remission of my sins and unto life everlasting. Amen. Of thy Mystical Supper, O Son of God, accept me today as communicant; for I will not speak of Thy Mystery to thine enemies, neither will I give thee a kiss as did Judas, but like a thief will I confess Thee: Remember me, O Lord, in Thy kingdom. Not unto judgment nor unto condemnation be my partaking of thy Holy Mysteries, O Lord, but unto the healing of soul and body.

In both Catholic and Orthodox churches, priests are required not to serve Communion to known unrepentant sinners. If Father Jim sees I spent Saturday night Instagramming selfies snorting coke off a stripper’s hindquarters and I show up wearing the girlie bar’s T-shirt, he’ll kindly tell me to sit this Sunday out.

If you aggressively disagree with any church’s main doctrines, you probably shouldn’t be a member. I disagree with a few of Rome’s positions; that’s why I didn’t become a Catholic. Therefore, I have no right to demand they give me the Bread and Wine. It’s their religion and they make the rules. If I strolled into a mosque chomping on a BLT, the Imam would give me the boot. I wouldn’t respond by asserting my rights and demand taxation.

Hopefully, non-Catholics will better understand the Church’s position on “Eucharistic coherence” and Catholics will forgive any errors made.

Signed,
The Undisputed Chief of Sinners