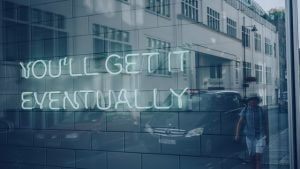 Given my recent “RA or it could be Lupus” scare (which has now been diminished to a “Boo!” with me barely flinching at the threat), I must admit that the thought had crossed my mind that God is finally getting me for my big sins.

It’s a sad confession, isn’t it? Anyone who writes under the pen name God-Loving Woman ought to be swimming daily laps in God’s infinite pool of grace. But old voices fade hard, hanging on by a thread now, whispering words of condemnation when the opportunities arise in low moments.

In the early days of my preliminary diagnosis, I took strange solace in accepting my fate as if it were some kind of delayed penance long-waiting for its due. It was a deserved punishment, and once paid, I would be at peace. In pain, but at peace. Which brings back images of Robert De Niro in Mission climbing, slipping, falling, and then trying again to climb the remote forest mountains dragging behind him his old armor, swords, and other medieval weapons of terror. It’s pride, you know. Thinking that we can do something to pay down the debt of our sin, as if we could.

Since the preliminary diagnosis, I’ve seen a rheumatologist. She took one look at my initial test results and said, “I don’t buy it.” She didn’t tell me why she didn’t buy it, and I didn’t ask. In any case, she ordered more tests.

As part of the Macon, GA. Beth Yeshua intercessory prayer team, I make daily requests to God for people dealing with all kinds of issues, most of which are health-related. I thought about it for a few days and finally sent in my own request. It was my first time. You see, I still have this idea that I can deal with things myself, that I don’t need any help, and people will disappoint me anyway, so why try? (Yes, I live a conflicted existence).

Then today, just this morning, I received the full complement of test results from both doctors. Here they are, including those pertaining to other issues found in the initial testing:

How am I feeling? Much better. There are still minor issues to be resolved, but they’re exactly that: minor. And instead of taking heavy-duty pain and anti-inflammation drugs (a particular one that means I can’t drink wine, which is absolutely unacceptable), I’m doing well managing my pain with Tylenol and ibuprofen.

Last night, my husband said, “How are you feeling?”

He nodded with a smile.

I looked at him for a moment and then said, “God healed me!”

His face lit up, his mouth dropped open, and he could only say, “Wow.”

Now, this afternoon when I see my primary care doctor, she may try to find some logical explanation for what has happened, blame it on the interference of the antibiotics I was taking when the tests were done … or something like that. I won’t blame her or think less of her; it’s what we do.

So, what am I getting at here? It’s this question:

Why is it that I’d rather point to something I can see, measure, control, evaluate, and explain as the reason for this amazing turnabout than to acknowledge and praise God for stepping in and working His healing will in response to my request for help?

Really … why is that? It’s more than pride: it’s fear of looking like a loon, or not wanting to trust God too much for fear of being disappointed (an argument I have never understood), or a conditioned response to mystery and our need to explain away everything … for what? To perpetuate the illusion of being in control? To sustain some sense of life’s predictability? It’s something. A little help here would be great.

Anyway, my eyes have been opened.

And my ears now hear these words.