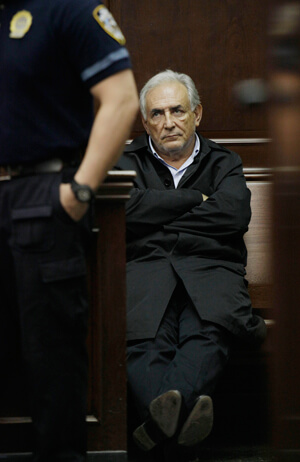 Back in 2007, when he had succeeded in getting Dominique Strauss-Kahn appointed as General Director of the International Monetary Fund, Nicholas Sarkozy is said to have warned the Socialist notable in a conversation that he would be well advised to mind his manners in the United States – where the public is less tolerant than the French of the antics of Latin lovers.

The story is almost certainly true. In France, as I pointed out in earlier posts here&nbsp;and here, DSK was notorious. Strict privacy laws prevented the press from reporting on his conduct and sheltered him for the most part (as they shelter many others) from public criticism, but they did not prevent talk – and Strauss-Kahn’s escapades were the talk of the town. Shortly after his appointment, when his former wife’s goddaughter Tristane Banon described on French television the assault she had suffered five years before when she met him for an interview, the powers-that-be bleeped out the man’s name. But everyone knew to whom she was referring. As French actress Daniéle Evenou remarked in a radio interview at about the same time, “Who hasn’t been cornered by Dominique Strauss-Kahn?” Jean Quatremer – Brussels correspondent for Libération&nbsp;– was gently saying what nearly everyone in the French political class thought when he warned at the time in a blogpost that DSK is “too insistent,” writing that “he often comes close to harassment,” and observing that this is “a weakness known by the media, but which nobody mentions. (We are in France.) The I.M.F., however, is an international institution with Anglo-Saxon morals. A misplaced gesture, a too specific allusion, and it will be a media scramble.”

Quatremer could and should have been much more blunt. Strauss-Kahn was often much more than “insistent,” and to call his gestures “misplaced” was a euphemism. As Bruce Crumley reports from Paris&nbsp;for Time&nbsp;what the prominent French Socialist did to Ms. Banon in 2002 and what he is accused of doing at the Sofitel Hotel in Manhattan a few days ago are acts in keeping with his standard operating procedure. As French lawyer Emmanuel Pierrat told him, “the news out of New York City last weekend was ‘something I had heard before’” several years ago when a young woman approached him and described&nbsp; “‘the modus operandi’” of her assailant, whom “’she said was Strauss-Kahn.’” &nbsp;What she described “’was almost identical to the details [described by] the woman [who said she was] attacked Sunday in New York.’” To this, Crumley adds,

“There were sufficient elements for a legal complaint to be filed and for a judicial investigation into them to be granted,” he says. But in the end, the woman chose not to go ahead. Pierrat explains that it was “because she knew there’d be a lot of public and media attention, knew she’d come under pressure, be cast as a liar, a woman who was looking for trouble, get tagged as the villain who took down Dominique Strauss-Kahn — or tried to. She knew there’d be a high price to pay for trying to do the right thing and knew she would probably be tarred for it.”

“In addition to my client,” says Pierrat, “I also have a personal friend who came to me and described an unwanted, forceful sexual advance by Strauss-Kahn that she was forced to literally fight off. They’re all essentially the same account, the same kind of behavior, with only the places changed.”

Pierrat is not alone, according to Crumley. “A Paris attorney who specializes in defending victims of sexual violence, who didn’t want to be named, says he has ‘an entire pile of complaints’ from women who say they were attacked by Strauss-Kahn.”

Like Pierrat, he says last weekend’s news evoked déjà vu. And like Pierrat, he says he has a consistency of accusations against Strauss-Kahn. “It’s all so similar,” he says. “The lock thrown on the door, the pulled or ripped undergarments, the physical force that turned violent as resistance mounted, all of it. And frankly, this isn’t at all incompatible with the skirt-chaser stories and reputation of an incorrigible ladies’ man. [Strauss-Kahn’s] defenders tend to say his conquests are seduction, and that while perhaps condemnable as adultery, they don’t constitute rape. But there’s another school of thought — favored by a lot of clinical specialists — who say someone that obsessed with sexual encounters is dysfunctional, an addict. They’re dependent on them, and when denied or otherwise frustrated, they snap and try to take it anyway. They are sick, and when their sickness takes full control, they lose all logic, lose rationality, and all reason and consequence vanishes in the impulse and violence of the act.”

&nbsp;There are others who are willing to talk, but tellingly, like the latter of the two attorneys, most of them prefer anonymity. One on Crumleys’s list is “a French-American p.r. executive” who “has also heard a lot of Strauss-Kahn stories.” &nbsp;In his view, “the New York City accusation is of a different magnitude.” As he puts it,

“In my work, I deal with a lot of people from politics and business, and when the same stories about the same people keep coming around and adding up, you figure Strauss-Kahn can’t always produce the same kind of smoke without there being a fire burning. And some of the people telling you this stuff do so approvingly — with that kind of ‘Is he the man or what?!’ admiration in their voices. It isn’t just enemies, opponents and journalists circulating this stuff.”

The executive takes pains to point out that there are different kinds of smoke and fire. “[Strauss-Kahn] clearly has sexual issues — not just how often he’s ‘on,’ but also in his treatment of women. The guy’s behavior is at times simply inappropriate, especially for a politician — and especially a politician who spends a lot of time in the U.S. I have three women friends who within the last two years told me they’d met Strauss-Kahn and been astounded at how quickly he’d asked for their mobile numbers. And each one told me that within a week of giving him their numbers, they’d gotten text messages from Strauss-Kahn inviting them to a hotel room he had rented. Three women, same story, same detail. Is it absolute proof his reputation is merited? No, but it supports that idea. But even if you can factually prove the man chases women as often as people say, there’s still a big difference between that and attempted rape. The former is supposedly about loving women too much to limit yourself to just one. The latter isn’t about loving women at all — it’s about aggression, violence. Different categories there.”

The unnamed French lawyer mentioned above adds one salient fact. Every woman who approached him was a member of the Socialist Party. As he explains, “I suppose he viewed that milieu as providing his supply of new women, and as one where women who caught his eye would either be compliant, or keep quiet about having to fight off his advances. Either way, there are a lot more women — and men — in Socialists circles who know about his activity than have ever said so.”

Crumley makes one other vitally important point – that “the case in New York City” points up “another dimension of the problem in France.” As Rokhaya Diallo, President of Les Indivisibles, an organization founded to defend the rights of immigrants, put it to him, “If I try transposing the situation in New York on Sunday to France, I just can’t do it. Not only because the woman is black and apparently an immigrant. But also because she’s a housekeeper. Perhaps even more than her race, her station in society would probably prevent authorities [in France] from taking her accusations against a rich and powerful man seriously. Racism is on the rise here again, but class discrimination has never gone away.”

As I said in an earlier post, what makes the sight of Strauss-Kahn doing the perp walk so disturbing to his compatriots is the fact that, in France, justice is for the little people. It is telling that Bernard Henri-Lévy, France’s leading public intellectual and DSK’s most vociferous defender, initiated a few years ago the petition – signed by Woody Allen, David Lynch, and the like – &nbsp;championing the cause&nbsp;of Roman Polanski. BHL is what you might call “an enabler.” If you move in the circles in which he is accustomed to move, you are apt to lose all sense of decency.

If you are inclined to suppose that I am being unfair to the French, you should read the article published in Libération&nbsp;yesterday by essayist and novelist Luis de Miranda. Entitled A Philosophical Hero, it takes it for granted that Strauss-Kahn is guilty as charged, and it celebrates what it calls “this savagery of desire,” acknowledging that what DSK did at the Sofitel Hotel may not have been “respectful of the diplomacy that ought to preside over an erotic seduction,” but suggesting nonetheless that the man up to that point slated to become the next President of France must now be “joyous” in the depths of his soul even if he is not yet ready to “confess” as much. “Such passage into action,” he writes, “at such a moment in his life history, can only be deliberate. Let me add that it is heroic as well.” Miranda interprets what he describes as a “political suicide” on the part of Strauss-Kahn as a “lively gesture” of &nbsp;liberation, and he evidently thinks it edifying – which is presumably an opinion also entertained by the editors of the Paris daily in which this remarkable essay appeared.