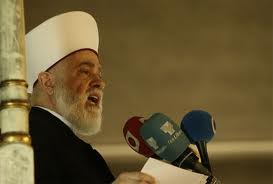 The Grand Mufti of Lebanon, Sheikh Mohammed Rashid Qabbani, held a meeting in Beirut last week with a delegation representing the 400,000 Palestinians living in Lebanese refugee camps. The meeting was called to address thefts of Islamic Wakf lands in Lebanon by Palestinians.

“We’ve hosted you and no longer want you,” Qabbani said. “I will defend Wakf lands, even if it costs me all I have.”&nbsp;

The Jerusalem Post&nbsp;describes&nbsp;the astonished delegation as attempting to “muzzle” Qabbani, sending him right over the edge. “You are trash!” he said to the Palestinians. “You will never be victorious. Nor will your cause. I’m no longer afraid of your weapons.” Then he threw them out of his office.

In Lebanon, as in most Arab countries, Palestinian refugees and their descendants are not allowed to become citizens of the host country. Until very recently, they were are barred from all but the most menial professions. Across the Arab world, they have been deliberately kept in refugee camps as a means of keeping the conflict with Israel an open wound, and they’ve now spent generations in squalor.

In many places, the Palestinians are loathed for their very hopelessness, as well as for the tendency of their advocates to come to town and completely destabilize the place. In 1970, the PLO tried to overthrow the Hashemite monarchy in Jordan, leading to the flight of Palestinians to Lebanon. Many of the refugees in Lebanon are thus descendants not of the exodus from Palestine in 1948, but the exodus from Jordan in 1970.

The Palestinian cause has long been trumpeted by Hezbollah as an excuse to pull Israel into war, so the Palestinians are firmly associated with the raining of destruction onto Lebanese heads. Hezbollah occupies the south of the country, has turned south Beirut into a desolate wasteland, and has wrested control over the government in a political coup, installing an Assad-approved Hezbollah puppet&nbsp;as prime minister. Hezbollah is stealing Lebanon from the Lebanese, and it is not only Westernized, secular Lebanese Muslims and Christians who are horrified by this.

Qabbani is on record as despising Hezbollah, perhaps even more than he despises Palestinians. “Sunni Muslims in Lebanon have had enough,” he said&nbsp;in 2008. He called Hezbollah “armed gangs of outlaws that have carried out the ugliest attacks against the citizens and their safety,” and even called out Hezbollah’s sponsor, Iran: “[I]t is regrettable and sad that an Islamic state is funding such infringements that hurt the unity of Lebanese Muslims.”