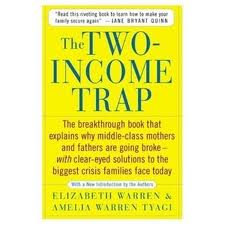 Did you ever wonder why, if the country is so much richer than it was when our parents were raising us, our generation seems to have to strain harder to make ends meet? &nbsp;A fascinating back-and-forth over the last couple of days has addressed the question–and caused a little dust to fly.

In the current issue of&nbsp;Weekly Standard, Chris Caldwell discusses&nbsp;Harvard Law prof Elizabeth Warren, whom President Obama named to oversee the formation of the new Consumer Financial Protection Bureau. The Bureau is a lousy idea, and Warren proved ham-fisted in defending it before Congress, so now she’s headed back to Massachusetts, where she may run against Scott Brown for the Senate. &nbsp;But put all that to one side. &nbsp;Chris read her 2003 book, The Two-Income Trap: Why Middle-Class Parents Are Going Broke, pronounced it a “brilliant and counterintuitive work of pop economics,” calling Warren herself “the most misunderstood woman in Washington.” &nbsp;

People were going bankrupt at an alarming rate….. &nbsp;Why this was so had nothing to do with consumerism. Parents spent 32 percent less on clothing, and 52 percent less on appliances. What they spent more on was big necessities: mortgages (up 76 percent), cars (up 52 percent), taxes (up 25 percent), and health insurance (up 74 percent). And the reason for all but the last of these was the entry of women into the workplace. Working mothers “ratcheted up the price of a middle-class life for everyone, including families that wanted to keep Mom at home,” Warren wrote. As a result, she showed, two-income families have less disposable income than one-income families did in the old days. What is more, today’s families are deprived of a safety net​—​a spare worker​—​of the sort her own family was able to lean on when she was a child. If anything goes seriously wrong in your average two-earner family today, they are in grave financial jeopardy.

Writing over at the Volokh Conspiracy, Todd Zywicki, a law professor at George Mason,&nbsp;has responded–and note that the emphases are his: Here’s the key problem in Caldwell’s argument: note his list of increased expenses for household “big necessities: mortgages (up 76 percent), cars (up 52 percent),&nbsp;taxes (up 25 percent), and health insurance (up 74 percent).” &nbsp;The problem is that while it is an accurate representation for mortgages, cars, and health insurance, that the expenses increase by that percentage, it is&nbsp;not&nbsp;for taxes. &nbsp;For the other expenses it is the percentage increase in dollars spent on those expenses. &nbsp;For taxes, however, the 25% increase is actually the percentage increase in&nbsp;the percentage of income&nbsp;spent on taxes. &nbsp;So the 25% is not how many more dollars go to paying taxes, it represents the household’s change from paying 24% of its income in taxes to 33% of its income in taxes–a change of 25% in the&nbsp;percentage&nbsp;of income dedicated to taxes, not a change of 25% in spending on taxes….

In fact,&nbsp;based on their data&nbsp;once the math is done the real conclusions of Warren and Tyagi [Warren’s co-author] are inescapable and in fact (as Caldwell will be pleased to know) extremely conservative: the financial problems of the middle class are caused by an astonishing rise in the tax burden on middle class families over the past three decades. &nbsp;Nowhere, however, will one read Professor Warren advocating income and property tax cuts as the obvious policy implication of their book–although that is unambiguously the logical inference.

To summarize the results of this little controversy:

Why are we straining to make ends meet? &nbsp;Because taxes are killing us. &nbsp;The liberals know that–as Todd shows, as prominent a liberal as Elizabeth Warren has run the numbers herself. &nbsp;The liberal solution? &nbsp;More government.

Really, this must end. &nbsp;It just must.